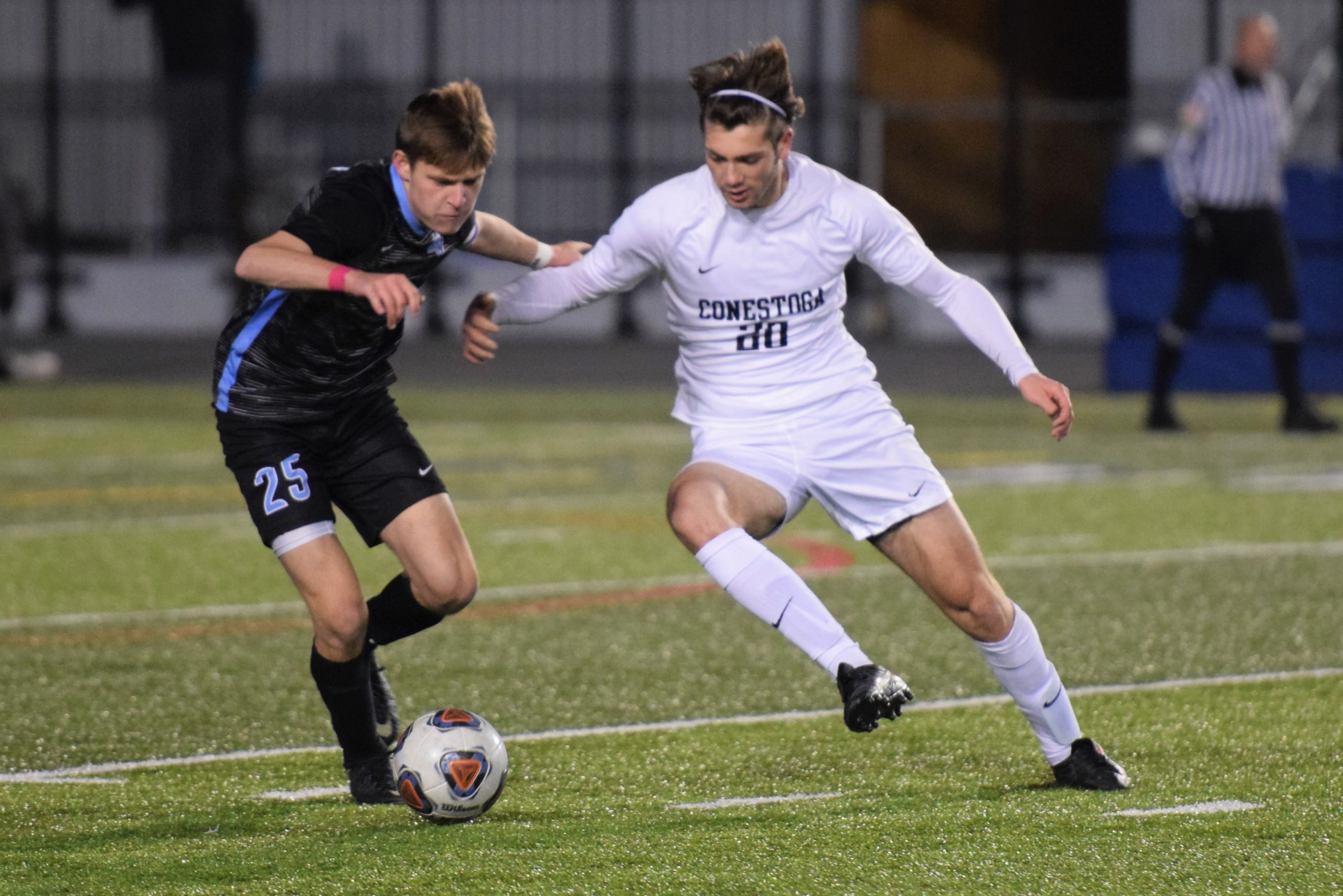 MOHAMED ELHENDAWY, Senior, West Chester Rustin – The Ches-Mont American Player of the Year, Elhendawy poured in 15 goals and added 10 assists for the Golden Knights. Speedy, strong and skilled, he was as dangerous as any forward in the district. Nearly half of his goals were game winners, and he notched another in overtime to propel Rusting in the second round of the District I playoffs. “His impact was felt throughout the season,” said his coach Ryan Castle. “He was one of the most physical players in the area.”

ETHAN JARDEN, Senior, West Chester Henderson – The Warriors’ top offensive threat, Jarden had a big hand in propelling Henderson to the overall Ches-Mont crown. With an uncanny ability to find the back of the net, the forward amassed 12 goals and 15 assists this fall and was a first team all-league recipient. He was either and first or second team All-Ches-Mont pick for the last three seasons. “Ethan was one of the top offensive players in our league,” said his coach Dom Popolizio.

DIMITRI MAKRIS, senior, West Chester Rustin – Not only a constant scoring threat, Makris was also at his best during key moments for the Knights. He wound up with nine goals and dished out six assists on the season. “Dimitri was an absolute terror to deal with for the opposing back line,” said Rustin coach Ryan Castle. “He came up with some big time goals in big games.”

MATT LOHR, Junior, Downingtown West – After missing last season due to an injury, Lohr had a breakout junior campaign. He amassed 26 goals (and eight assits) and wound up being the runner-up for Ches-Mont National MVP in 2021. “Matt was clearly our best player, and knows how to score,” said his coach Joe Sales. “He is very good with the ball and caused a lot of trouble for every team that we faced.”

SEBASTIAN TIS, Senior, Conestoga – The only player from the area to earn first team All-American honors from the United Soccer Coaches Association. The midfielder scored 11 goals, dished out 11 assists and was the Central League MVP. “Seb excels at all aspects of the game,” said his coach Dave Zimmerman. “He can shoot the ball from distance, is a crafty player with the ball at his feet, and he has excellent one-vs.-one take-on ability.”

COLIN DEAL, Senior, Bishop Shanahan – The Eagles advanced further in the post season than any team in the Ches-Mont, and Deal held down the middle and started most of the team’s attack. The midfielder finished with three goals and 16 assists, and was a first team all-league pick and team MVP. “This kid shuts down opponents in the middle of the field, starts our attack, is brilliant on the ball, and a tough kid,” said his coach Jim Kalavik. “And he’s easy to coach – he’s all business, all the time.”

GAVIN SEELE, Senior, Kennett – A multi-year first team all-area honoree, Seele was the Blue Demons’ MVP and an all-league pick. He led Kennett with 17 goals, and added nine assists. A tenacious defender in addition to scorer, Seele has signed to play college soccer at Penn. “I think Gavin is the best midfielder in the Ches-Mont and Central leagues,” said Demons’ coach Mike Barr. “He has a great first touch and has the ability to beat defenders consistently.”

KYLE McWILLIAMS, Senior, Downingtown West – An elite attacking midfielder, most of the Whippets attack went through McWilliams. He finished the season with seven goals and 14 assists. “The reason why we scored so many goals this year because of Kyle’s playmaking abilities,” his coach Joe Sales explained. “He is a shifty player that is great at manipulating players and playing great through balls to the forwards and outside midfielders.”

JOHNNY DIEDERICK, Senior, Malvern Prep – A first-team All-Inter-Ac selection, Diederich helped the Friars finish in third place in the league. The midfielder scored four goals, has committed to play collegiately at Dickenson and was a standout for the Under-19 Penn Fusion East Coast National League. “Johnny is very intelligent in reading the game, resulting in consistent interceptions and he’s dangerous in transition,” said his coach Susan Barr. “He’s an excellent one-on-one defender, strong in the air, has great stamina and is a fierce competitor.”

SIMEON DORSEY, Senior, Conestoga – Athletic, skilled and versatile, Dorsey was one of the best two-way players in the state. A centerback, he was a force all over the field, as evidenced by his 11 goals and six assists. On defense, Dorsey anchored a backline that surrendered just five goals in 26 outings, including zero in the postseason. “Sim is cool under fire and therefore a natural leader,” said. ’Stoga head coach Dave Zimmerman.

LORENZO VARGAS-CLARKE, Senior, Conestoga – A multi-dimensional threat, Vargas-Clarke was a mainstay in the Pioneers’ ultra-stingy defense. But in the attacking zone, he was also one of the state’s most dangerous weapons thanks to a throw-in that he wielded with the power and accuracy of a corner kick. It was the prime reason he led ’Stoga with 12 assists, which is very rare for a defender. He also added a pair of goals. Was a key contributor as the Pioneers capped off a perfect season with the PIAA 4A state title.

SEAN LOCK, Senior, Great Valley – A three-year defensive starter and a two-time All-Ches-Mont first teamer, Lock was unanimously voted the Patriots’ team captain. Described as a player with a magnetic personality, Lock was a forceful team leader. “He was a rock in the back for us, and he had a knack for scoring goals on set pieces,” said his coach Dave Moffett.

CHARLIE SMITH, Senior, Conestoga – It is hard to imagine any goaltender putting together a better season-long performance than Smith did in 2021. And then he capped it off by stringing together eight consecutive postseason shutouts to help guide the Pioneers to the program’s fifth state championship. During the regular season, Smith was a premier backstop, surrendering two goals in 18 games and was named All-Central League First Team. “Charlie had the lowest goal-against average (0.111) of any Conestoga keeper in the history of the school,” Zimmerman said.

The good old days for the Bishop Shanahan boys’ soccer program is now, and head coach Jim Kalavik has been in charge of a turnaround of epic proportions.

Early in his tenure at the helm, the Eagles suffered back-to-back single win seasons in 2012 and 2013. But by 2017, Shanahan captured the program’s first district crown, and the Eagles did it again in 2021 for the second time.

Along the way, his team went 19-5 overall this fall and advanced to the PIAA 3A semifinals, which is the deepest postseason run in program history, and the best among all Ches-Mont squads in 2021.

“To come from where we were a decade ago to being the lone survivor from the Ches-Mont in the playoffs, it says a lot about the program and our kids,” said Kalavik, the Daily Local News Coach of the Year.

“It’s been pretty impressive. A lot of the credit, besides the players on the field, goes to my assistant Mike Melesky. We haven’t missed a district tournament since he came here in 2014.”

Kalavik spent three seasons as an assistant coach for the West Chester Henderson girls, and two more as an assistant at Shanahan before taking over as head coach. He just finished his 11th campaign in that capacity.

“(Kalavik) knew exactly how we should be playing,” said senior striker Zane Domsohn, the Daily Local News Player of the Year. “And if something went wrong, it was so easy to talk to him and work it out.”