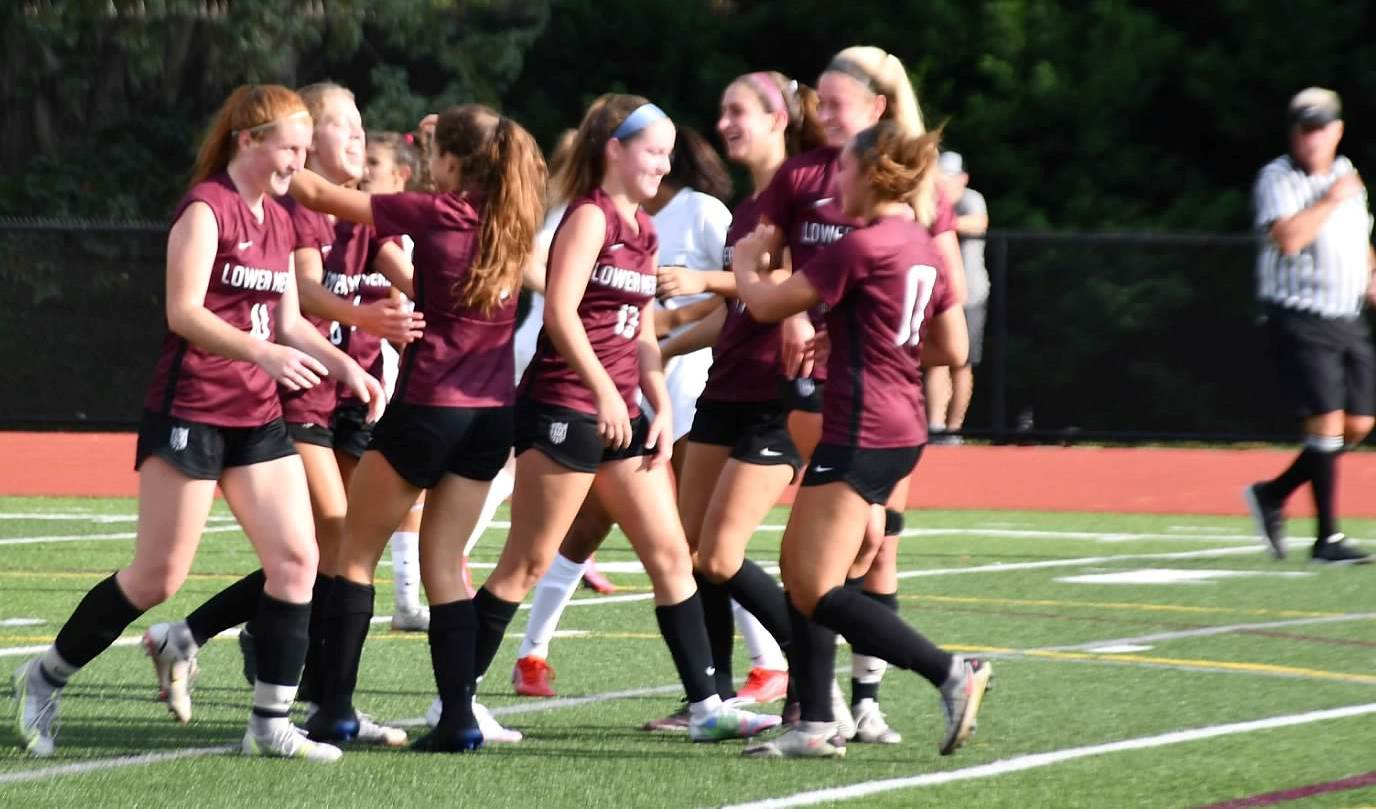 The Conestoga boys and Lower Merion girls soccer teams each have clinched a Central League title, and as of Monday Oct. 18, both teams were ranked No. 1 in the PIAA District 1 4A soccer team rankings.
As of Oct. 20, the Conestoga boys (18-0) were enjoying a 32-game winning streak, over two years. Last year, Conestoga posted a 14-0 record during the regular season – the Central League chose not to participate in PIAA playoffs last fall.
The Lower Merion girls (14-1) were ranked as the No. 1 team in PIAA District 1 4A girls’ soccer as of Oct. 20, followed by Owen J. Roberts (16-1-1). As of Oct. 20, Lower Merion was undefeated in the Central League (11-0).
In a huge matchup featuring two undefeated boys’ soccer teams Oct. 12, Conestoga defeated Lower Merion, 3-0. The Aces came into the game with a 7-0-1 league record, while at that time the Pioneers were 8-0 in the Central League.
Conestoga boys’ soccer head coach Dave Zimmerman said, “This game was probably our most significant regular-season game in my 20 years as Conestoga’s head coach. You had two undefeated teams that are ranked in the top two spots in District 1 4A.”
Going into the Oct. 12 contest, Conestoga was ranked No. 1 in District 1 4A, and Lower Merion was rated No. 2.
One of the Pioneers’ standouts against Lower Merion was senior midfielder Colin Wurth, who tallied a goal and an assist.
“Colin was really strong in the midfield, winning balls in the air,” said Zimmerman.
Freshman wing Cole Frederick tallied a goal and one assist, and senior attacking center mid AJ Nordone scored the game’s opening goal.
The Pioneers’ win Oct. 12 was their eighth consecutive shutout. This was the first time all season that Lower Merion had been shut out, and one of the key factors was senior center back Sim Dorsey.
“Sim did a nice job cleaning everything up in the back today,” said Zimmerman.
Two days later, Conestoga posted its ninth consecutive shutout, blanking Springfield, 5-0, to improve to 10-0 in the Central League.
As of Oct. 20, Conestoga has scored 61 goals and yielded only five goals, posting 13 shutouts. One of the key reasons behind the Pioneers’ phenomenal success this fall has been senior midfielder Sebastian Tis.
“Sebastian is the engine of our team, maybe our most dynamic player,” said Zimmerman.
On the same day that the Conestoga boys clinched the Central League championship, the Lower Merion girls’ soccer team clinched the Central League title with a 2-1 win over Conestoga Oct. 12 in a hard-fought battle pitting two of the top teams in PIAA District 1.
On Oct. 12, Lower Merion senior forward Hannah Blodget netted both goals for the Aces as they built a 2-0 lead by halftime.
Conestoga scored in the first 30 seconds of the second half on a breakaway by Abby Klebe to make the remainder of the game a very tense affair.
“The Conestoga game is always tough, and played with a lot of emotion,” said Lower Merion girls soccer head coach Kevin Ries. “Both teams played with the kind of intensity, talent, and heart you’d expect to see in a game of this magnitude.”
LM junior midfielder Elly Slensky wreaked havoc all over the midfield with some great support by junior defender Sadie Cohen, freshman Kasey Forman, senior defender Roberta Moger and sophomore Alex Dore on the back line.
Lower Merion junior goalkeeper Oriana Rose played her best game of the year with three tremendous saves in the second half to help hold the Aces’ tenuous lead.
In its first 15 games, Lower Merion has scored 52 goals, and given up only 11 goals. The Aces’ only loss was a 2-1 defeat to Abington Oct. 1. In the Central League, Lower Merion was 11-0 in the Central League.
Last fall, Lower Merion posted a 12-0 record, then lost two of its key players (Central League co-MVP Maya Masotti and first team All-Central League goalie Audrey Brown) to graduation last spring. This fall, the Aces have relied on depth of talent.
“We have had contributions from many different players this season,” said Ries. “Hannah Blodget and Grace Downey has led the offense, while Elly Slensky has controlled the midfield. The defense has been a big surprise for us considering that we lost our two center backs. Sadie Cohen and Kasey Forman have stepped right in and played tremendously.”
The Lower Merion boys’ soccer team (14-1-1) is ranked second in the District 1 4A boys’ soccer rankings, with their only loss to Conestoga and a tie with Harriton. As of Oct. 20, the Aces have scored 70 goals and given up only 10 goals.
Leading the way for the Aces have been senior striker Reid Joseph (who tallied 7 goals and 7 assists in the team’s first six wins), senior center mid Nathan Bradway (scored a hat trick vs. Haverford), senior forward Simon Rosen (13 goals in 15 games), junior forward Jack Forman (11 goals in 15 games), senior center back Luke Vaughan and senior goalie Michael O’Gara.