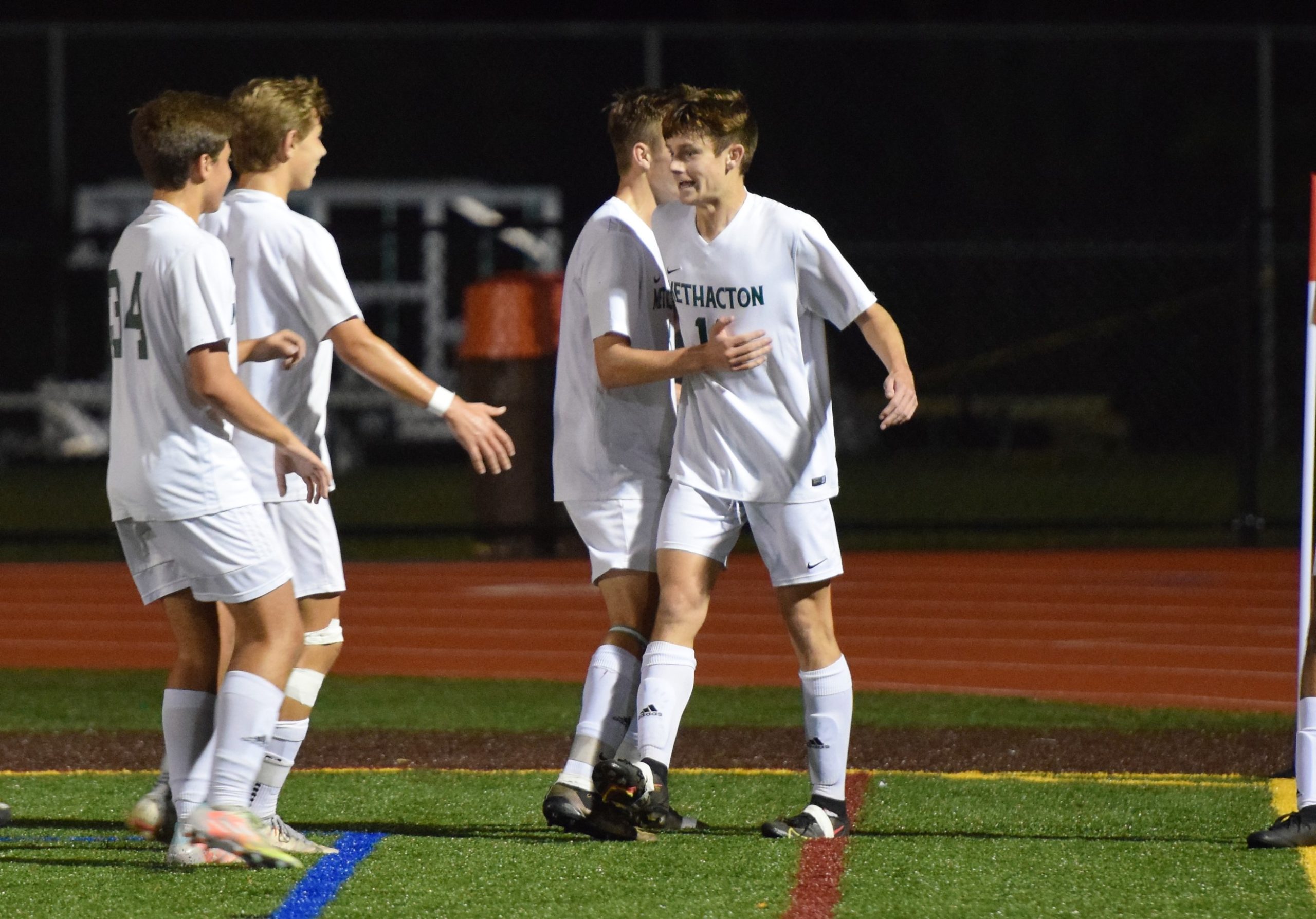 Program history wasn’t a big topic of discussion for the Methacton boys soccer team in the lead up to its match with Perkiomen Valley.

It may be Friday though, considering the history the Warriors made Thursday night.

Thanks to three pretty finishes from junior Zach Willen and senior Otto Hull and a gritty finish down the stretch, Methacton went into Perk Valley and came away with a 3-2 victory that clinched the program’s first trip to the Pioneer Athletic Conference Final Four.

The Warriors improved to 9-6-1 overall and crucially 8-3-1 in the PAC which locks in their first spot in the semifinals since joining the league in 2008.

Being the first was news to many of the Warriors, including goalkeeper Steven Remish (6 saves).

“I thought it had just been a bit of time. I didn’t know it’s the first time,” he said.

Two-goal star Hull learned earlier in the day that he and his teammates were trying to break new ground.

Fittingly, the midfielder and his teammates came out with sledgehammers in the first half.

“We knew what we had to do and we came here and did it,” Hull said. “The first half, we went crazy. Zach started us off with that goal that was an absolute banger and I put one in and it really set the tone.”

Methacton was on top early and rewarded when Willen received a pass from Lucas Capelini and made an outstanding turn to get around the right side and lashed it in stride into the far side netting at the 24:59 mark.

Thirteen minutes later Hull scored his first of the night with a lofted left-footed shot from the right side after the ball rebounded off a defender on the counter attack for the 2-0 lead.

“When we score a goal, we go to the corner flag, we all get into it,” Willen said.

Perk Valley, playing a direct attacking style in response to Methacton’s high defensive line,  answered quickly and generated three 1-on-1 chances against Remish but couldn’t cash in. Remish had a double save on a breakaway by Javier Schorle with 9:33 until half.

“When they got the second one on us, we had three or four of the highest quality goal-scoring opportunities of the first half and didn’t finish them,” said PV coach Zach Allen. “When they had two solid chances, they had clinical finishes on them.”

Methacton cooled PV off through the first 20 minutes of the second half while stringing together a high volume of passes and keeping the Vikings chasing.

“It’s the best feeling ever connecting passes together like that,” Hull said, “finessing it through the lanes, through the channels and getting in the box and finishing it.”

“They do a great job stringing together the passes and they use the space very well,” said Allen. “It made it hard for us to stay higher on them like we wanted to. Them being able to quickly combine and move through different thirds of the field negated us from being able to get on the front foot.”

Hull put the Warriors up 3-0 with 13:20 to play with a great piece of individual skill, his quick footwork beating his defender to get underneath and finish left to right past PV keeper Justin Angelo (6 saves).

The game felt like a wrap, but that was incredibly short-lived.

“Especially once we got the third goal, we were feeling like we had the game on lockdown. Maybe a little too much to the point where we started to drop off because they really brought the pressure,” said Remish.

Less than a minute later, PV created a scrum in the Methacton penalty area off a restart and Owen Slack played a backheel from the end line that Schorle got on the end of from point blank range.

PV created another moment of chaos for the Methacton defense and Justin Tagert’s shot from distance was tipped by Remish, who was pulled out of his goal, but fell in to make it 3-2 with 2:21 remaining.

Methacton saw the game out over the final two minutes and booked its place for next Tuesday’s PAC semifinals, to be held at Owen J. Roberts.

That appeared improbable two weeks ago following a 5-3 defeat to Norristown on Sept. 28, which was the Eagles’ first-ever PAC Liberty Division victory.

It was an inflection point for head coach Dave Stevenson’s Methacton, which is 5-1 in PAC play since.

“We had a whole team talk, sat down for 25 minutes after the Norristown loss and talked it over,” said Hull. “We got it together after that. Our coaches really pushed us.”

“This is by far the most amount of effort put into every game, every practice by any team I’ve ever played on,” Remish said. “We never get beat on work rate.”

Perkiomen Valley, ranked No. 11 in the District 1-4A power rankings, closes out PAC play against Spring-Ford on Saturday and will meet Dock Mennonite on Oct. 22.

“I’m feeling pretty good with how we’re playing,” said Allen. “Our effort has been high. Bouncing back from two weeks ago when we lost to (Methacton), we’ve had a good non-conference win, a win against Boyertown, wins in 3 out of 4 going into this game. We’re still trying to get to the next level. We’re missing a piece here and there, but I think we’re still improving and we’re creating opportunities.”

Currently No. 20 in the District 1-4A power rankings, Methacton visits Norristown Saturday and has scheduled a non-league match with Radnor next Friday.

They’ll hope to be booked the day before, when the PAC championship game takes place.