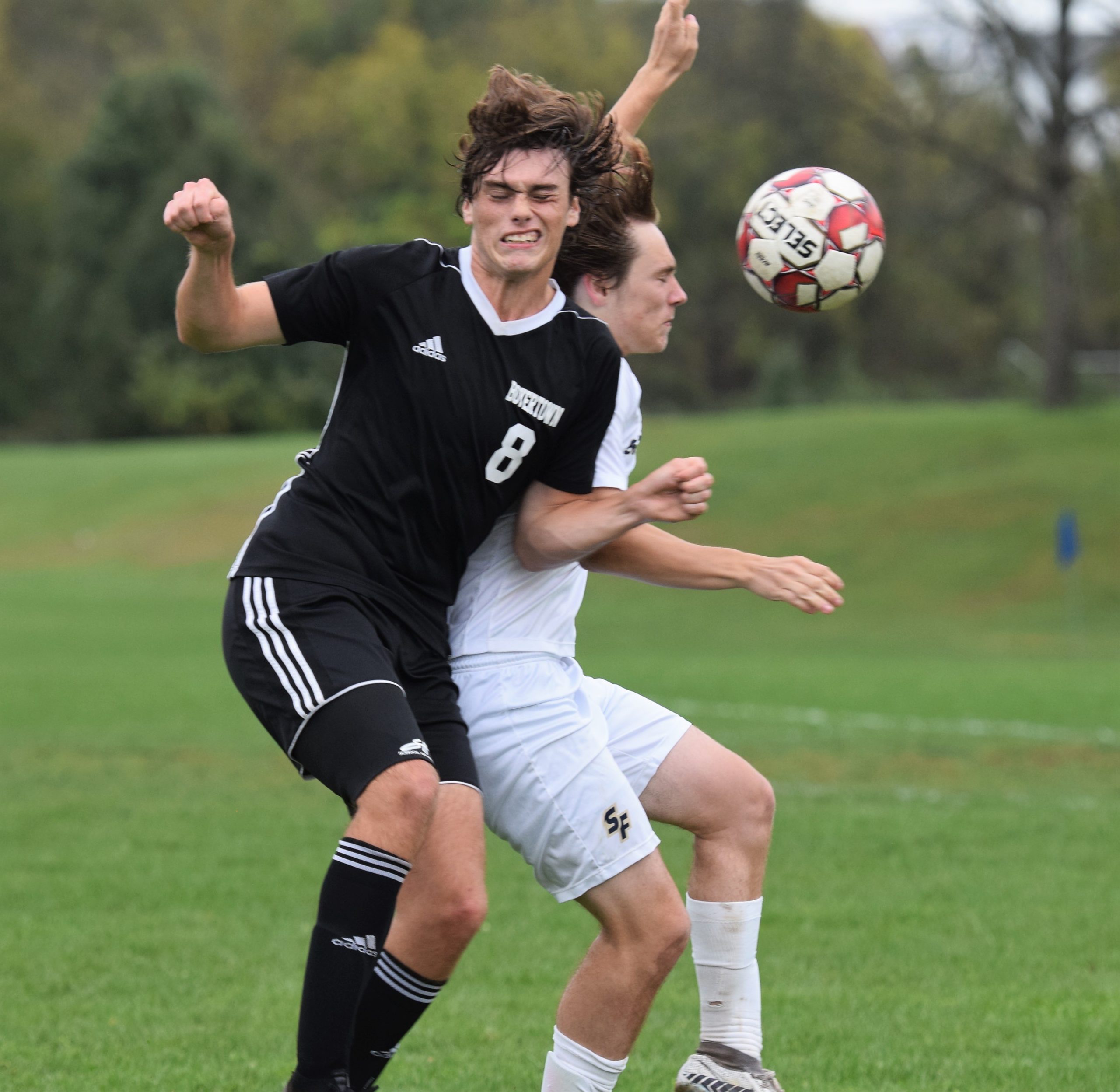 He didn’t get his way on the Bears’ second. But that is not a bad thing unless you’re a Spring-Ford team member or supporter.

Though the ball found Wenger’s hands to take Boyertown’s penalty in the fourth minute, the senior forward and returning All-State player unselfishly wanted it to go to penalty-earner Colin Eisenhard to convert the kick.

Sixty-five minutes later, now with the game tied and 10 minutes remaining, Ryan Goffice was fouled in the penalty area and feeling equally unselfish, whether Wenger liked it or not.

“I’ve got a hamstring problem so I’m not trying to force anything, make anything worse,” said Goffice, who was back in action after missing last week due to the injury. “I handed (Beckett) the ball and said, ‘Put it in the back of the net.’” Wenger, as requested, scored the ensuing penalty kick and then sealed the game on a counterattack breakaway less than three minutes later to deliver Boyertown a 4-2 Pioneer Athletic Conference Liberty Division victory over surging Spring-Ford.

Returning PAC champion Boyertown bolstered its place atop the Liberty at 6-1 (9-1 PAC, 10-3 overall) and captured a season sweep against Spring-Ford, which ended the Bears’ season in the District 1-4A playoffs in 2020. The Bears appeared to be in charge up 2-0 on Eisenhard’s PK and Alex DeForge’s far-post tap in of a Kegan Foster (two assists) cross in the 29th minute.

The Rams bossed the start of the second half and were deserving of the tying goal when a Ram header on the edge of the Bears’ penalty area fell to Ricevuto, who played in Justin Russell for a well-taken left-footed finish to make it 2-2 with 35:37 to play.

“We talked about wanting to press them more like they did to us in the first half and that worked out for us,” Kissel said.

Spring-Ford continued to control the game and had a pair of great scoring chances for Ricevuto and Luca Carboy that weren’t converted.

“It’s been a common theme this year where we drop off after scoring one or two goals and we have to come out once they score back and maybe even it up,” said Wenger. “Something triggers and we go out and play our game and score goals.” The deadlock broke after a long free kick from Matt Selders caromed off Foster behind the defense and Goffice was fouled running on to it inside the 18.

Wenger converted the Bears’ second penalty kick of the game, then three minutes later pounced on a breakaway chance on a long ball over the top from Foster to cap the scoring.

Despite Tuesday’s result, Spring-Ford has risen to the occasion after a poor start to the year. With a five-game win streak, including a win over then-No. 3 ranked West Chester Henderson, it is back in good standing to return to districts (No. 6 entering Tuesday) but has an uphill climb to reach the PAC Final Four.

“Positionally we’re figuring things out and getting guys in the right spots. They’re working hard at practice and trying to address some of the issues we had.” Kissel said. “Beating Henderson was big for the guys so I think that helped with our confidence.”

Russell and junior David Alban have been the engines of the Ram attack while center backs George Nearthly and Matt Henzler have been stabilizing presences on the back line.

It hasn’t entirely been smooth sailing for Boyertown – it was routed 6-0 by Henderson on Sept. 25 and fell 2-1 to Owen J. Roberts on Sept. 28 – amid a string of injuries that had half the starting 11 out. But they’re getting healthier and keeping their status as PAC frontrunner.

“It’s a high school season where you’ve got 18 games in however many days where you’re playing every 2-3 days,” Wenger said. “We’re trying to get healthy, on the return. (Goffice) came back today, Justin Patten came back from an ankle sprain, Colin (Eisenhard) has come back. Once Chase Bartman and Connor Oelschlager come back we’ll be at a full 23 and hopefully we’ll be able to stay healthy from there.”