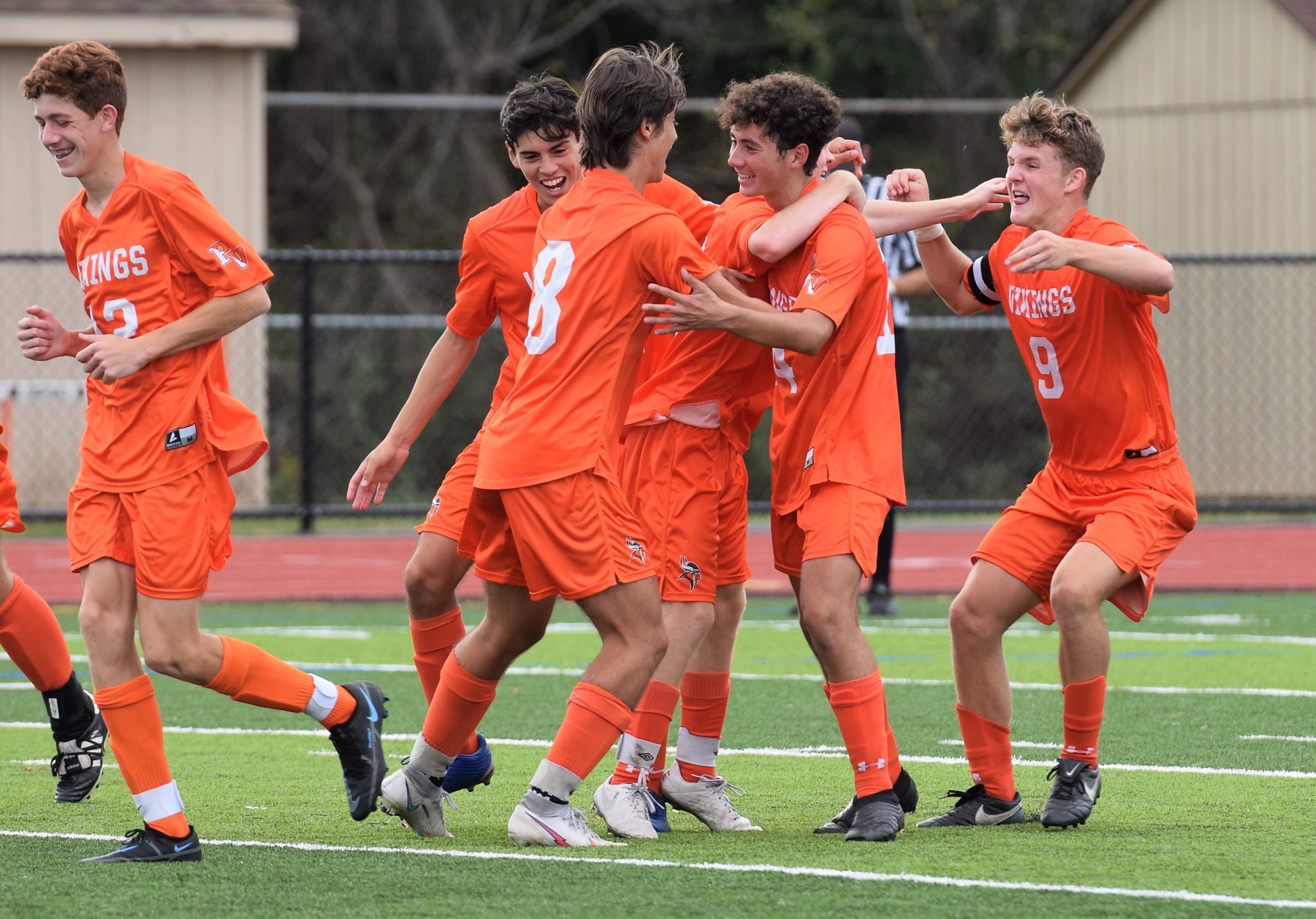 Perkiomen Valley's Sean Schoeniger (14), smiling center, is congratulated by teammates after his goal in the second half against Upper Perkiomen Tuesday. (Austin Hertzog - MediaNews Group)

GRATERFORD >> Four games in five days is a big ask for any team.

But the Perkiomen Valley boys’ soccer team has been capably answering questions so far this season.

The Vikings capped a tough stretch with a hard-fought 2-1 victory over Upper Perkiomen in a Pioneer Athletic Conference crossover game Tuesday afternoon.

Sophomore Sean Schoeniger’s well-struck 20-yard shot was the game-winner after a poor 6-yard kick from Upper Perk put the team in scramble mode three minutes into the second half.

Nick Aron got on the end of a booming Anthony Durrant free kick with a looping header to open the scoring in the Tribe’s favor 7:24 into the game. Eight minutes later, senior winger Owen Love was taken down in the penalty area and Owen Slack converted the penalty kick to level it 1-1.

Buoyed by a 3-1 win over rival Spring-Ford on Monday, Perk Valley capped the stretch with three straight wins to improve to 6-2 overall (3-1 PAC Liberty, 5-1 PAC).

“It was a good team performance,” said Slack, a returning All-Area second team choice. “We’ve had better performances, especially against OJR and Spring-Ford, but we fought through and got the result and that’s what matters.”

PV could have been forgiven for an emotional letdown after defeating Spring-Ford at home for the first time in head coach Zach Allen’s five-year tenure, but it was ready to move on quickly according to Love.

“It of course felt good to get one over on our rival and it was a great win for the team, but our mentality is ‘on to the next,’” Love said. “It was on to this really good team and we focused in the whole game.”

On the other end, Upper Perk was unlucky to come away empty-handed from a game they were largely the aggressor and had more consistent play than the Vikings due largely to its tireless midfield of David Schwab, Matt Milkowich and Mateo Schneidt. The Tribe dropped to 4-3 overall but sits second in the Frontier Division at 2-1 (3-2 PAC) behind only 4-0 Upper Merion.

“I felt like we had a really good game,” said UP senior center back Durrant. “Our passing was on, our defense was on point, midfield checking to the ball, our communication was strong, we just needed to finish our shots more.

“The PK they had was unfortunate. If we play them again, I think we have them.”

Upper Perk has a brand new defensive line with Durrant and sophomore Ben Goodrich taking over for the graduated duo Michael Fisher and Jack Cupitt. They’re flanked by outside backs Blake Schwenk and Nick Durrant.

“I played defense way back, in club playing wing back for like four years,” Anthony Durrant said. “Kyle came up to me last year when Michael got hurt and said ‘You’re going to be center back next year.’ I was ready to take on the role on defense.

“Over the summer I trained, we ran a Murph every Sunday, got the guys in shape and we also worked together on defending all summer.”

They largely did well against a PV team that is the highest-scoring team in the PAC at 25 goals. While not at their best Tuesday, the Vikings still found ways to convert.

“We’re grateful to be scoring so many goals,” said Love. “To beat OJR by that much (4-1) and scoring goals like we are – even against Rustin we put up three and fought back – and we’re just pushing through to the end and having the drive to score.”

Love’s “shifty, stop-start” attacking style and pace to get past defenders contributed to his second penalty earned in as many days.

Javier Schorle and Adam Natoli have been a bright spot in the attack alongside Love and Slack while Schoeniger and senior Ben Watson have been manning the midfield.

Defensively, senior Ethan Witkowski moved from midfield to defense and pairs with junior Luke Hansen. Along with outside backs Jason Taormina and Lawson Finger, the PV defense didn’t allow Upper Perk a shot on goal in the second half.

Hansen had the defensive play of the day when he headed a David Schwab shot off the goal line when goalkeeper Justin Angelo was pulled out late in the first half.

“I think we’re doing a little better than we thought we’d do,” said Slack. “Our two losses came against really good teams, West Chester Rustin and Boyertown, and we’ve beaten some very good teams like Upper Perk and Spring-Ford. Hopefully we just continue it.”