Michalak, Clair both score twice in 2nd half as La Salle shuts out Archbishop Wood 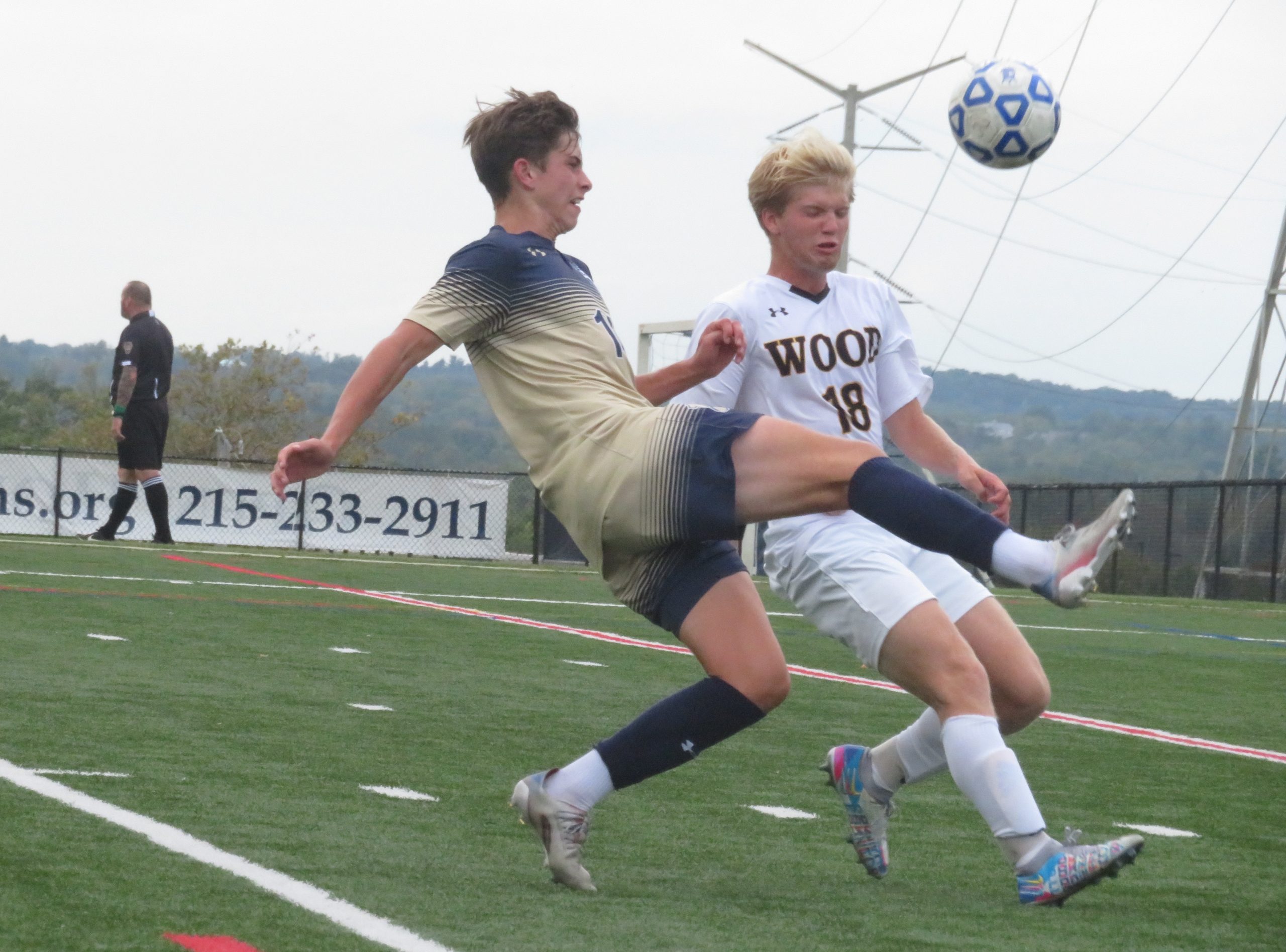 SPRINGFIELD >> Seth Michalak saw the biggest difference between the La Salle boys soccer team’s first 40 minutes Tuesday afternoon and its second as simply the Explorers’ ability to put the ball into the net.

“We had a good first half but things were slow, things weren’t connecting and I think we just finished – I think that’s all it really was,” Michalak said. “I think the first half we got chances and we just didn’t shoot the ball well enough. And I think in the second half we shot it a lot better than we did.”

After a scoreless first half against visiting Archbishop Wood, Michalak helped the Explorers set a new tone as the junior forward notched the opening goal off a feed from Sean Jennings in the fourth minute following intermission.

Michalak went on to add a second to double the advantage while Conor Clair scored a pair late in the Philadelphia Catholic League contest as La Salle pulled away from the Vikings to stay undefeated with a 4-0 victory.

“Trying to get the guys to recognize is cut the touches, especially in the front third and try to make teams pay and fortunately today the guys were on the mark,” Explorers coach Thomas McCaffery said. “I think that was one of those things the last two matches we ran into some really good goalkeeping but we were on the mark there we were just unlucky even though we found a couple wins today you kind of see what happens when the guys were able to find the back of the net a little more consistently.”

After besting both Archbishop Ryan and Roman Catholic by a goal last week, La Salle (6-0-0, 4-0-0 league) entered Tuesday level with both Wood and St. Joseph’s Prep at the top of the PCL standings at points. Michalak ended the deadlock but Wood kept things tight and pushed for an equalizer only for the junior to strike again in the 68th minute and put the contest firmly in the Explorers’ control.

Clair, who was denied a goal earlier in the second half by a defender’s goal line block, finished things with his tallies in both the 77th and 79th minutes.

BOYS #SOCCER: 36:47 @LaSalle_Sports 1, @abwboyssoccer 0. Seth Michalak runs onto a through ball from Sean Jennings & chips it over the keep to put the Explorers on top. pic.twitter.com/majM5YBpPp

“When you look at what Wood presents, they’re so structured, they’re fast, they’re physical, they’re big kids that compete hard, the coaching staff has them ready for every match that they play in and it’s hard to break them down,” McCaffery said. “And I think that one of the things that we talk a lot about here is that in these matches we have to concentrate on getting and making the most of our opportunities not only in front of goal but with minutes we shift a lot of guys in and out of the game.

“We kind of rotate every 12 to 15 minutes to try to keep guys fresh and I’m not sure how many other teams can do that with the type of results that we see.”

Archbishop Wood (4-2-1, 3-1-0), which had a two-game win streak snapped, has another challenging road contest Friday taking on  St. Joe’s Prep 7 p.m. at Temple University. Prep kept pace with La Salle for first in the Catholic League with a 7-0 win over Cardinal O’Hara Tuesday.

The Explorers next play Saturday, visiting Devon Prep for a 2 p.m. matchup.

“Wood’s always a great competition, they’re always in the top half of the PCL which is great to see where we are midseason,” Michalak said. “But regular season matters but it doesn’t matter as much as the postseason. I know we’ll meet them again in the postseason and we got to be ready for them, they’re going to be hungry.”

The breakthrough by Michalak was the result of quality La Salle ball movement in the center of the field. Edward Donovan tapped a pass back to Sean Jennings, with the recent Penn commit slotting a through ball to Michalak as he made his run to get behind the Wood backline. Michalak’s left-footed chip beat the outcoming keeper and flew into the top right corner at 36:47.

“So I just saw Conor Clair check in and then I made a diagonal run and I just saw Jennings getting the ball and I was just screaming my head off for it,” Michalak said. “Just great ball, thankful for him that was a great ball and just chipped it right over the keeper, it was beautiful.”

The Vikings’ best push to tie came midway through the half. A ball made its way to Enzo Petruzelli in the 18-yard box but he could not get it through a defensive crowd in front of the net.

Michalak collected his brace and a 2-0 lead for the Explorers with 12:54 remaining, winning the ball on the right flank, eluding a defender and putting in a shot at the near post.

“After I beat my first man I saw that open space just one-on-one with my defender,” Michalak said. “I saw Eddie Donovan, he kind of checked away and Conor Clair, they both kind of gave me my space to go one-on-one so I took that space and hit the shot and it was a good shot, went it.”

Michalak had a hand in La Salle’s third goal – twisting around a defender then tapping a ball forward to Timmy Meehan making a run through down the middle. Meehan sent a pass left to Clair, who ripped a right-footed shot into the opposite top right corner at 3:07.

“I saw that open space that Timmy had, Timmy played a great ball into me, I made a nice turn and beat my guy,” Michalak said. “And then I saw Timmy making another great run up the field, I just played to him and then let them do the rest of the work.”

Clair netted his second and the Explorers’ fourth by getting enough of the ball to have it bounce into the net with just 1:33 left.