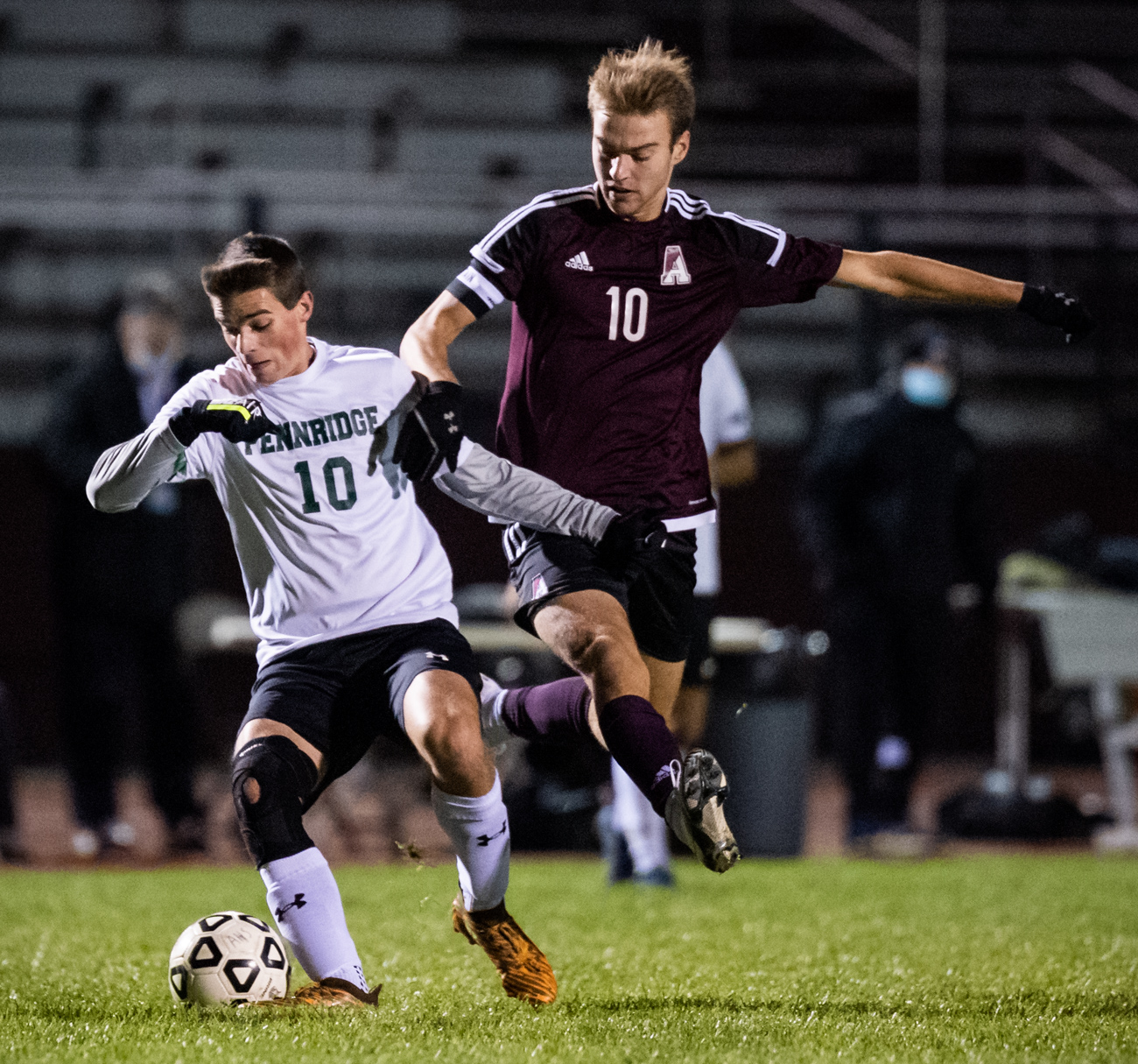 Matching Number 10's battle for the ball as Abington's Gavin O'Neill and Pennridge's Kevin Link meet at midfield during their District 1-4A first round game on Monday, Nov. 2, 2020. (James Beaver/For MediaNews Group)

In many ways, it was a decision already made for Gavin O’Neill.

While the Abington boys soccer midfielder had plenty of suitors at the college level, none of them had what Rowan was offering. Thirty years ago, his father Bill was a national champion at the university, then called Glassboro State and Rowan saw the younger O’Neill as a piece that could help get another one.

“I’ve known Rowan all my life,” O’Neill said. “I grew up in a Rowan family, I’ve been going to games all my life and seeing the championship mementos and the MVP trophy around my house, I’ve always been a Rowan guy.”

The top story on the Rowan men’s soccer team’s page on the university athletics site is a tribute to the 1990 Glassboro State Division III championship team. Kneeling in the front row of a black-and-white photo atop the story is Bill O’Neill, a team captain that year who assisted the NCAA title-winning goal in the national final.

To some, the pressure to live up to that kind of legacy would be a turn-off. Gavin, a co-captain of the Ghosts’ SOL Liberty champion side this fall, only sees it as more motivation.

“I want to try and make my impact and help the program win a national championship, that’s my main goal,” O’Neill said. “It definitely fired me up more; I want to re-create what he did or even do more. It pushed me to want to do those same things and win, for sure.”

O’Neill, who also piqued interested from Holy Family, Jefferson, Elizabethtown, Cabrini and West Chester, said the family atmosphere of the Profs’ program was the major pull. He’s not the only legacy in the program, either as sophomore Jake Logar is the son of Andy Logar, who scored the 1990 title-winning goal off Bill O’Neill’s assist.

Breaking the news to his dad, who is part of the university’s athletics Hall of Fame, was rewarding for both of them.

“He was so excited,” O’Neill said. “He was so excited for me. He didn’t want me to go to Rowan just because he went there, he wanted me to pick the right school and I just felt Rowan was the best choice for me.”

Additionally, current Rowan coach Scott Baker was a defender on the title team and played with Bill O’Neill. Rowan has continued to be a strong program, finishing nationally ranked after reaching the 2019 Sweet Sixteen and has played in three NJAC championships in the past four seasons.

“I think it’s going to go well,” O’Neill said. “The whole program is like family and I think he wants to be there for me not just as a coach but also someone who can help me after the soccer part. I think it will be a good fit.”

Now the head coach of the men’s and women’s programs at Bryn Athyn College, Bill O’Neill helped instill the strong work ethic and mentality of never settling that helped Gavin contribute plenty at Abington over his four years. During his time with the Ghosts, the team won two SOL titles and four district tournaments, plus a District 1 final and state playoff appearance in 2018.

This fall, as a co-captain, O’Neill earned first team All-SOL Liberty honors as an industrious center midfielder, who covered a lot of ground and played a facilitator’s role in the run of play and off set pieces. O’Neill, who also played club with FC Delco, said playing with guys like Sean Touey, Reese Gibbs, Nevin Baer, his fellow co-captain Bryce Lexow and others at Abington under quality coaching helped grow his game.

“It showed me you have to perservere, you can’t give up and you have to keep going,” O’Neill said. “That’s what Coach (Randy) Garber and (assistant) Matt Siroli have shown me, even when you’re down, you have to find a way to keep going. Their belief in me these past couple years will help me as I go on to college.”

O’Neill hasn’t stopped working since the high school season ended either. He’s doing what he can under the current COVID-19 restrictions to get touches on the ball and at the advice of Touey, now at Holy Family, keeping his fitness up and working out at home.

That’s not surprising, as it’s something his dad has always harped on him to do.

“I owe a lot to him for being the way he is and pushing me every day,” O’Neill said. “I understand it now why he wanted me to push myself in everything. Everything this past year, I don’t think it would have happened without him getting on me to keep working hard.”

Rowan, which did not compete this fall due to COVID-19, has just two seniors on its roster. The idea of a young, talented core stood out to O’Neill and his hope is to make an impact as soon as possible.

The Profs haven’t won an NCAA title since that 1990 season, but they’ve got some of the right names in place to try and get another one.

“I love the feel of Rowan,” O’Neill said. “It felt like another home. I knew this was the place I wanted to be and I can’t wait to get started.”