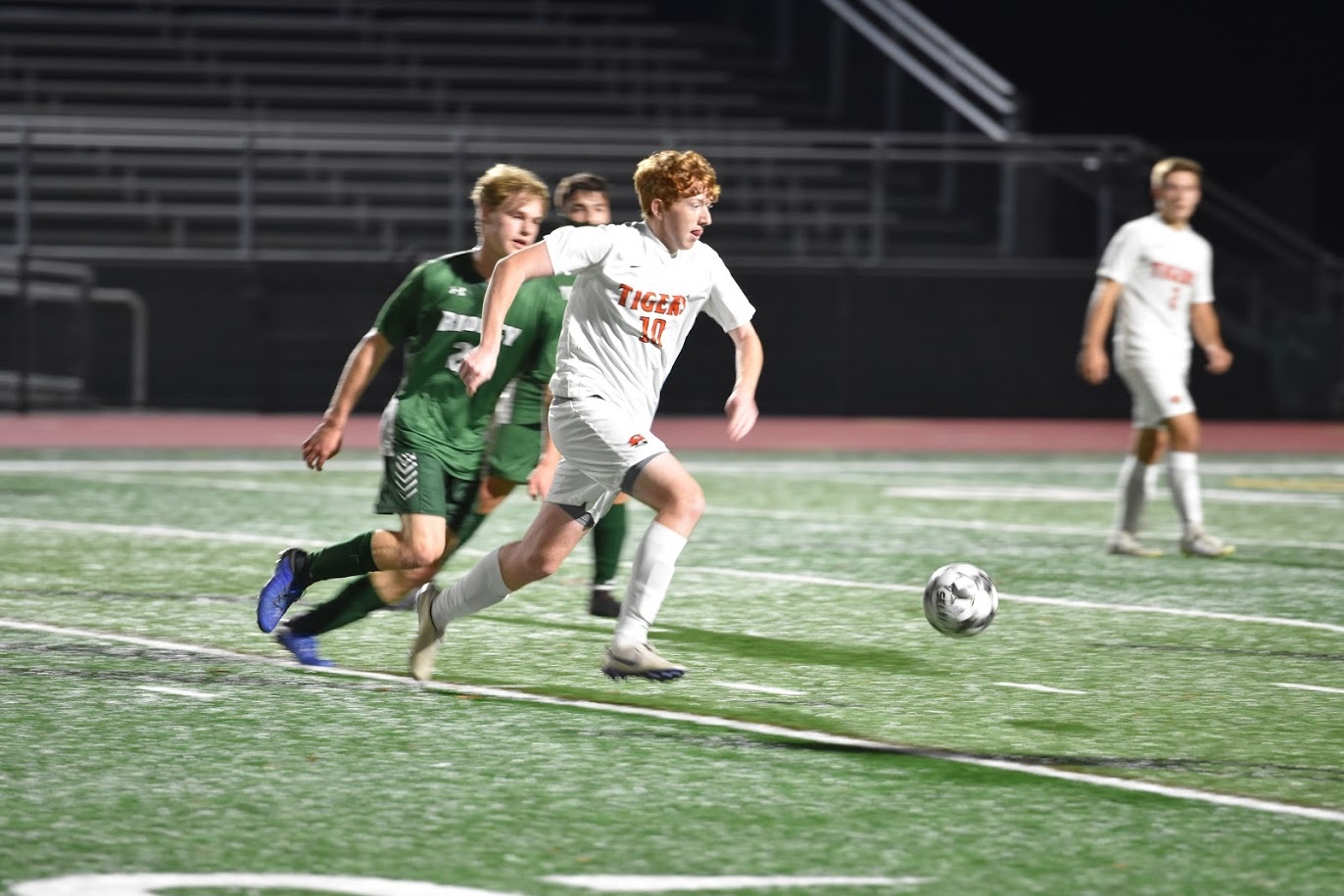 Marple Newtown's Ciaran Corr ruled the midfield for the Tigers and chalked up four goals and five assists this season. (Submitted photo)

The 2020 fall high school season in Delaware County was an unprecedented campaign. In keeping with all the changes that local athletes have endured, we’ve altered the way we handle postseason awards in 2020. Some athletes (and leagues) didn’t have a season in the fall. Others were limited to just a handful of games. Many lacked nonleague games or playoffs.

For more than 80 years, we’ve picked All-Delco teams to recognize the best high school athletes in Delco. But this year, with all the players who couldn’t play, we didn’t believe we could select All-Delco teams with the same rigor, ones that would carry the same weight, as every other year. Despite that, we can’t let the exploits of the fall pass without recognition. So like everyone else in 2020, we’re adapting: Over the next two weeks, we’ll be highlighting the all-league teams picked by coaches in various sports, embellishing them with special features. We hope that, though different, it’ll be an appropriate summation to the season.

When Joe DePaolo took over the Marple Newtown boys soccer program before the 2019 season, he had the long game in mind. A promising junior class would get its chances, for the present and for the future. With more talent bubbling up through the system, he hoped the experience and ability would meld in 2020.

Not much went to plan this year. But within the fraction of a season that the Central League allotted, things played out better than hoped for the Tigers, which led to a pair of first-team All-Central players.

Fidel Inglis led the Marple Newtown offense with six goals and three assists. Central midfielder Ciaran Corr ran the middle of the pitch with four goals and five assists. With those contributions, the Tigers went 7-2, tied with Lower Merion for the third-best record in the league.

“It’s really a testament to these players because they put in the work, came to all these offseason Zoom sessions and before the pandemic, coming to winter sessions when it was freezing cold, working on tactics and what we wanted to do next season,” said DePaolo, who was named the league’s coach of the year. “And really it all came together.”

The team’s objective all season was to earn a home playoff game. They got that as the fourth seed, even if it ended in heartbreak in the quarterfinals, a penalty kick loss to No. 5 Harriton (1-1 after extra time, 7-6 in the shootout). Marple had beaten Harriton, 2-1, in overtime away to garner hosting duties.

That affair stood out to DePaolo among other highlights – the 3-0 win over Garnet Valley, the 3-1 domination of Haverford – as one where Marple applied an emphatic stamp on the season. The coach had seen the work behind the scenes, the way seniors like Corr, Inglis, Ryan Gault and goalie Ryan Straub asserted themselves before the pandemic shutdown to organize offseason workouts. He saw the weekly, hour-long Zoom meetings during the pandemic to talk tactics and conditioning. He saw the adaptation to the three-back system that he installed.

He saw how Henry Gjergo, who scored the game-winning goal against Harriton, went from not playing varsity his junior year while back home with his family in Albania to becoming a focused, vital piece.

Against Harriton, DePaolo laid the challenge at his players’ feet.

“Now it’s time to go show the league what we’re all about,” DePaolo told them. “And the guys really stepped up. Even in the playoff game, I thought we played extremely well.”

DePaulo benefited from seven contributing seniors. He hopes their legacy lays down a marker for where the program can grow. Most importantly, for all of the 2020 milestones to be left in the past, he hopes his players have something worth taking with them.

“When it seemed like the season wasn’t going to happen at all, to be able to be part of games like that – 2020 is a year that everybody wants to forget,” he said. “But I think for a lot of these seniors, having those moments and having those opportunities to play in those big moments, that’ll stay with them forever.”

Radnor was the only other Delco team to place two players on the first team after a 9-0 regular season, though tempered by the upset by Garnet Valley in the playoffs.

Matt Miller was the team’s leading goal scorer, the senior forward providing six goals and two assists, including a pair of goals in a 3-2 win over Lower Merion. Michael Sears anchored the defense at center back. The Radnor captain was named the team MVP, augmenting his defense with two goals and an assist. He’ll continue his studies at Boston College.

Conestoga, which won the league again, supplied the league MVP in Tyson Burling. The senior scored 15 goals and two assists in 14 games, a constant threat from the left wing. ‘Stoga outscored opponents 66-10 in an undefeated campaign. The Pioneers placed one of only two underclassmen on the team in Sebastian Tis. The holding midfielder supplied three goals and two assists, providing physical and technical play in the middle of the pitch.

Despite Conestoga winning the league title, Lower Merion pushed three onto the first team All-Central, a testament to the Aces’ star power.

Shane Brown, the runner-up for MVP, scored seven goals to go with three assists, despite being man-marked and playing through injuries. Able to play multiple positions, he excelled as a winger with his pace and ability to play dangerous crosses into the area, always eager to take on defenders.

Owen Downey was the target man and a prime beneficiary of that service, tucking away six goals and three assists. Ever dangerous on set pieces, Downey did a lot of the dirty work, providing the hold-up play to keep the ball and get the Aces’ midfield and overlapping outside backs engaged.

Goalie Michael O’Gara was the best of the backstops, keeping six shutouts in nine outings before an injury ruled him out of the postseason. The junior is a vocal leader with a knack for clutch saves.

Strath Haven didn’t match the form of back-to-back state title runs, but Andrew Lowman still earned a spot on the first team. A three-year starter and two-year captain, the midfielder was an All-Delco last fall. He picked up three goals and three assists this season, his fourth as a varsity contributor.

Harriton senior captain Josh Millrood led the Rams on both ends of the field with four goals from the center back spot. The Rams’ defense allowed just 12 goals in 13 games. Millrood will attend (though not play at) Tulane University.

Garnet Valley, which made the semifinals, is represented on the first team by striker Matthew Bowes. Though he missed the postseason due to injury, he scored six goals and two assists in nine regular-season games as the engine driving the GV attack.

Duncan Riegler, an All-Delco last year, earned All-Central recognition for a second straight season. The center back covered acres of space at the back for the Fords, who finished sixth. Riegler helped the team hit its stride late, allowing just one goal in its last three games, including a playoff win over Springfield and a loss in PKs to Lower Merion in the quarterfinals.