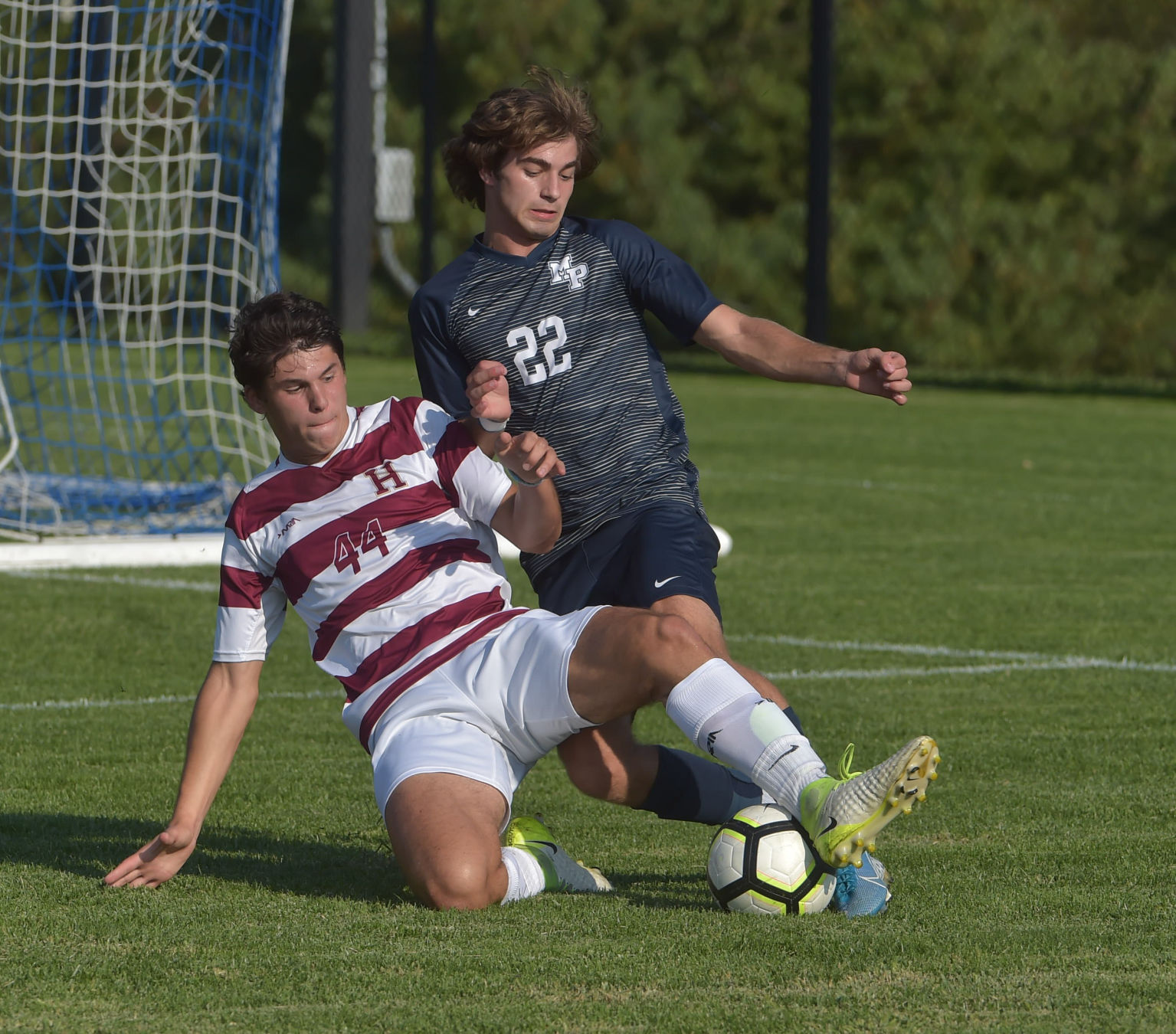 In addition to Player of the Year Trevor Manion of Episcopal Academy, the All-Delco team includes:

Duncan Riegler, Haverford: The junior defender was the anchor to a Fords defense that returned the program to the District 1 Class 4A playoffs for a second straight year. Reigler, an All-Central pick, was the biggest part of that, literally and figuratively, thanks to his aerial prowess. The Fords kept four clean sheets on the season, including a draw with PIAA Class 3A finalist Strath Haven in the regular season. Haverford also upset Conestoga, 3-2, and battled but couldn’t quite break through in a 1-0 loss to Abington in the first round of districts.

Brendan DePillis, Episcopal Academy: The senior center back was a rock for the Churchmen, who struggled to score goals on the way to fourth place in the Inter-Ac. Nonetheless, the first-team All-Inter-Ac pick helped keep EA in games with his work at the back. He scored two goals, including the game-winning penalty kick in the opener against Garnet Valley, and added two assists. The Churchmen kept six clean sheets on the year, including a pair of 1-0 wins over rival Haverford School.

Mitchell Hark, Haverford School: The senior center back was at the heart for a Fords team that allowed just five goals in 10 Inter-Ac games, an admittedly bizarre league campaign in which Haverford never allowed more than one goal in a game but dropped four 1-0 decisions. Nine of their 10 league games included one team keeping a clean sheet, and Haverford School outscored opposition 16-5 in the league but compiled just a 6-4 record. The defensive partnership between Hark and sophomore Andrew Johnson in front of University of Chicago-bound goalie Will Boyes also helped the Fords make the final of the PAISAA tournament. Hark scored three goals as one of the Fords’ top set-piece deliverers. He tallied in an overtime win over Archbishop Curley in August and had a goal and an assist to get past Buckingham, Browne & Nichols.

Jake Lee, Radnor: The Raiders faced wholesale changes at the back this season after making the PIAA Class 4A final last fall, but Lee’s leadership made it a seamless transition. The All-Central selection was the team’s MVP, leading the Raiders to 11 clean sheets in a 12-win season and a home game as the seventh seed in the district tournament. Lee, a converted midfielder who’s played all over the pitch in his high school career, added four goals, including game-winners against Penncrest and Downingtown East.

Haverford’s Aidan Tripler, scoring from the penalty spot as part of a hat trick against Garnet Valley, led the Central League in goals with 15. (Pete Bannan/MediaNews Group)

Ethan Hensinger, Garnet Valley: The senior helped control the middle of the pitch for the Jaguars, becoming one of the most solid two-way midfielders in the Central League. As the Jags’ pivot, he contributed five goals and nine assists for the season. That included an epic five-assist game in a victory over Marple Newtown as Garnet Valley finished 9-7 on the season, just outside of the playoff spots in District 1 Class 4A. Hensinger was an All-Central first team pick.

Andrew Lowman, Strath Haven: The junior was part of a stellar midfield for the Panthers, which guided them to a district title and state final for the second straight year. Lowman, who played significant minutes as a sophomore, stepped up his role this year, tallying six goals and five assists, all from a deeper-lying position than his running mate, Emmet Young. Lowman starred in the state semifinal against Archbishop Wood, setting up both goals off picturesque corner kicks. Lowman also scored the opener in the first-round states win over Susquehannock. He added a goal and an assist in an overtime win over Marple Newtown and scored twice in the regular-season loss to Bishop Shanahan, which the Panthers avenged in the District 1 tournament.

Luke Macaione, Haverford School: The senior set the tone in midfield for the Fords, a four-year starter who stepped into whatever role coach Dan Keefe needed him to. This season, it was as a facilitator: Macaione scored one goal (in a blowout win over Penn Charter) but provided 10 assists on the season, orchestrating a team that had 15 players score at least one goal each. Macaione supplied two helpers in a win over Hill School and set up Asher Laackman’s regular-season winner in overtime against Springside Chestnut Hill. With Macaione pulling the strings, the Fords won 14 games against a daunting schedule and reached the final of the PAISAA tournament. Macaione has committed to Bowdoin University.

Strath Haven’s Andrew Lowman, right, dancing past Penncrest midfielder Ethan Emery in a District 1 Class 3A playoff game, was a big piece in the Panthers’ return to the PIAA Class 3A final. (Pete Bannan/MediaNews Group)

Emmet Young, Strath Haven: The senior midfielder was the beating heart of the Panthers’ run to a second straight District 1 Class 3A title and PIAA runner-up finish. Young led the Panthers’ attack with 10 goals and 12 assists. His penalty kick in extra time decided the District 1 final, a 2-1 victory over Holy Ghost Prep, after he had set up Quinn Vandellos’ opening goal. Young assisted on both goals in the district semifinal win over Bishop Shanahan, a come-from-behind effort also in OT, and his free kick was touched home by Jake Hooper for the Panthers’ only goal in the state final, a 2-1 loss to Lower Dauphin. The All-Central pick excelled on the soccer field while serving as the kicker on Strath Haven’s district-qualifying football team.

Bobby Hydrisko, Sr. F, Radnor: One of the few returning attackers from last year’s state-final run, Hydrisko had a huge responsibility on his shoulders for the Raiders. But the All-Central forward responded splendidly, tallying five goals and nine assists as Radnor tallied a 12-win season and earned a home game in the District 1 tournament. He scored the only goal in a draw with Conestoga, had a goal and two assists in hammering Springfield and two helpers in a win over Downingtown East.

Aidan Tripler, Haverford: The senior forward produced wherever on the field he was placed, resulting in 15 goals, seven assists and the most votes in All-Central balloting among Delco players (third-most overall). He scored 11 of his goals in Central League play, including a hat trick against Garnet Valley and the game-tying goal as the Fords upended perennial power Conestoga, 3-2, in overtime. After leading the Central League in assists last season, Tripler led in goals this year, shifting to a more advanced role. He also scored two goals in a win over Penn Wood, helping the Fords make the District 1 Class 4A playoff field for the second consecutive year.

Asher Laackman, Haverford School: The sophomore helped the Fords turn their season around with his shift up top to a forward position in a 4-4-2 formation. A first-team All-Inter-Ac pick, Laackman scored nine goals, helping a team that played a national schedule pick up 14 wins and advance to the final of the PAISAA tournament. Laackman’s biggest goal was the winner in the PIASAA semifinal, the Fords upending Springside Chestnut Hill, 2-1. He also scored twice in the PAISAA quarterfinal win over Germantown Friends School, twice in the regular season against Germantown Academy, twice in a nonleague tilt with Hill School and notched the overtime game-winner against SCHA in early October.