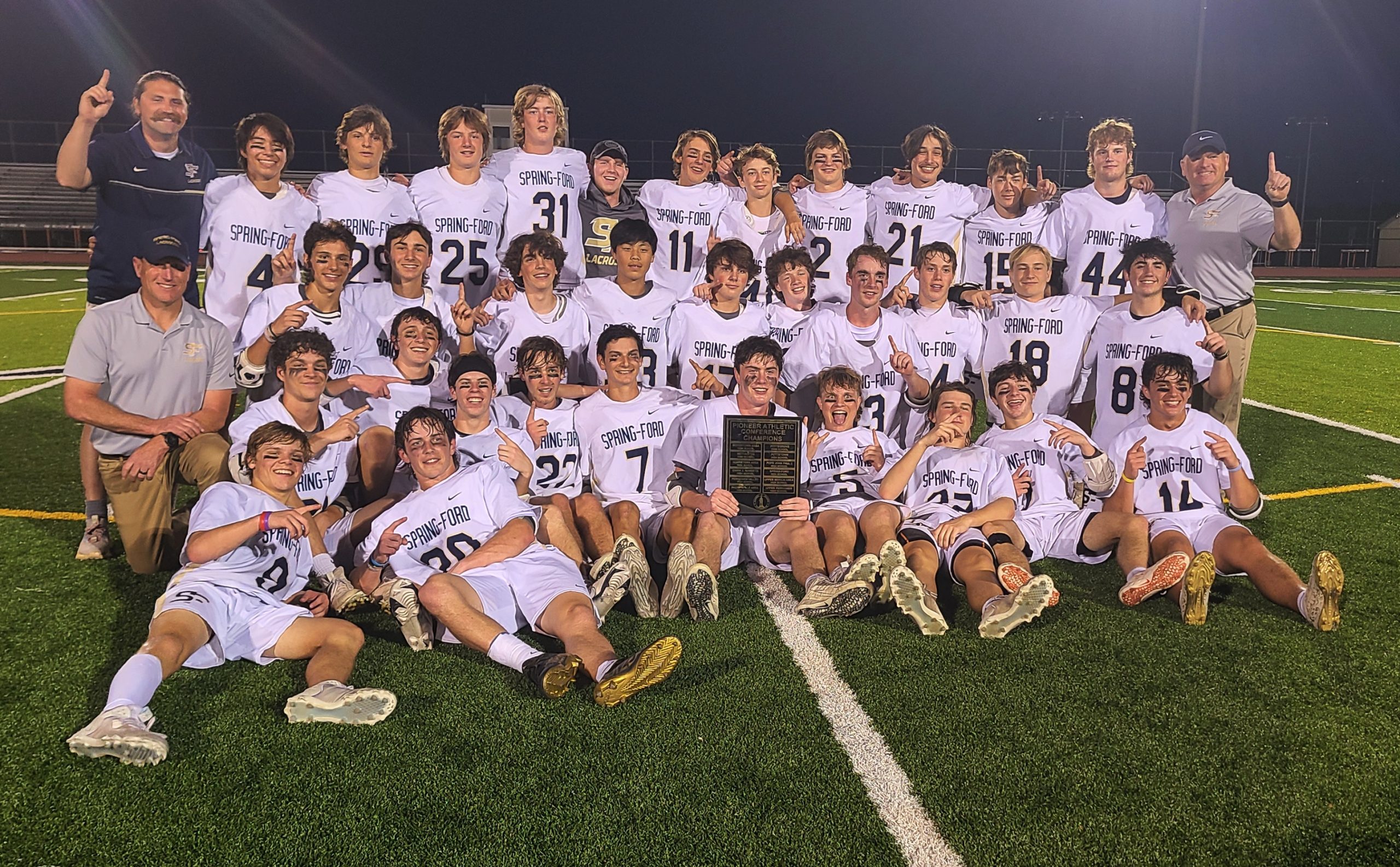 GRATERFORD >> Things are back to normal in PAC boys’ lacrosse – in more ways than one.

After two years of cancellations, the first PAC Final Four since 2019 ended the same as all the others in the past decade – the Rams of Spring-Ford celebrating a league championship.

“We’ve got a group of guys who’ve worked hard for the past two years, taking care of the things that matter,” said victorious coach Kevin Donnelly. “Those things weren’t always under [the program’s] control. But we’re grateful to be here, and we cherish this opportunity.”

This year’s undefeated run through the PAC was accomplished using Spring-Ford’s tried-and-true formula of consistency, depth, and contributions through the roster. But the Rams added a little sizzle this time around.

A defensive unit headed by assistant coach Kevin Czapor and backstopped by goalie Brad Venella put forth their best performance of 2022 on Thursday night, and that’s quite a statement for a unit that came into play allowing only 3.9 goals per league contest.

That average went down Thursday, as Venella’s 14 saves keyed an effort that saw SF hold the Wildcats scoreless for the first 35:55 of the game. Venella stopped the first dozen shots he saw, the highlight a stop on a short breakaway from OJR middie Gabe DellaPenna just before halftime.

“Coach always says, ‘next best play,’ and so I focus on what’s right in front of me,” said Venella. “On that play I saw the ball, came out, made myself big and got a piece of it.”

Owen J. Roberts’ DellaPenna (24) tries to get off a shot as he’s hit by Spring-Ford’s Christian Marchini, left, during the second half of the PAC championship game Thursday. (Austin Hertzog – MediaNews Group)

Meanwhile, the defense and midfield ensured Venella had all the help he needed, causing 21 turnovers and frustrating OJR to the point that just setting up an attack was often a challenge.

“We keep working, improving – honestly, two goals are still too many in our minds,” said captain Parker Smith. “We keep pushing to get better and stay motivated.”

OJR coach Mikey Zadroga admitted the Rams’ relentlessness can get into opponents’ heads.

“Our team is not confident that we can compete with Spring-Ford,” he said. “That’s the biggest thing we need to take away from this game, because until we believe that we can play with [the Rams], nothing will change.”

“But that’s why I call them the standard. They’re disciplined, dominant in one-on-one matchups, and they control the tempo.”

“Our defensive effort was smothering today,” said Donnelly. “We knew what we needed to do, we knew our assignments, and came out and did it. I give Owen J. Roberts credit for playing hard, that’s a strong team who made us earn it the whole way.

“I don’t think of us as an intimidating team, but I do think the legacy of the guys who’ve come before probably have an effect.”

Offensively, the Rams distributed the goal scoring among a half-dozen players, with both Will Bonawitz and Christian Marchini leading the way with two goals and three assists apiece. Will Fish, Lance Terrizzi, Hayden Wedemeyer, and Justin Wixted also tallied for SF.

“We always say, on this team we just love athletes,” said Marchini, who added three caused turnovers to his stat line. “We put a stick in your hand, and you get after it on both sides of the field. If you can run the field, we will find a spot for you, especially in the midfield.”

The result meant the completion of Spring-Ford’s first, and perhaps primary, goal for the 2022 season – regaining the PAC title they lost a year ago. Perkiomen Valley topped the Rams, 8-7, in the first game of the 2021 season and with no Final Four at the end of the campaign, Spring-Ford was left to watch as the Vikings swept their way to the first PAC championship in program history.

“It’s a sweet feeling,” said senior captain and midfielder Carson Bogdan. “For us, this is getting back to tradition.

“We wanted this; we were hungry. We knew we’d get everybody’s best game, so we came out ready for a battle.”

Spring-Ford’s Will Bonawitz, left, and Christian Marchini celebrate after Bonawitz’s goal in the second half of the PAC championship Thursday at Perkiomen Valley. (Austin Hertzog – MediaNews Group)

Meanwhile, the Wildcats did break through late with a pair of goals from Will Jaeger, the latter of which was the 100th point of his high school career. Added to teammate Josh Devine’s 100th point of 2022 from Tuesday night, the two OJR seniors have a couple of impressive accomplishments, especially for players who saw a full year taken from their careers.

“It’s something they should both be very proud of,” said Zadroga. “Both guys work their butts off, so they deserve that accomplishment.”

Owen J. Roberts (14-6, 8-3 PAC) will continue their strongest season in recent history in the District 1 playoffs. The Wildcats, ranked No. 10 in District 1-3A at the start of Thursday, will host a game in Tuesday’s first round. The full field and matchups will be announced Saturday.

“It’s a new season, and it’s single elimination,” said Zadroga. “So nothing from the past matters. Tonight doesn’t matter. You show up, and you either win or go home.”

Spring-Ford (14-4, 10-0 PAC) entered play on Thursday as the No. 7 seed in those same rankings, and figures to be secure in the top eight, which would mean a first-round bye and a full week’s rest before starting districts at Coach McNelly Stadium next Thursday.

“We’ve seen very strong competition this year, and we know we can play with those teams,” concluded Donnelly. “We know our defense is strong, and our offense has seen a lot of zone, which increases our comfort level.

“We know how to respond in every situation.”

After two years filled with unpredictability, perhaps the strongest sign of a ‘return to normalcy’ is a Spring-Ford PAC lacrosse championship.