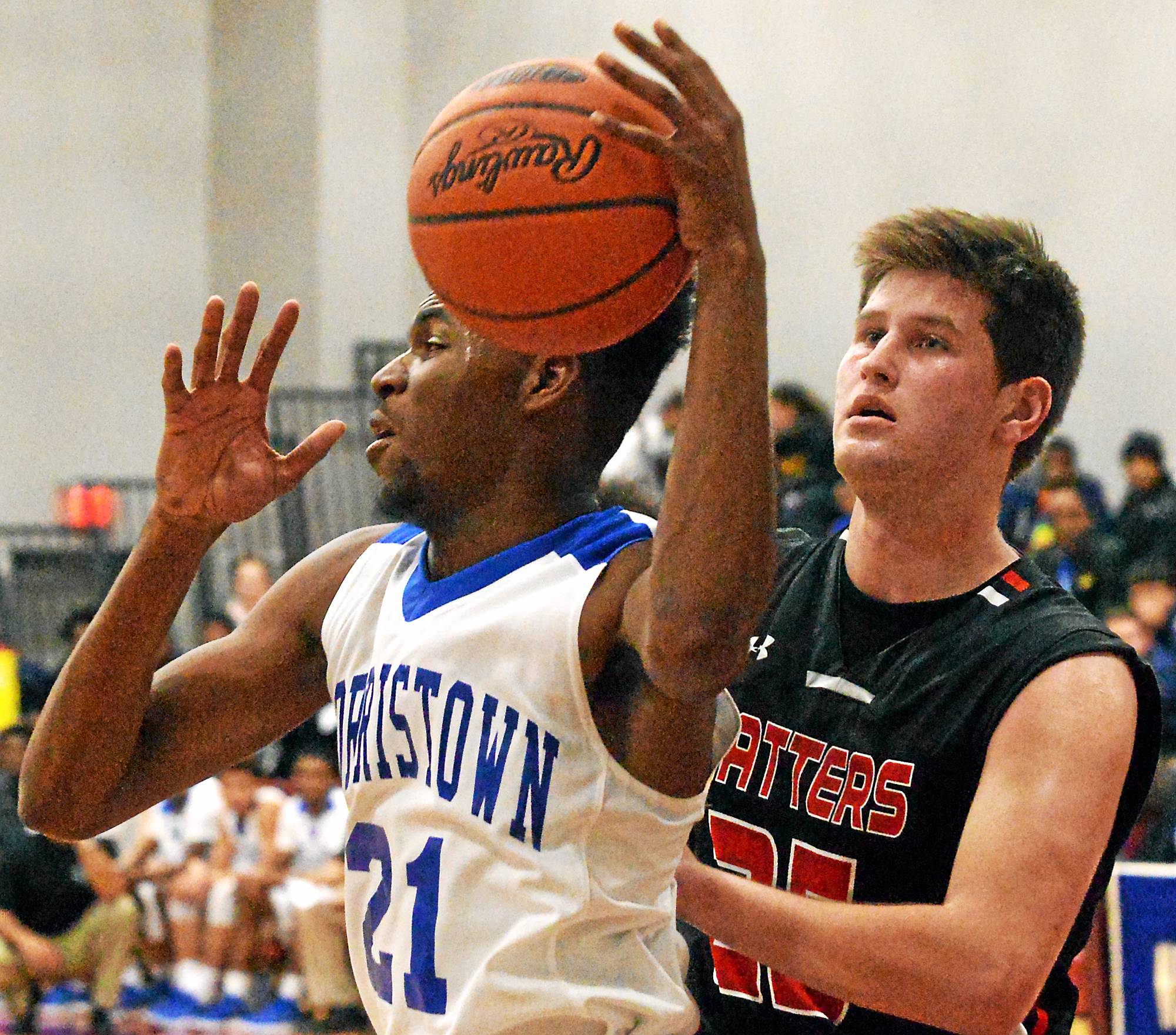 Norristown's Darius Hopewell gets the better of Hatboro-Horsham's Kyle Hogan on a rebound during their game on Thursday, Dec. 28, 2017. (Bob Raines/Digital First Media)

WHITPAIN >> Vernon Tubbs got hot at the right time.

The Norristown junior guard ended the third quarter with a 3-pointer and started the fourth with another Thursday night. Tubbs added another jumper and a tough finish through a foul, scoring 10 points in roughly 150 seconds to give his Eagles just the spark they needed.

Spurred on by Tubbs and tenacious defending, Norriston edged Hatboro-Horsham 48-44 in the nightcap of the first round of the Norristown Triangle Club Holiday Tournament at Montgomery County Community College.

“We haven’t faced a team that played a solid zone against us the whole game all year and our guys did a good job adjusting to that,” Norristown coach Dana “Binky” Johnson said. “It was really a defensive battle throughout.”

The first quarter looked like it was going to be a high-scoring game with both teams going up and down the floor and ending the frame in a 15-15 tie. It did not stay that way, with both teams figuring some things out defensively and settling into a more methodical game.

Norristown used its defense to close the first half strong, taking a 24-19 lead into the break after holding the Hatters to just four points in the second quarter. A lot of credit for that went to the Eagles’ forwards in Darius Hopewell and Tyler Tate, who tightened up after allowing eight first quarter points to Hatboro-Horsham center Jake Schalki.

“A couple guys took it personal and we talked to them at halftime about it, Darius Hopewell and Tyler Tate took it personal said they’d do a better job in the second half and made some adjustments on their own,” Johnson said. “They were communicating and working together, the stuff they weren’t doing. He’s a load to handle one-on-one so we had to bring some help side help over and that was a good adjustment we were able to make.”

The Hatters had their own guy feeling it in the third quarter. Khalid Johnson took and made three 3-point shots in the frame and assisted another basket as the Hatters erased the halftime deficit and the guard’s final trey built a lead of their own at 32-28 with 2:54 left in the period.

For a Hatboro-Horsham team replacing most of its scoring from last year, Johnson’s 16-point output was a good sign for the team. With most of the players in the rotation taking on expanded roles or getting their first real varsity shifts, the Hatters are still learning how to win and what they need to do to compete in all areas of the game.

“We scored enough points tonight, it came down to our defense and we got killed on the glass,” Hatters coach Ed Enoch said. “In the third period alone, they had eight offensive rebounds which, you can’t let that happen.”

Tate had several of those offensive boards, including one he turned into a put-back to cut the lead to 32-30. After the Hatters made a foul shot, Tubbs buried a trey with 7.3 seconds left and once Chris Edwards’ long shot was ruled after the buzzer, the 5-foot-7 Tubbs kept going.

“He snuck up on us real fast and hurt us that two-minute stretch there,” Enoch said. “It turned the game around. We got lazy in our zone, after he makes one, you have to get out and mark him and we let him get two more and it was too late then.”

He broke the 33-33 tie to start the final frame with another 3-pointer and after Marcus Sanford and Johnson traded hoops, Tubbs hit a leaner a step or two inside the line and bullied his way to the rim, powering the ball in through a lot of contact for a 42-35 edge.

Johnson wasn’t surprised Tubbs took the challenge of leading his team and he was equally pleased the rest of the Eagles recognized it and got Tubbs the ball. The first-year coach, a former Norristown standout himself, has been impressed with the way his players have been able to slow the game down and play within themselves.

“They did a great job of finding him and locating the hot hand,” Johnson said. “Sometimes it’s hard for a young team to realize who has that hot hand, but it’s a compliment to those guys. They’re really unselfish and they want to play together. They fed the hot hand and boy did he get hot for that one spurt and that was the difference.”

Johnson said the Eagles’ defense has been its calling card all year and again, it was players taking getting scored on personally that helped out down the stretch. Tyler Lyons took the challenge of guarding Johnson late and limited the looks the Hatters guard got, Sanford had a big block and Tubbs chipped in by chasing the ball around relentlessly.

Following a couple of one-point losses and without leading scorer Mikeel Allen, out with an injury, Thursday was a good win for a program that needed it. Norristown will have a chance to keep it going on Friday when it faces Bishop McDevitt for the Triangle Club tournament title at 8 p.m. back at Montco.

“Certain guys, I’m finding out, really take challenges personal,” Johnson said. “Tyler Lyons takes challenges personal as does Vernon Tubbs. Those are the type of guys you want to have. We’re starting anew, myself and the players, we’re not setting huge goals, we’re keeping it game by game and growing. This is a big step we took tonight.”