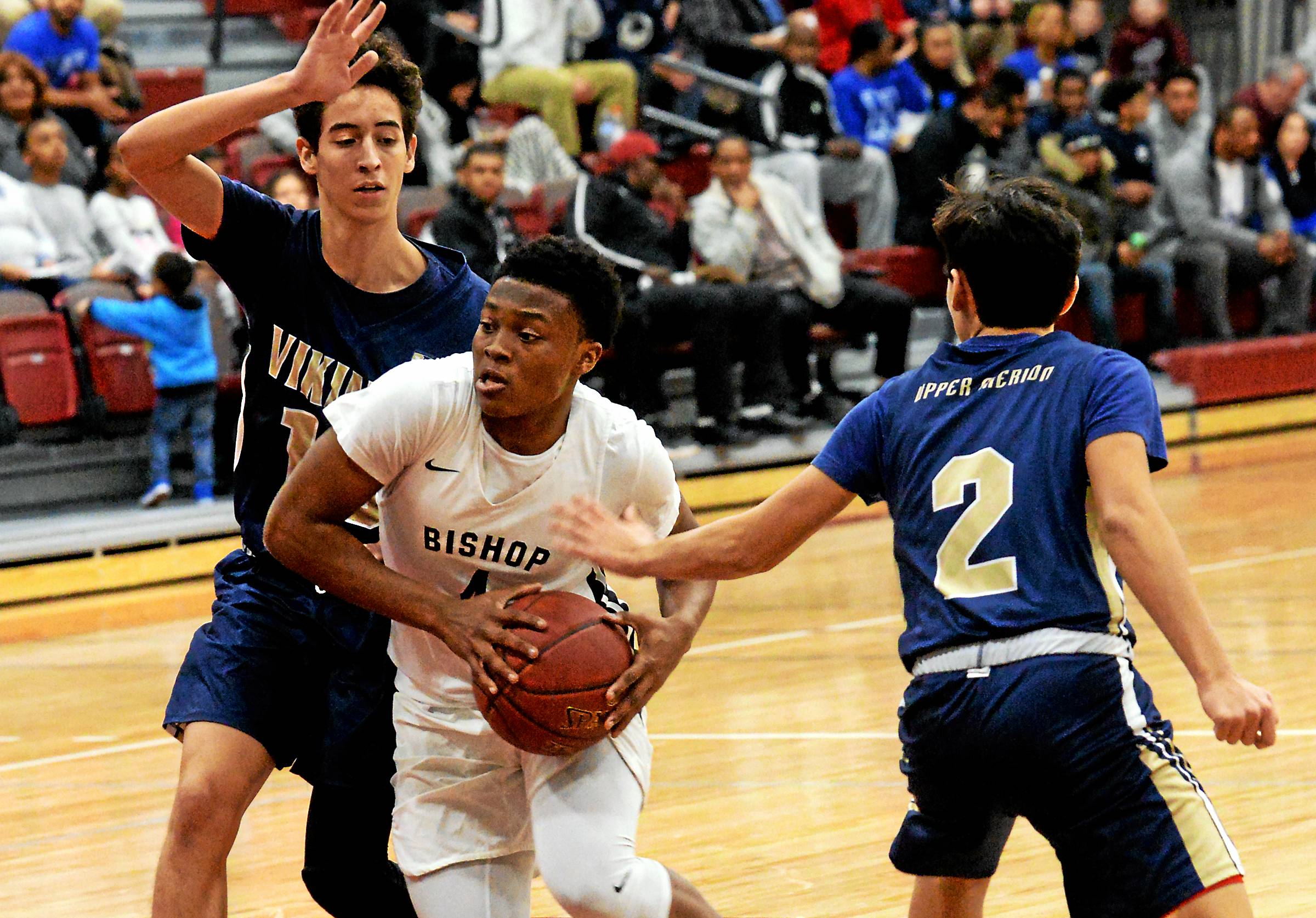 WHITPAIN >> As Upper Merion boys basketball coach Jason Quenzer was getting his gear together Thursday night, his video camera came out of his bag.

The Vikings coach thought it was fitting, because while the result wasn’t in his team’s favor, it was the kind of film that could prove very valuable to a youthful team. Not much went right for Upper Merion on either end of the floor Wednesday, but much of that was due to Bishop McDevitt.

McDevitt, one of the early surprise teams this season, continued its undefeated start with a 65-36 win over Uppper Merion in the first round of the Norristown Triangle Club holiday tournament held at Montgomery County Community College.

“My camera dropped from my bookbag and I started thinking about putting it on film and how some of the best stuff you can learn comes from film like this,” Quenzer said. “Even being aware on the offensive side, you can look at how these four players move when we do this and taking it from on the court to off the court and seeing yourself through different lenses.” The Royal Lancers were aggressive from the start and even after missing their first three shots, got the game’s first score when DaQuane Williams turned a steal into a layup. Upper Merion got within 4-2 early, but McDevitt just took off after that, using a 9-0 run to build a 13-4 lead and getting a 3-pointer from Robert Smith Jr for a 16-4 lead after one.

McDevitt’s success offensively was a direct result of the Lancers’ guards driving into the lane and finding an open teammate, either for a perimeter shot or a forward alone under the rim. With Upper Merion have to collapse and help defensively on the drivers, there were plenty of options for the ball handler to go to.

“I think they’re getting better at it,” Lancers first-year coach William Chavis said. “We work at it every day. I continue to preach what I was taught from Coach (Bob) Knight, mental is to physical as four is to one. That means mental toughness is to physical toughness as the ratio four to one and we try to focus on that every day in practice and try to get better.”

Chavis played for Knight at Texas Tech and went on to a pro career overseas before getting into coaching. While his team is now 7-0, he believes McDevitt is far from its ceiling and is remaining critical and demanding of his team.

Smith Jr paced McDevitt offensively, hitting all six of his shots in the game for 15 points and assisting two baskets, including a terrific no-look feed to Williams in the first quarter. Ahmir Harris had four assists, showing good quickness to get into the lane and good vision to pick out the men left open by Upper Merion’s help. The Lancers also showed their depth, playing 13 guys in the first half, but the subs weren’t able to keep up the rapid offense to start the second quarter. It didn’t matter much, as the defense continued to fluster the Vikings and once some of the starting five trickled back into the lineup, the Lancers took off again.

“I expect whoever is on the floor to give energy and we preach that, you have come into the game and have enthusiasm,” Chavis said. “It’s the expectation we have now at this point and as the season goes one, we’ll continue to try and improve that as well.”

Smith Jr scored the middle five points of a 9-0 run midway through the second quarter that put McDevitt up 25-6 with 2:11 left in the first half. Bishop McDevitt’s first-half lead ballooned as large as 31-9 on Jamil Mangino’s hoop with 41.7 left in the second quarter and the Lancers settled for a 31-11 edge at the half.

Upper Merion made the District 1-5A final last year, but graduated 12 seniors from that team so this year’s group is both young and not used to playing at the varsity level. Quenzer felt his team, which is now 1-7, showed a lot of growth early but in the past few games, haven’t advanced as much.

“For as physical as they were, they’d also get two or three rebounds in a row and that just crushes any kind of momentum you might get,” Quenzer said. “It’s been the same thing, we’re careless the ball sometimes and they seem a little nervous, instead of accepting the pressure and being confident in themselves, which they should be. It’s growing pains.” McDevitt continued to roll offensively in the second half, scoring 20 points in the third quarter and with all reserves on the floor in the fourth, added 14 more points for the final margin. Chavis said it was hard to pick out any standout players, but did feel everyone he put in the game did what was asked of them.

Upper Merion plays Hatboro-Horsham in the tournament consolation game at 6:30 p.m. Friday while McDevitt faces Norristown in the final at 8 p.m. back at MontCo.

It’s the midst of a grind for the Vikings, but Quenzer knows each game is another chance for his players to learn and grow.

“We had four games last week and four when we come back from break,” Quenzer said. “It’s right back in the grind. I think we’ve played well in our league so far and we get right back into that after break. It’s just about trying to grow up in as many aspects of the game as we can.”