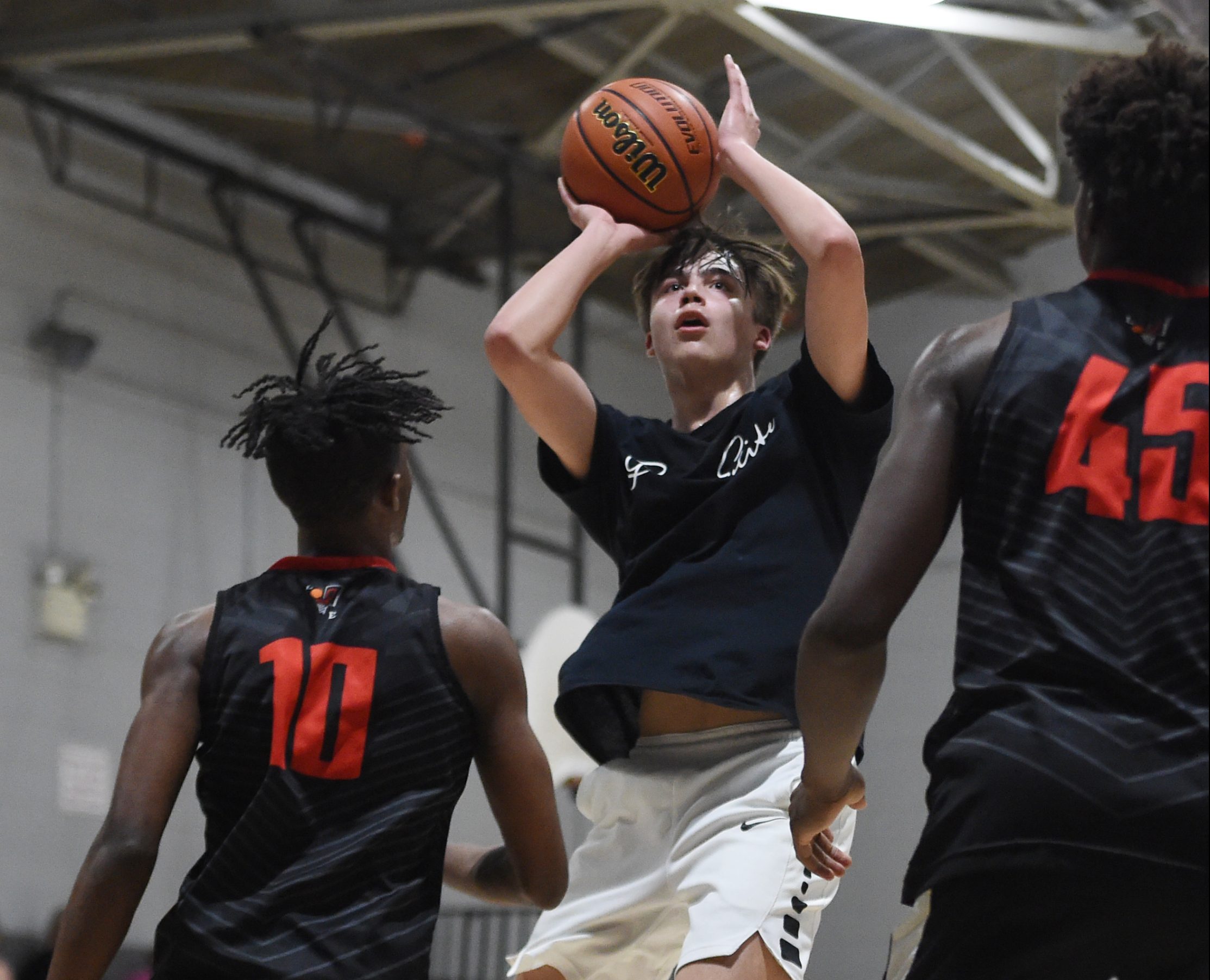 CONSHOHOCKEN >> The Donofrio Classic attracts some of the top high school talent from the Philadelphia area to a small gym in Conshohocken every spring — sometimes even extending that talent pool to the Central part of the state and Mid-Atlantic Region.

Amid the squads stacked with Division I talent and all-league players, a group of Pioneer Athletic Conference standouts playing for Gibbs Elite found a way to win its first three games and reach Monday night’s semifinal at the Fellowship House.

An 83-61 loss to Team Hardnett ended the underdog run end on the second-to-last night of the tournament, but not before the Gibbs Elite players, coached by Boyertown assistant boys basketball coach Ross Romanello, proved they can play with anybody.

“It was honestly awesome,” Spring-Ford junior Caleb Little said of the tournament run. “There’s all these guys from the PCL (Philadelphia Catholic League) and stuff like that out here. They get to come out here with their fancy stuff and five guys from the PAC come out and beat them. It’s pretty great.”

“It was showing that the suburbs can really ball too and run with Philly ball,” Upper Merion junior Madison Tatom said.

Bolyn (four threes) and Anozie both had 18 and Kapp 17 in Monday’s game. Bolyn’s sharpshooting kept thing from getting out of hand early, but Team Hardnett used a 28-point night from Academy of the New Church senior Anthony McCall to pull away from Gibbs Elite.

“It was a bunch of fun,” Ward said. “We all knew each other a little bit playing against each other all season and it was fun to get together and play against these kids.”

“We all played well together,” he added. “We played the game the right way and we just didn’t black down. It was a tough game tonight, but you can’t look over what we did.”

The Donofrio is an interesting mix of rosters with some groups having continuity from their AAU or high school teams and others more made up of randomly assembled talent.

Romanello, who coaches for the team’ sponsor Gibbs Elite AAU, and Dan Hoff, the head boys basketball coach at Oxford High School and president of Eastern PA Elite’s AAU program put together the Gibbs Elite squad with a little bit of both.

The group gelled quickly despite limited time sharing the floor together on the same team.

“I think they know each others’ games pretty well because a lot of them are watching film on the other person during the year,” Romanello said. “I think just the understanding and the respect they have for each other battling against each other across PAC play really allowed them to build the quick chemistry.”

“The chemistry was great,” Bolyn said. “No one was really selfish at all. It was always that one more pass.”

Kapp’s older brother Jerry played in the tournament twice. Younger brother caught some eyes in his first appearance, averaging nearly 20 per game in four Donofrio contests after putting up 13.1 points per game in his junior campaign at Boyertown this season.

In its opener, Gibbs Elite defeated Just Clean It in overtime March 28 after Kapp (20 points) tied the game at the end of regulation and hit the game-winner with 20 seconds left in overtime.

He had another big night in an 83-80 second-round win April 6 over Danny Rumph, scoring 29 points to knock off a squad with standouts from the Philadelphia Public League and top prep programs from the area.

Gibbs Elite punched its semifinal ticket last Wednesday when Bolyn exploded for 28 points to take down a Primetime team featuring the stars of Radnor’s District 1-5A runner-up and Devon Prep’s PIAA Class 3A championship squad.

Team Hardnett’s size and athleticism prevented the underdog group from another upset on Monday.

“I think one of the things that was special about our group is they weren’t able to give up the fight at any point,” Romanello said. “They knew they were undersized going in. They knew we might not have the most talented group, but what we can do is fight from start to finish and I think they did an awesome job of that, rallying together.”

Tatom said he had attended the tournament before but many other members of the Gibbs Elite squad were unaware what was in store before walking into the little gym with a lot of basketball history.

Pictures of the Donofrio’s alumni were featured outside the gym entrance — most notably the late Kobe Bryant — highlighting some of the recognizable athletes who participated in the tournament over its 60 years of existence.

“I didn’t know what it was until Ross told me about it, but it was great seeing the history,” Little said. “Kobe’s been here. … They had a wall with the pictures and stuff and there’s a lot of great names on there.”

“It put the whole thing in perspective to win three games here, and they were hard-fought games against some pretty good teams.”

Kressley was the lone senior playing for Gibbs Elite and after deciding to forego playing college hoops, the Donofrio marked his final moments of high-level basketball.

He didn’t know anything about the tournament before his team’s first game, but going out playing against some of the best players he’s ever faced was a hoops memory that won’t soon be forgotten.

“It was a great fun time,” Kressley said. “We got a few wins. It was just a fun experience. It feels good to play at a high level. That was probably one of the best teams I’ve ever faced.”

Outside of Kressley and Anozie, the rest of the Gibbs Elite group are juniors who will likely have the chance to come back and play next spring after battling against each other in the PAC.

“It was definitely an awesome experience, and I’m excited for next year,” Bolyn said.