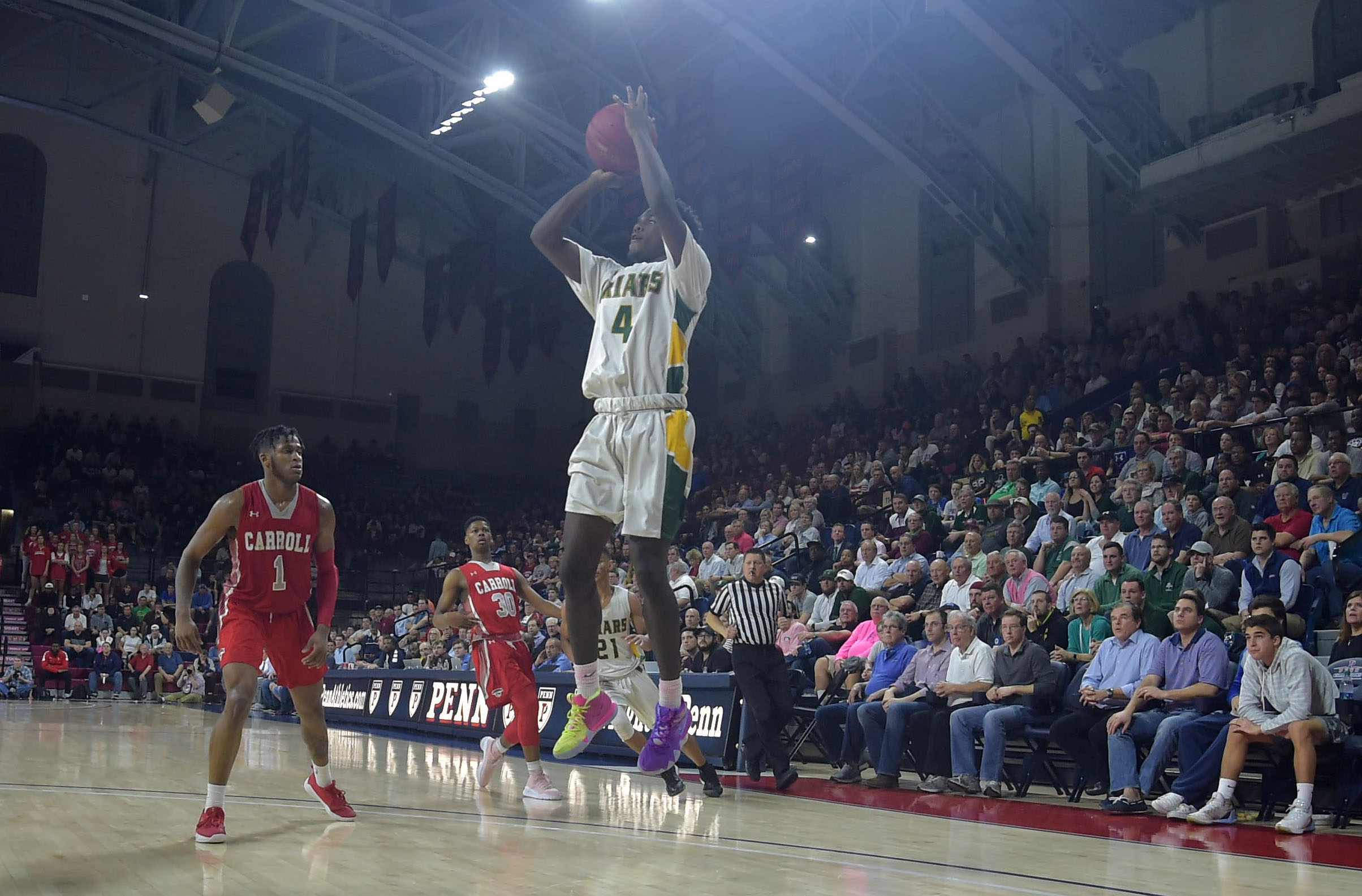 PHILADELPHIA — The looks on the faces of Isaiah Wong and his Bonner & Prendergast teammates were unfazed but aware.

Still fresh in their minds was the loss to Roman Catholic in the closing seconds of the Philadelphia Catholic League championship game last season. With a core group back aside from Ajiri Johnson (Rider), the Friars had all the pieces in place for another run at a league title.

By the end of the night Friday, the focused looks turned to disappointed glares.

Isaiah Wong had 23 points, seven rebounds and three steals and Donovan Rodriguez chipped in a career-high 19, but it was not enough as Neumann-Goretti’s swarming zone defense limited the Friars offensive attack in the second half on its way to a 73-62 victory in the Catholic League quarterfinals.

Wong scored 14 of the Friars’ 28 points in the opening half, including a basket off an inbounds play to give his team a 28-27 advantage with under 20 seconds remaining in the second quarter. Ja’Cor Smith (17 points) dropped in one of his three 3-pointers to end the half, and the Saints led by two going into the break.

The loss was a bittersweet ending for Wong’s two-year stint in the PCL, which encompassed back-to-back league MVP awards and a scoring mentality that helped him eclipse the 1,000-point mark in two seasons. He will always feel there was unfinished business.

“Ever since last year, we put a mark on this and we didn’t get it done this year,” Wong said. “I just felt bad for myself and this family. We all expected to win a championship. We had it on our side but we didn’t finish out to get to the finals.”

Neumann-Goretti (17-6) switched to a 2-3 zone defense early in the third quarter when junior Hakim Byrd (14 points) picked up his third foul. After Wong hit a pair of free throws to cut the Friars’ deficit to 37-34, Smith converted an and-one off a gorgeous pass from Byrd. On the ensuing possession, Byrd sped past the Bonner & Prendergast (17-5) defense for the finish. Finally, Smith turned the corner and scored past Rodriguez to push the lead to 10 with 3:21 left in the third.

Malik Edwards with a big triple and @friarshoops trails 49-44 early in the 4Q pic.twitter.com/7L9jBCY18U

The zone stifled the Friars, who only hit three triples in the game, and Neumann-Goretti coach Carl Arrigale was pleased with how his unit slowed the opposition.

“That wasn’t the plan to play it as much in the second half as we did,” Arrigale said. “We did it to kind of protect (Hakim) a little bit and we felt it was a good thing for us. As we started to build the lead, some of their guys became a little tentative as far as shooting.”

Malik Edwards chipped in 11 points for the Friars, but only three came after halftime. Eight of Rodriguez’s 19 came with the game out of reach as the Saints nailed 11 free throws to close out the game. Wong and Rodriguez were the only players able to penetrate the zone but the kick-outs for perimeter shots were closed off by the Saints. Additionally, Neumann-Goretti limited Bonner & Prendergast’s 6-8 senior forward Tariq Ingraham to two points.

First-year coach Kevin Funston knows how hard this team worked to get back to this position, and not leading the Friars back to the Palestra is something he takes personally.

“We were chasing it hard this year and we came up short,” said Funston, an assistant to Jack Concannon on last year’s staff. “It’s a shame and I take this one on my back. I probably could’ve done a better job coaching but they played hard and together.”

End 1Q: @friarshoops 14, @SaintsofNG 12. Donovan Rodriguez gets the tough finish to fall here for the Friars. Isaiah Wong had eight points in that quarter alone.

Chris Ings (@RiderMBB) has four points and surpassed 1,000 for his career in the 1Q for the Saints pic.twitter.com/bpTTOcFSyM

While Bonner & Prendergast still has the District 12 title and state tournament up next, the failure to claim a PCL crown is one that will remain with Funston, Wong and the rest of the Friars. You can see it in their faces.