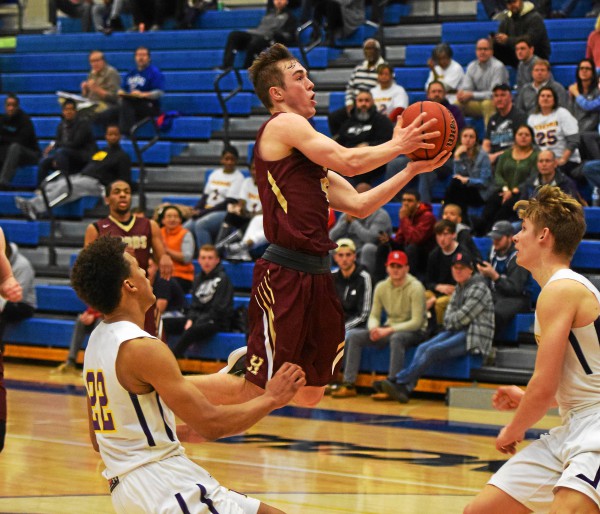 ASTON >> Haverford School head coach Bernie Rodgers didn’t need to spend too much time in the film room to know what he was up against on Friday night at Neumann University.

Facing Perkiomen School for the second time this winter, the Fords weren’t about to have their ‘butts kicked’ again.

Haverford School was dominant all night on the way to a 62-42 win over the Panthers during in the semifinal round of the Pennsylvania Independent Schools Athletic Association (PAISAA) playoffs. Haverford School’s Kharon Randolph drives hard to the rim as Perkiomen School’s Tautyvdas Kupstas gets a knee in the stomach during the PAISAA semifinals Friday at Neumann University. (Austin Hertzog – Digital First Media)

“They kicked our butts earlier in the year,” Rodgers put it bluntly Friday night, referencing his team’s 78-66 loss back in December. “They beat us up inside and were kicking it out to their shooters when we faced them earlier in the year. They got the better of us, for sure.”

Things this time around, though, went much different for the Fords.

“Our guys tonight had a great defensive effort,” he said. “We did a great job of getting out to their (Perk’s) shooters and challenging every shot they took.” With the win, No. 3-seeded Haverford School (21-6) will return back to Neumann on Saturday to face No. 4 Hill School, a 51-47 winner over top-seeded Westtown School. It will be the program’s first ever trip to the state title game.

Perk School, the No. 2 seed, saw its season come to a finish at 22-6 overall, the Panthers making their deepest run into the state postseason in school history. “We had a good week of practice, we knew our game plan and we came out and executed it and tried to trust each other,” said Ray. “I missed my first two and I was trying to get going but I got an easy one on a putback and started pushing in transition because I knew they weren’t going to be able to keep up with me.”

The Fords trailed only once on the night, Perk scoring consecutive buckets in the opening minutes to take a 4-2 lead. It was the only time all game that the Panthers put together any semblance of an offensive run.

From there, it was all Haverford School. The Fords out-scored Perk in each quarter, most notably a 16-point second quarter that ended on a four-minute 9-2 advantage to take a 33-19 lead into the half.

“I think having a lead like that changes the dynamic of the game,” said Rodgers. “Our guys did a good job of talking and helping each other around the basket.”

With 6-5, 260-pound junior Asim Richards at the forefront of it, the Fords’ bigs challenged just about every drive the Panthers brought into the paint. Richards cycled time with Ray and senior Bobby Stratts under the basket.

“They play a lot of 2-3 matchup zone,” said Perk head coach Thomas Baudinet. “We were well prepared for it, we practiced for it, we saw it on film. I don’t know what it was, to be honest. Haverford School’s Christian Ray (24) pulls down a rebound in front of Perkiomen School’s Nick Guadarrama during the first half of their PAISAA semifinal Friday at Neumann University. (Austin Hertzog – Digital First Media)

“We’re kind of a flow-based team, but they didn’t let us get into any rhythm. We were really stagnant, the ball was slow-moving, guys weren’t playing quick. And we were forcing uncharacteristically bad shots.”

Although the season comes to a finish earlier than they’d hoped, Baudinet believes this season was the start of something special coming to Red Hill for the foreseeable future even though the team will graduate eight seniors.

“Like I just told them in the locker room, obviously it’s disappointing to end the season that way,” he said. “But it’s a testament to them that it is such a disappointment to lose in the semifinals of a state tournament. Two years ago that was an afterthought for Perkiomen.

“What the seniors have done in two years, they’ve really taken this program in the right direction. They can look back proudly hopefully when they come back in a few years. Maybe we are hanging our first banner then.”