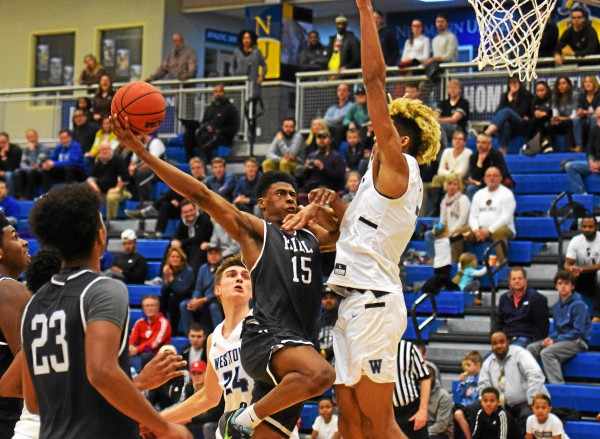 ASTON >> DaQuan Morris found himself on an island the first 24 minutes Friday night.

And no, not the type of island that calls for sunglasses and a beach towel.

Tabbed with guarding Westtown School’s shifty ball-handler Jalen Gaffney during the semifinal round of the Pennsylvania Independent Schools Athletic Association (PAISAA) playoffs, Morris spent the first three quarters taking his lumps before he had the final say.

Morris came up with a pair of monumental baskets in the final minute, including the game-winning steal at midcourt that he took the distance as the Hill School beat Westtown, 51-47 at Neumann University. “It took all game for me to figure out all of his combos, what he was doing with the ball,” said Morris, a senior guard with the Blues. “He’s a hell of a player and he had me beat a couple times tonight. When it finally came down to it, I made the right read and was able to get the steal.”

With the win, No. 4-seeded Hill School (18-7 overall) will return to Neumann on Saturday to face No. 3 Haverford School, a 62-42 winner over Perkiomen School. Two-time defending champ and top-seed Westtown (23-10), meanwhile, will watch the title game from home for the first time since 2013. Soaking in the win and his team making its first trip to the PAISAA finals since winning it in 2014, Morris credited his team’s ‘mental toughness.’ That was the same team that at one point had lost three straight games last month before bouncing back with four straight wins.

“We’ve been preaching our mental toughness all year,” said Morris. “That’s something that we’ve been keying in on. We’ve had lapses throughout the season playing different teams. But when it comes down to it we knew we had to get the job done.

“Today was all mental toughness. We’ve been waiting to play these guys all year.” Ask and you shall receive.

Westtown was playing without its standout senior and Duke University commit, Cam Reddish, who was sidelined with flu-like symptoms. In his absence, Gaffney scored a game-high 25 points including three 3-pointers. Sophomore Noah Collier had six points while senior forward and Indiana University commit Jakob Forrester was a presence in the paint defensively and scored four points.

“We made some mistakes with the basketball that were surprising,” said Westtown head coach Seth Berger. “We’ve had a season with a number of ups and downs. But our thing has always been to stick together no matter what. That’s true to form. Everyone will stay together even after this loss.” Westtown’s Jakob Forrester blocks the shot of Hill School’s Chase Audige during the PAISAA semifinals Friday at Neumann University. Forrester was called for a foul on the play. (Austin Hertzog – Digital First Media)

Westtown looked to be in complete control of the game midway through the third quarter. After three consecutive possessions that resulted in 3-pointers amid a four-minute 15-2 run, the Moose found themselves up 41-35 late in the quarter.

The Hill School never let Westtown pull away late, though.

After ending the third quarter with a basket from Morris just before the buzzer, the Blues held Westtown to just four points in the final frame. Caleb Dorsey hit a 3-pointer with 2:27 to go to cut into Westtown’s lead and make it 45-43. Then after the teams traded a pair of points, Morris hauled in a pass from senior Chase Audige and took it the length of the court to even it up at 45-45. Then less than 30 seconds later, he forced a steal and took it the distance to give his team its first lead since the early stages of the third quarter.

“It was a whole team effort, especially at the end,” said Audige, a William & Mary commit, “but it was all DaQuan Morris. He won that for us.