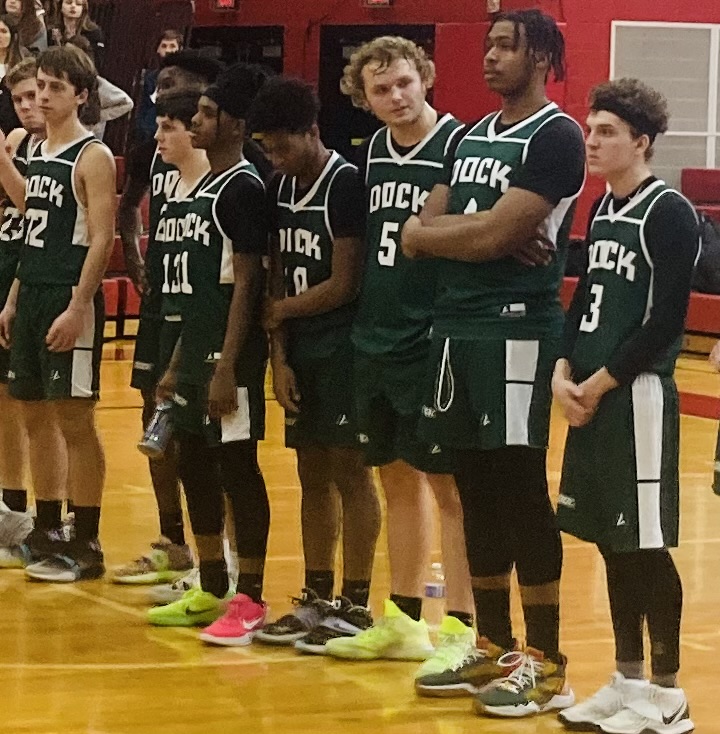 Dock gets ready to receive its runner-up medals at the District 1/11-3A final on Saturday, March 5, 2022. (Kev Hunter/MediaNews Group)

FORKS TWP. >> Everywhere Dock Mennonite looked, there was a tall task to overcome.

Executive Education sprouted two players that were 6-foot-5, another that was 6-11 in the towering Moustapha Sanoh, and in addition, the Raptors brought a rare blend of quickness and athleticism to the court.

Still, the Pioneers hung in, ultimately falling 68-56 in this District 1/11-3A Regional at Easton Middle School Saturday afternoon.

“Coming in, we knew they were a really good team and we had to play a really good game for us to win,” said Dock’s Nathan Lapp, who scored a team-high 29 points. “We didn’t play perfect — we had some careless turnovers, and that hurt us in the first half. But we never gave up.” States are still ahead for Dock, which will open PIAA Tournament play Wednesday.

“We’re not done — that’s the good thing,” Lapp said. “We have at least one more game left, and hopefully we can make a good run in the state playoffs.”

Dock trailed just 11-9 after one quarter but a 17-0 run for the Raptors had just begun and would carry into the second.

Kobe Magee, who had a game-high 30 points, was hitting threes, getting to the hoop and slammed a breakaway dunk; Jeremiah Bembry was finishing in transition; and Patrick Allieu was scoring off rebounds.

Dock had a costly string of turnovers, and the Raptor lead grew to 30-17 by the half.

“We didn’t take care of the ball,” Pioneers coach Mike Fergus said. “(Executive Education) is really long and really athletic and really quick, and that hurt us. We didn’t do a good job taking care of the basketball and when you play a team that’s as athletic as this, there’s no margin for error.” Dock fell behind by 20 after three quarters, but got as close as 12 in the fourth.

Lapp buried five 3-pointers for the Pioneers in the contest and freshman Tony Martin added 14 points.

But with the height Dock was facing, the toughest thing to overcome became…

Dock didn’t go away though, a three by Lapp bringing the Pioneers within 62-50 with 1:45 to play.

“That’s the thing I love about this team. We always play hard and we always play until the final buzzer sounds,” said Lapp. A young Pioneer squad, with one senior starter in Tomir Johnson, now gets ready for states.

“I was proud of how we came back and fought to the end,” Fergus said. “This is nothing but great experience for all our guys.”