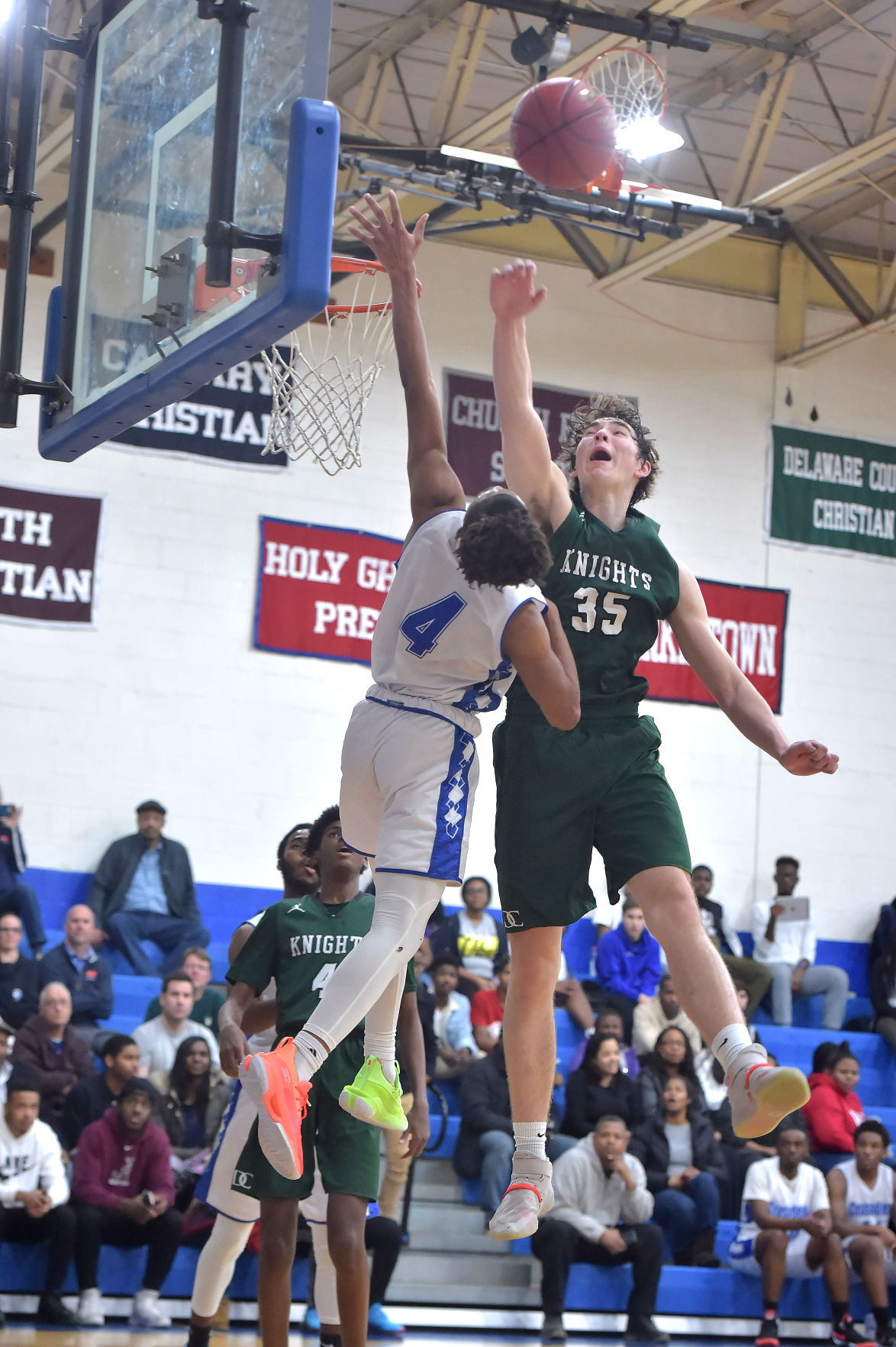 Delco Christian's Jackson Piotrowski, right, blocks a shot by The Christian Academy's Isaiah Mitchell in the fourth quarter of a game in December. Piotrwoski was voted to the Class 2A all-state third team Tuesday. (Pete Bannan/MediaNews Group)

Jackson Piotrowski has become a perennial pick in the Class 2A All-State selections. Before he heads off for a prep year, the senior added one more Tuesday.

The Delco Christian forward was named to the third team all-state in his classification, as voted by Pennsylvania sports writers.

Piotrowski averaged 17.7 points per game for the 17-win Knights. He added 8.2 rebounds and 2.2 assists per game and four times cracked 30 points in a game. Despite a strong regular season, the Knights fell to Church Farm in the District 1 Class 2A semifinal, denied a third straight states berth.

Nasine Poplar, a 6-4 combo guard who has become a major-college recruit at Math, Civics & Science, is the Class 2A player of the year.

Poplar made the all-state second team a year ago. He averaged 22 points and five rebounds for the Public League champions and has college offers from Maryland, Auburn, Penn State, Temple, Saint Joseph’s, Miami, Wichita State and Virginia Commonwealth, among others.

Another Philly Public Leaguer, 6-0 senior guard Keshaun Hammonds of Constitution, made the first team for the second straight year.

Also on the first team are Northstar senior guard Andy Zuchelli, Abe Atiyeh, a senior guard from Moravian Academy, and teammates Jake DiMichele and Dante Spadafora from Our Lady of the Sacred Heart.

OLSH was 26-1 and through to the state quarterfinals when the games stopped, having won its two states games by a combined 76 points. Its coach, former FBI agent Mike Rodriguez, was voted the 2A coach of the year.

Tyler Fritz, a 6-3 senior from Marian Catholic, made the second team for the third straight year. He averaged 28.1 points per game. Zuchelli averaged 26.4 points in leading his team to a 24-3 mark, District 5 title and the state quarterfinals.

The All-State teams are voted on Pennsylvania sports writers. They will be released one classification per day throughout this week.