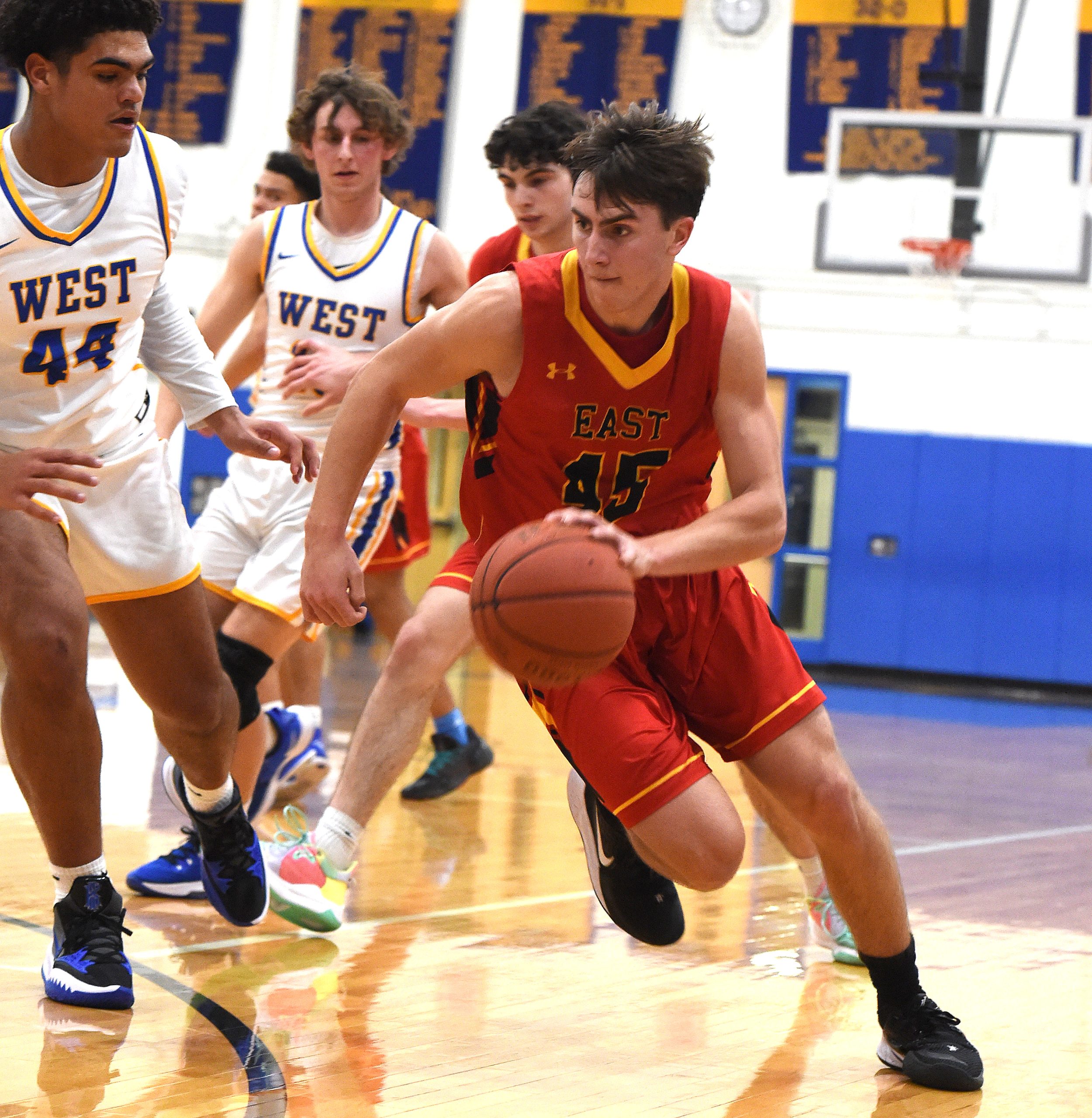 WEST GOSHEN >> Friday night at Jack Byrne Gymnasium, the West Chester East boys basketball team jumped on visiting Penn Wood early, putting them in a large hole. The Patriots tried valiantly to climb out of the hole, but never could quite make it all the way back.

It all added up to a 59-50 win for West Chester East that gave them the ninth seed out of District 1 for the upcoming PIAA 6A playoffs. The Vikings will play the Srcanton-Williamsport winner on Wednesday night on the home floor of the District 2 champion.

West Chester East (21-7) shot a torrid eight for 12 in the first period and jetted out to a commanding 23-8 lead over the Patriots (13-10) after one period. The Vikings received three-balls from Jose Ramos, Jack Kushner and Ryan Price in the first-period blitz. Ramos led East with 19 points, while Kushner added 14 to go along with nine rebounds.

“Oh man, we came out in the first period with a whole lot of energy,” Ramos said. “We wanted to jump on them early and put them back. We knew they would make a run, but we had a real big lead and in the third period when they made their run, we settled down and drove to the basket and got to the free throw line. We really wanted the number nine seed and we played like it.”

Penn Wood cut into the lead in the second behind the stellar play of Evan Borward, who led all scorers with 26 points.

Borward carried the Patriots’ offense and at halftime it was a 30-21 West Chester East advantage. The Patriots outscoring the Vikings, 13-7, in the quarter.

In the third, Penn Wood really put a scare into the Vikings. They Penn Wood forced six turnovers. When Borward scored on a follow, the lead was down to 30-26. After an East turnover, Mekhi Shillington scored inside and it was a 30-28 advantage, but the tide looked like it was turning in favor of Penn Wood.

But, the Vikings righted the ship when Ryan Price drained a long three and Kushner scored inside. After a miss, Kushner drove the lane, was fouled and sank two free throws. Then, Josh Sherlock, who played a strong game with 13 points, hit a runner and at the end of the third the lead was back up to 44-36.

“We really got out early and that is what we wanted to do,” Kushner said. ”Their pressure started to bother us a little, but we settled down and made some key plays. I like the ball in my hands in those situations and the guys know they can depend on me. I just got locked in and we made our run to get the lead again.”

The fourth period was even as both teams scored 14 points and the Patriots’ comeback attempt was hindered by a very cold three-for-12 shooting performance from the field in the period.

Baskets from Kushner and a pair late by freshman KJ Cochran stymied any hope of a comeback. The Patriots had to settle for the number 10 seed in states. East goes into PIAA play on a three-game winning streak.

“We started the game in great shape,” West Chester East coach Tom Durant said. “We knew they would make their runout. The key is to withstand and make a run of your own.
“Jack Kushner is a beast. He does all the little things you need to do to win games and that is why he had the ball in his hands late in games.”