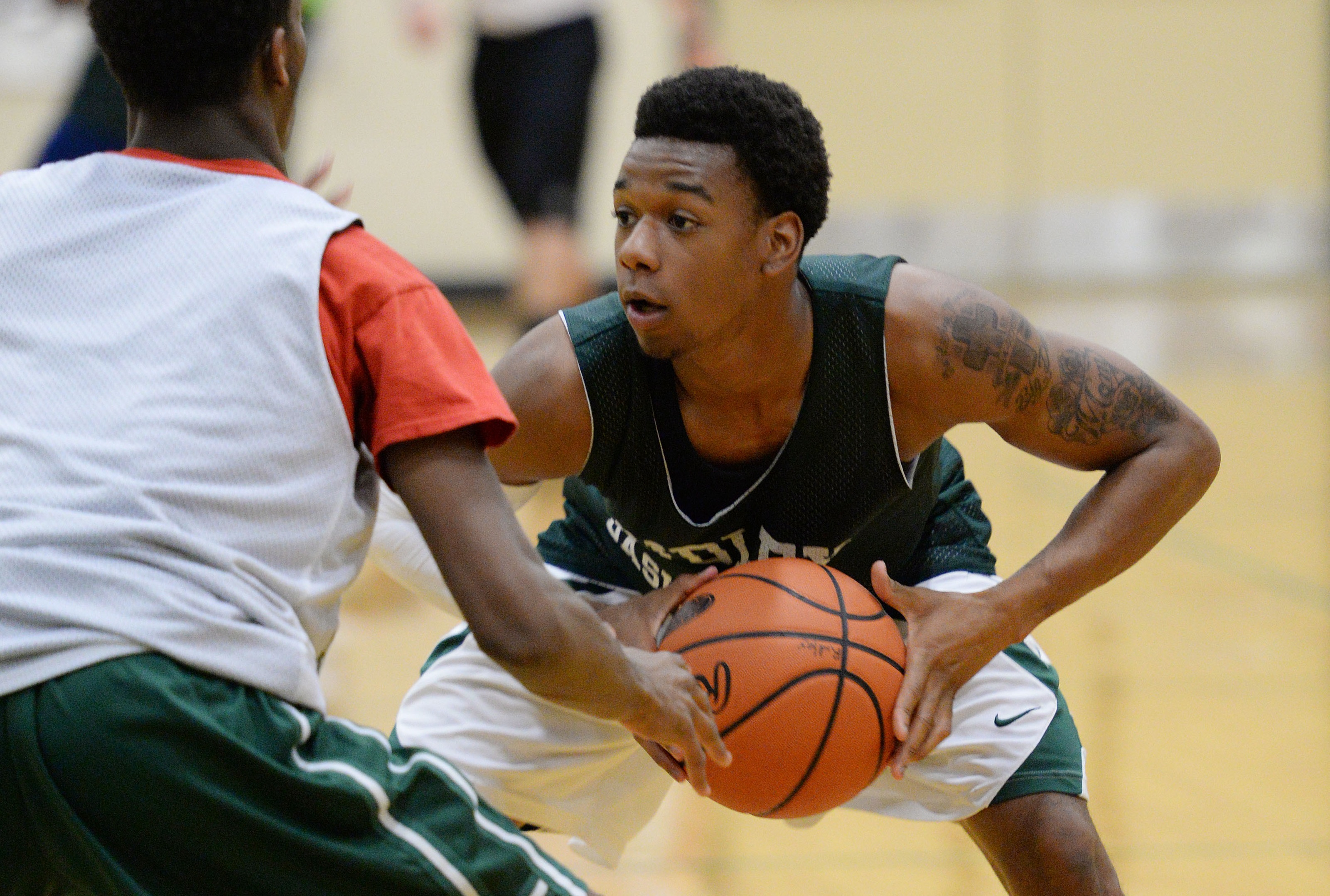 RIDLEY TWP. >> By the time the whirlwind that landed Ridley in the semifinals of last season’s District One Class AAAA tournament and the first round of the PIAA tournament subsided, Brett Foster knew it was time to move on to the next one.

Something in the program had changed irrevocably during that run, somewhere in the 20 wins in 23 games, in the clobbering of Lower Merion and Conestoga, the latter previously unbeaten in the league, en route to a Central League title.

The torrid streak and the return of three starters come accompanied by the weight of increased expectations, which Foster and company are ready to shoulder.

After leading Ridley in scoring last season with a 16.3 points-per-game average, All-Delco point guard Brett Foster, right, believes he has to be a ‘coach’ on the floor for the Green Raiders. (Times Staff/Tom Kelly IV)

“That’s exactly how it is,” Foster said at practice Wednesday about the pressure of being league favorites. “We don’t want to make it look like it was a fluke or anything. We’re a good basketball team and we beat some good basketball teams, so of course we want to get back. And just as a player, you want that feeling again, the big crowds and stuff, so that’s what we’re working for.”

Foster will lead the charge to recapture that winning feeling. The senior All-Delco point guard led the team at 16.3 points per game a season ago. He’s 69 points shy of 1,000 for his career.

But he’s not the only returnee from last year’s streak to states. Julian Wing will anchor a frontcourt that offers more size (Mike Patterson is 6-foot-3, Jim Bramwell is 6-foot-2) than experience. Ryan Bollinger, who drained a team-high 56 triples last season, will start as the shooting guard, with Liam Thompson and Kylon Hicks filling larger roles than last year.

Even for those not directly involved, Wing believes the experience of a district semifinal at Temple and a state game inoculates the entire group with a winning mentality. For a program that has made districts 14 of the last 15 years, including six straight, the goals are evolving.

“Hard work carries over because we have three leaders on the team, me Brett, and Ryan,” Wing said. “We’ve been here four years and we know what to do.”

Foster envisions his role growing even from last year’s outstanding heights. It may not be in terms of points but in his holistic impact, one he hopes will propagate beyond his career.

“Now being a senior, even though I am the point guard, I have to be even more of a point guard, like a coach on the floor,” Foster said. “And just lead the younger guys, even if they don’t play varsity, just teach them and keep their spirits up even if they have a bad game.”

Penncrest qualified for the District One Tournament for a seventh straight season and made the PIAA tournament, but four senior starters powered that effort, leaving coach Mike Doyle big voids to fill.

Much of that burden falls on 6-foot-6 senior forward AJ Taylor, who endured growing pains and a high ankle sprain but was a productive contributor last year. The replacements have plenty of size — 6-foot-2 junior Manny Taylor, 6-4 senior Jimmy Carpenter, and 6-8 sophomore Ray Somerville. But stewardship of the backcourt, so long in the trusty hands of the class of 2015, must be sorted among brothers Tyler and Shaun Norwood, Justin Ross and Mike Mallon. Tyler Norwood, a sophomore, is the only one to see significant minutes last year.

Similarly, Springfield must replace 90 percent of its scoring from a 15-win campaign, with forward Nick Fox and point guard Kyle Long the only experienced returnees.

Size won’t be the trouble, with Fox, Kyle Ryan, Mason Liberty, Justin Collins and Great Orjih all standing 6-3 or taller. But coaxing backcourt scoring from Steve Randolph, Matt Methlie, Alex D’Angelis and Kyle Sullivan will be a tall task, even as Long’s exemplary court vision makes those around him better.

Kahleel Henry, Upper Darby’s second-leading scorer, returns for a quick Royals squad with plenty of backcourt experience provided by Troy Butler and Juwan May-Craddle. Sophomores Raquon West and Jalun Trent will also represent the class of 2018 from an early juncture.

Jason Graham anchors the frontline, while Maurice Grier, Nasir Jordan and Anthony McFall will also see minutes in the paint.

Marple Newtown faces the unenviable task of replacing Delco’s leading scorer last year, Nick Giordano. Marcus Weathers, Nick DiCamillo and Mike Rutecki all played significant minutes, while someone from the senior quartet of Pat Gallagher, Jordan Womack, Ben Staud and Mark Dever will have to take charge in the backcourt.

Haverford gutted out 10 wins last season, and another year of growth orchestrated by point guard Jack Donaghy could see that number increase, though the short preseason following a long football season for several key pieces could hurt continuity.

Forwards Connor Guilfoil and Pat Corbett are coming from the gridiron, while Jamie Gillen, Matt Corbett and Isaiah Hart also figure to be important cogs.

Size will be the question for coach Mike Brown, where Brandon Starr and Ryan McCrossan hope to parlay limited varsity experience into extended minutes this season.

Radnor’s youth contributed to a six-win campaign, but it fosters hope for coach Chris Monahan.

Seniors Jake Bodenger, Billy Donahue, Alex Hino and Vinnie Kelly were thrown into the fire last season and figured things out on the fly. The same goes for juniors Mason Ressler and Jack Thompson, who could provide the majority of the scoring punch.

Former Marple Newtown and Upper Darby assistant Dave McFadden is tasked with revamping a Strath Haven program limited to three wins last season. Height won’t be an issue for the former forward, with Kyree Fuller, Josh Singleton and John Harrar filling out the frontline with length. That should open space for Alex Ischiropoulos, who was one of the county’s best 3-point shooters last season. JayVon Green-Springfield and Jahmier Springfield will be among the main ballhandlers.