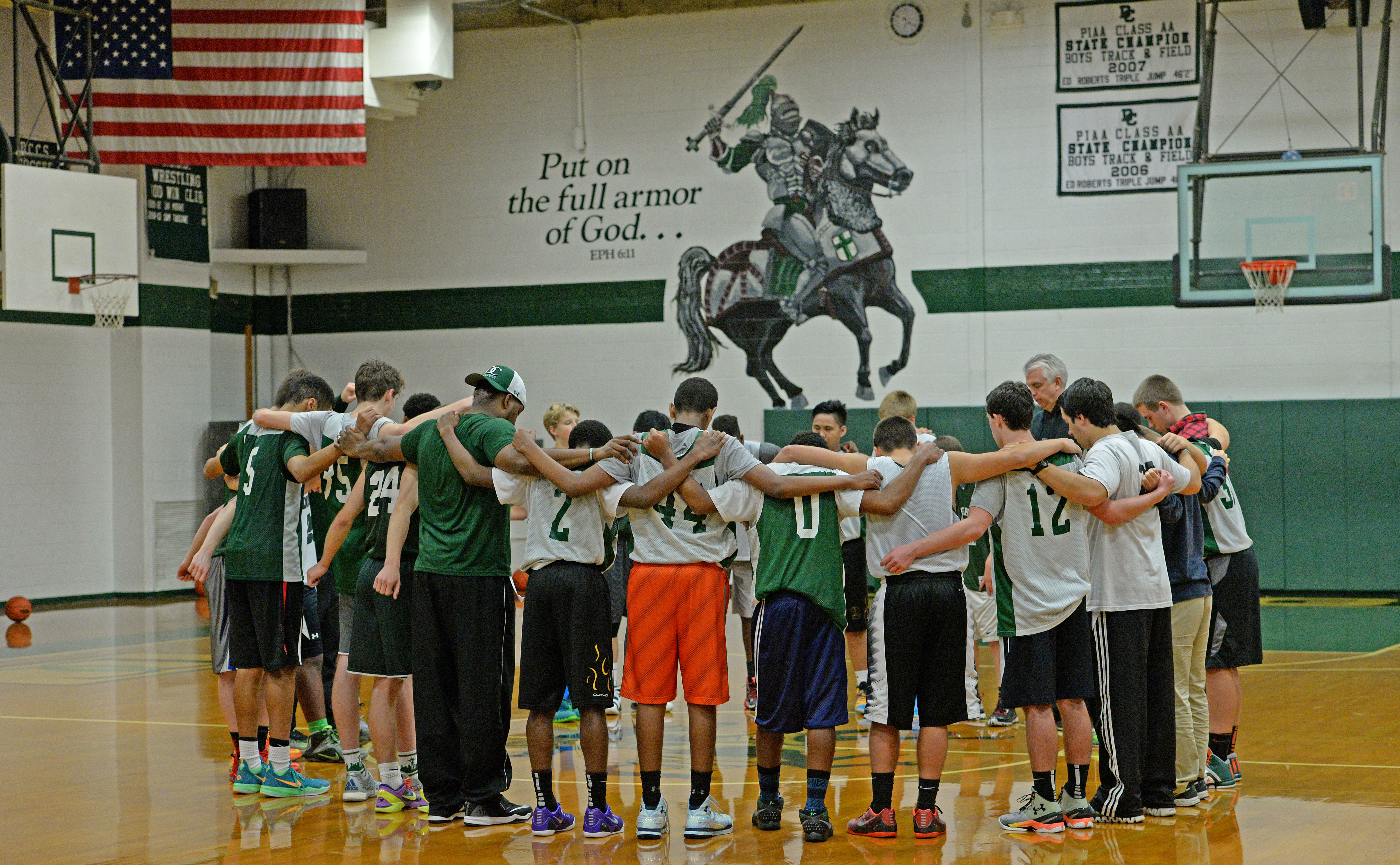 NEWTOWN SQUARE >> In so many ways, the Delco Christian boys basketball team has moved light years away from that Jan. 16 night last season against Holy Ghost Prep. But when the timeline is reconstructed for senior guard Wyatt Harkins this week at practice, the memory still seems fresh.

“Just terrible,” he recalls of the 3-10 record the Knights were saddled with.

Since that turning point, the Knights rose to the challenge put before them, winning an improbable District One Class A title and venturing to the second round of the PIAA tournament. And nearly a year later, whatever switch flipped that night still holds true as the veteran Knights try to pen a second action.

Devin Hill goes up for a shot against teammate Wyatt Harkins in Delco Christian’s recent practice. Both are proven scorers returning for the deep and experienced Knights. (Times Staff/Tom Kelly IV)

“I think once it clicked at that time, it did carry over to the summer,” said Harkins, the team’s leading scorer at 13.7 points per game last year. “…We have guys buying in, not playing selfishly. And the way these first few practices have looked, I think it really has carried over.”

Perpetuating that message through summer workouts and fall basketball is a daunting challenge. But for all the trite declarations of brotherhood and closeness and devotion that pockmark the preseason’s eternal optimism, Delco Christian’s brand seems unique.

The Knights lost only one of their top eight contributors from last season — third-leading scorer Danny Browne, who transferred to Bishop Shanahan. But considering that they did all their postseason damage without co-leading scorer Devin Hill due to suspension, the junior represents a de facto replacement on a team accustomed to adjusting to differing roles.

The rest of the cast is back, as well. Junior TJ Tann will man the point, while Jordan Parks and Nazim Trammell-Wells will do the dirty work of the backcourt while deferring to Hill and Harkins for the scoring. Grant Fischer has grown into his 6-foot-5 frame and poses a significant threat in the post, while Jalen Johns is a good alternative.

The most valuable facet of their quest to follow up this year may not fall on the roster. Some teams have been playing together for two or three years. The bulk of this group traces its roots to a travel team started by Fischer’s father when Grant was a third-grader. For some of the Knights, playing with this group is all that they know from a basketball perspective.

The Knights will lean on that chemistry, knowing they’ve outgrown their upstart status and vaulted to a perch from which others aspire to knock them off.

“We realize that we’re going to have a target on our backs this year, so we’re preparing for that,” Fischer said. “We realize a lot of people are going to be out to get us because they may think that we didn’t deserve it or we just got lucky. But we know that we’ve worked for it. We know that we’re not going to be surprising anyone this year, but it makes us work that much harder.”

Delco Christian center Grant Fisher had a breakout 2014-15 season and looks to be a focal point for the Knights District One Class A title defense. (Times Staff/Rick Kauffman)

“It just gives you a new perspective,” Parks said. “You see everything that we had to do to get there, so you see how hard you need to work and everything. You want to make it there, especially since last year we didn’t make it as far as we wanted to, you get that determination that we’ve got to get back there.”

The 2014-15 Daily Times player of the year Derrick Jones has graduated from Archbishop Carroll, but Paul Romanczuk’s cupboard is hardly bare. He has two Division I commits — Ryan Daly (Hartford) and Josh Sharkey (Samford) — to lead the next wave, plus a deep rotation forced into action when Temple signee Ernest Aflakpui was injured last December.

The transfer of David Beatty puts more of an onus on small forward John Rigsby to score, while height is provided by 6-foot-9 Latvian Miks Antoms.

Bonner-Prendergast went from two wins to 12 in Jack Concannon’s first season, and many of the key contributors from that effort are back. Keith Washington, the team’s second-leading scorer, will reunite with Ryan Germany-Hill and Christian Lane in the backcourt, while the 6-foot-3 triumvirate of John Hargraves, Mike Mercante and Dylan Higgins will patrol the frontcourt.

Augmenting the height is 6-foot-8 sophomore Jake Wilson, while guards Chris Haynes, Steven Perretta and Ayir Purnell should chip in.

Sophomore Chris Johnson and freshman Tripp Pierce will contribute from the start, while Sun Valley transfer Shahir Brown Morris will boost the numbers.

Sixty percent of the starting rotation that earned Episcopal Academy a place as Inter-Ac runner-up last season returns, but the dearth of ball-handling with the departures of Mike Jolaoso and Mike Hinckley is glaring. All-Delco Nick Alikakos remains a Division I-level force in the post, while Matt Woods will punish any team that leaves him unattended behind the arc and Conner Delaney is a hard-working guard.

The front line is in good hands, with Colin Phillips, Kyle Virbitsky, Jermaine Rhoden and Jack O’Connell in the picture. Kyle Sacchetta will step up as one of the veteran guards.

Former Archbishop Ryan coach Bernie Rogers faces a daunting task in his first season at Haverford School. The Fords, who challenged for a league title under Henry Fairfax, sent 79.7 percent of the scoring out the door in All-Delcos Shawn Alston (to Temple) and Lamar Stevens (transfer to Roman Catholic) and Cameron Reddish (transfer to Westtown).

Guard Micah Sims is the only returning starter, while Jack Marshall and Josh Ridenhour logged significant minutes. Kharon Randolph and Joe Dignazio played limited roles, and someone will have to fill the scoring void.

Sun Valley had its growing pains in Steve Maloney’s first season, but those lessons could pay dividends. Wali Sabree is the focal point in the middle, while guards Ishy Ahmad, Kyle Ryan and Ryan Hall proved that they can score.
Sean Steppke will fill a larger role, and freshman Vinny Deangelo could contribute from the outset.

Sean Murphy takes the reins of The Christian Academy in its first PIAA season, coming off an eight-win 2014-15 campaign. He replaces long-time coach Jon Thompson.