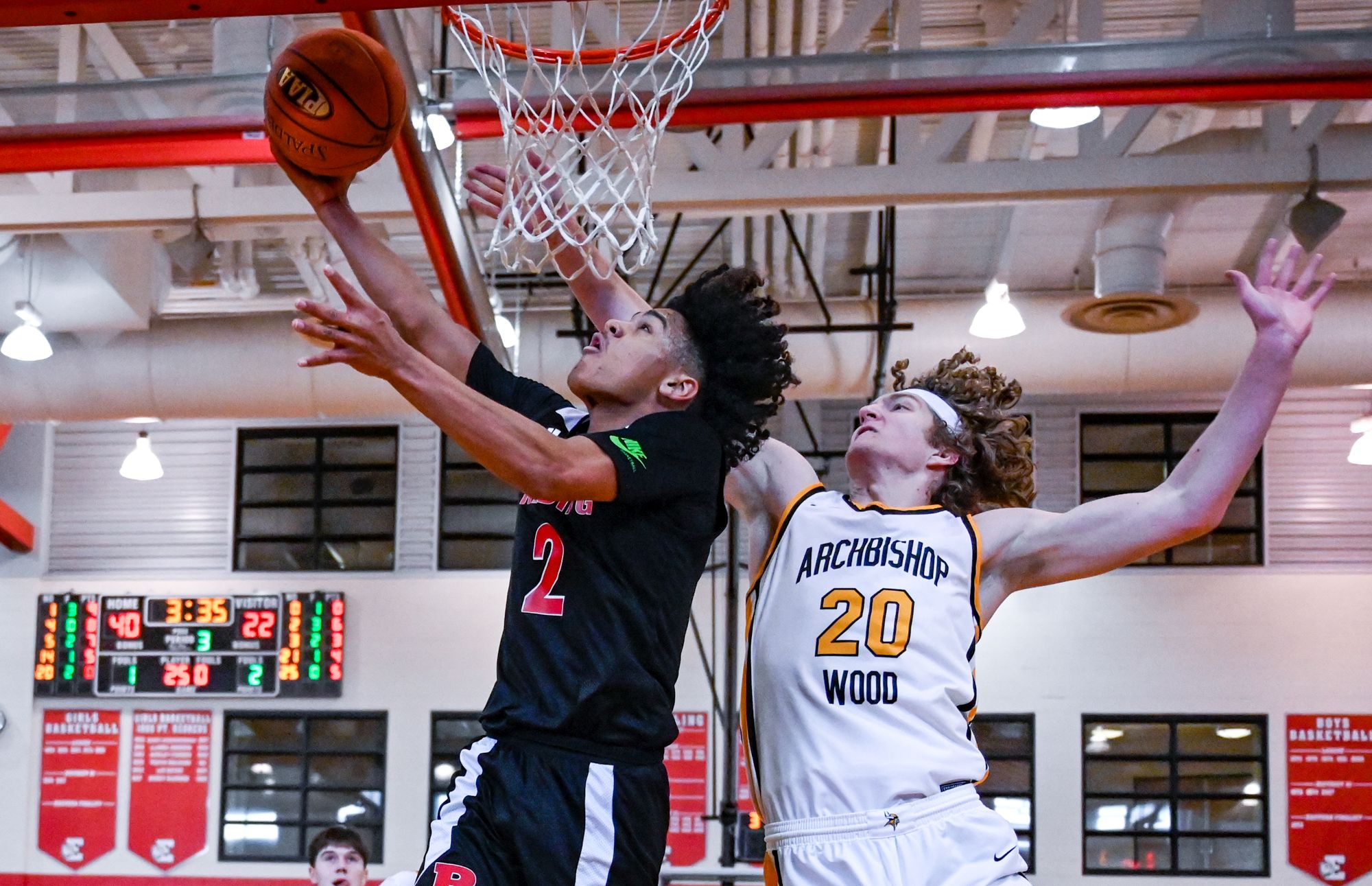 FORKS TWP. >>  Coach John Mosco knew it could not be as easy as his Archbishop Wood boys basketball team made it seem in the first half Sunday afternoon.

In a rematch of last season’s PIAA-6A final with Reading, the Vikings put together a stellar opening 16 minutes, stifling the Red Knights’ high-energy attack and executing on the offense end to build a 36-15 halftime lead in the state second-round matchup at Easton Area Middle School.

Four straight points to start the third quarter extended Wood’s advantage to 25. But then the defending champs woke up in a big way.

“We talked about it at halftime, the game ain’t over,” Mosco said. “They’re not going to stop coming.”

Reading ripped off 16 straight points to get back into the contest The Vikings for a moment settled down, pushing the lead back to 15 at 5:57 left in the fourth but the Red Knights again charged back with a 13-0 run, pulling to within 49-47 after Ruben Rodriguez scored on a drive with 3:29 remaining.

Archbishop Wood, however, never caved. Clutch free throws from Justin Moore and Carson Howard allowed the Vikings to stay ahead and hold off a last-minute Reading burst to claim a 66-58 victory. “That second half was crazy,” Moore said. “It was definitely the momentum of the game changed, felt like the whole crowd was against us, felt like an away game. So we just had to stick together as a team and grind out. It was a hard-fought win by us and I’m proud of our team.”

Moore finished with a team-best 18 points, the senior Drexel commit making 7-of-8 foul shots in the fourth. Wood (19-7) went 15-of-20 from the line in the final quarter and 26-of-32 in the game to survive Reading’s second-half surge and advance to the state quarterfinals for the fourth consecutive season.

“You just got to know when it’s your time to take over the game,” Moore said. “I knew at the end of the game we were struggling getting buckets, so I know I was going to have to try to create for myself and find a way to get easy baskets.”

Tyson Allen totaled 11 points while Bahsil Laster and Jalil Bethea both scored 10 points – Laster going 8-for-8 on free throws  for the Vikings, who face District 7 runner-up North Hills Wednesday at a site and time to be announced. North Hills topped Norristown 77-57.

“We just stayed calm,” Mosco said. “I got family, friends hollering at me to call timeout and I’m a hard-head Italian, I don’t like to use my timeouts, I like to save some of them for the end of the game. It’s worked in the past and it worked today. They calmed down, they settled down.”

BOYS #BASKETBALL: @WoodBoysBball’s Justin Moore with a steal then passes upcourt to Jalil Bethea for the fast-break slam & the foul 3Q vs. Reading. Bethea made the free throw for the 3-point play. pic.twitter.com/ZxuXIJn0CD

Reading (26-4), playing without 6-foot-5 senior forward Daniel Alcantara – who broke his left hand in the District 3 quarters – was paced by Rodriguez’s game-high 21 points, 18 of those coming after halftime.

“Anytime we play them, last year’s championship the game was a war, this year we played them at their place it was a war,” Mosco said.

A Rodriguez jumper made it 18-9 but the Vikings proceeded to score 16 of the game’s next 19 points – a Moore free throw at 31.6 seconds giving Wood its biggest first-half lead at 34-12 before going into intermission up 21.

“I think we caught ‘em off guard,” Moore said. “We just came out here with a chip on our shoulder ready to play and just made easy plays, moving without the basketball getting easy layups.” A basket from Moore and two free throws by Laster had the Vikings up 40-15 with 6:37 in the third but Reading began to make shots, force turnovers and quickly the tide turned.

A Walker 3-pointer made it 40-22 while four straight points from Rodriguez had the deficit down to 14.

Walker drained another three then hit two free throws to have the Red Knights within single digits at 40:31 at 1:44. Wood finally snapped the 16-0 run on Bethea’s 3-point play on a fast-break dunk at 1:06 and went to the fourth up 43-21.

“I thought on offense we stopped moving and that was more of our issue,” Mosco said. “I thought we continued to play defense but we stopped moving so it made their traps easier for them and also made it harder for us to make passes. And first half we were moving it, attacking at the basket and get some slips and that stuff.

“We stopped doing that in the second half, combination of us and them. And we gave the fans a game.”

BOYS #BASKETBALL: Reading’s Joey Chapman with a steal then delivers a bounce pass to a cutting Ruben Rodriguez for a reverse layup 3Q vs. Archbishop Wood. pic.twitter.com/1cRC92xTSA

A Rodriguez three had Reading back down nine but the Vikings responded with six straight points, the last four from Allen to push their lead to 49-34 at 5:57.

Reading, however, kept coming. Back-to-back baskets from Amier Burdine, a pair of Rodriguez free throws at 4:54 when Allen picked up his fifth foul then a 3-point play by Aris Rodriguez made it 49-43 at 4:48.

After two from Burdine and a Wood miss on the front end of a 1-and-1, Ruben Rodriguez sliced to the hoop to score on a drive, pulling Reading  to within 49-47.

Moore was fouled at 3:05 and converted both from the line. A Ruben Rodriguez free throw had Wood’s lead at 51-48 at 2:36 before Moore hit two foul shots 16 seconds later. Two additional Moore free throws at 1:57 had the Vikings up 55-48.

“He just lets the game come to him,” said Mosco of Moore. “He plays relaxed, he lets the game come where he doesn’t have to force anything. It’s not about him scoring 30, it’s about making the right play and making winning plays and that’s what he did.”

A Walker basket made it 55-50. Howard hit a free throw at 1:23 then after rebounding a missed Reading 3-pointer went back to the line seven seconds later and made another for a 57-50 Wood edge.

After an Aris Rodriguez three, a Vikings’ missed on a dunk and the Red Knights pushed down the court for a Joey Chapman basket to get within 57-55.

Howard, however, made two free throws at 25.8 seconds and following a Reading miss Laster connected on two foul shots for a 61-55 lead at 17.8 seconds. A Moore free throw at 9.0 seconds made it a seven-point game.

Moore broke a 5-5 in the first quarter tie with a transition jumper. A Josh Reed basket had the Vikings up 10 at 13-5 with Bethea burying a 3-pointer for an 18-5 lead.

After Ruben Rodriguez’s jumper to open the second quarter made it 18-9, an Allen 3-point play off a drive at 6:53 made it 21-9 and Wood’s advantage stayed in double digits until late in the third.