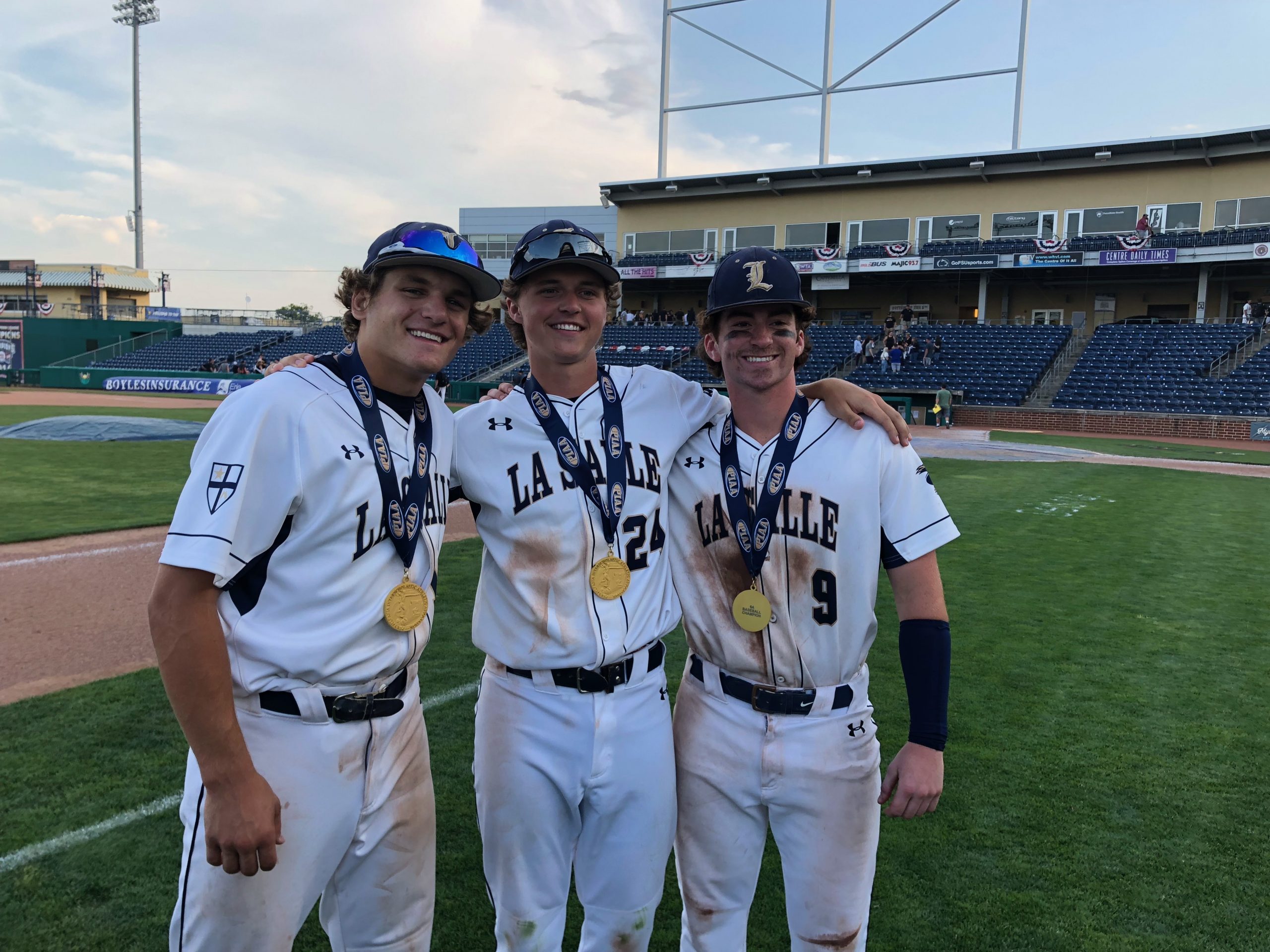 STATE COLLEGE >> Justin Machita and Danny Wagner each had very memorable moments for very different reasons in the PIAA 6A championship game.

The two, along with Joe Cattie, formed an all-senior outfield for the Explorers that formed the heart of their batting order and prevented plenty of hits or extra bases with their ability to cover ground. Each of the trio had at least one key catch Friday at Medlar Field at Lubrano Park and the team’s two runs were scored by Wagner and Machita.

It was only one year together, but the outfield trio was a crucial part of La Salle’s PCL and state titles this spring.

“It’s unbelievable, it feels amazing because it was my last game ever playing baseball on a field with my brothers and it’s the most amazing thing I’ve ever been a part of,” Cattie said. “It’s two other great guys beside me out there, we’ve all been solid this season, making great plays and having fun out there and it means so much to be able to share this win with them.”

Wagner, who played center, ended up as the winning run in Friday’s 2-1 decision after scoring on Jephson Hadson-Taylor’s infield single in the top of the second. Prior to North Allegheny scoring in the sixth, that distinction had belonged to left fielder Machita, but Wagner was very happy he could be the one to say his crossing home plate was the winning margin.

“It sounds like a memory that’s going to last forever,” Wagner said. “It’s something you can always talk about. It really is the greatest feeling ever.”

Machita had his own footnote to make, anyway. The left fielder, who was also a standout wide receiver for the football team in the fall, had the distinction of making the final out of the game when he caught Cole Young’s mile-high fly ball in the bottom of the seventh with the tying and winning runs on base.

“It was up there forever, but I knew I was going to catch it,” Machita said. “I did have so many things going through my head. It went ‘holy crap, this the last out of the state championship,’ then ‘you better catch it,’ it was awesome to bring it in and go celebrate with my teammates.”

None of the three outfielders had a hit Friday, Machita and Wagner both walked before eventually scoring, but that wasn’t the case most of the season. All three batted over .300, combined for 72 RBIs and scored a total of 70 runs. Cattie led the team with four home runs and his 27 RBIs out of the cleanup spot led the team.

Interestingly, he didn’t start the season as an outfielder. A first baseman by trade, Cattie moved to right so the Explorers could slot Mason Sermarini, himself a converted middle infielder, at first. There were some adjustments, but Cattie quickly bonded with Wagner and Machita to form a formidable crew as they filled in the No. 4, 5 and 6 spots in the order.

“I think that’s the whole team atmosphere in general,” Cattie said. “Everyone goes where they need to go and where they’re going to make the biggest impact. We’re all such great friends on this team, so we can pick each other up and all be a big part of the lineup.”

While the infield plays in relatively close proximity to each other, and can come in as a group for mound meetings, things are a little more spaced out in the outfield. That didn’t stop Wagner, Cattie and Machita from coming up with a few ways to keep things loose while trying to rob hits and deny extra bases.

After every win, the trio would come together for leaping shoulder bumps and whoever was dubbed the “outfielder of the game” got to pose while the other two faked taking photos of them. Wagner joked Cattie had a monopoly on the photoshoot after his surge at the plate in the postseason.

“We didn’t get to do it this time, we had to run in and get in that dogpile,” Wagner said. “We have such good pitching, we don’t get a ton of action so we’re always trying to keep it fun.”

With no 2020 season, this spring served as the only crack at varsity the three seniors got. That was also something they were cognizant of and they, along with the rest of their senior classmates, didn’t want to waste any opportunity they were given this season.

“It’s all our seniors in general, but we’ve had a really good outfield,” Explorers coach Kyle Werman said. “Machita coming from being a top PCL receiver, he can track balls out there. Wagner is as smooth as can be and Joe Cattie is a first baseman who converted there but he’s so athletic and boy did he improve as a defender. To know if a ball goes up that it’s going to be caught is a nice feeling to have.”

Cattie made an excellent grab on the run on a line drive by Erik Sundgren that robbed a potential extra-base hit in the third inning. Wagner reeled in a hard-hit ball by Aaron Posey to center that was the final out of a pivotal sixth inning that left a runner on base after the Tigers had cut it to one run.

Then there was Machita, who had to navigate the sun, a way-high ball off Cole Young’s bat and of course, the fact it was potentially the final out that would bring home a state title.

After handling the final out, Machita ran to join the growing pile of Explorers in the middle of the infield. Only, the senior didn’t actually end up in the pile, instead jumping clear over it and landing on the other side.

“I’ve been picturing that for a while, I don’t really like dogpiles so I wanted to go right over it,” Machita said. “I hope it looks cool in a picture somewhere. I knew I could do it between the excitement and adrenaline.” Machita will be back in State College soon, where he will attend Penn State in the fall. Cattie is going to South Carolina and Wagner will be attending Fairfield. For now, none of them will be playing college baseball so Friday’s final was about as perfect an ending as any of them could have hoped for.

“All three of us, none of us are playing at the next level so this was our last baseball game,” Wagner said. “Playing at a beautiful place like this, it’s a big outfield, so you get a little nervous with some power bats on the other side but I felt we patrolled it well and didn’t give up any extra bases, so you can’t ask for anything better than that.”