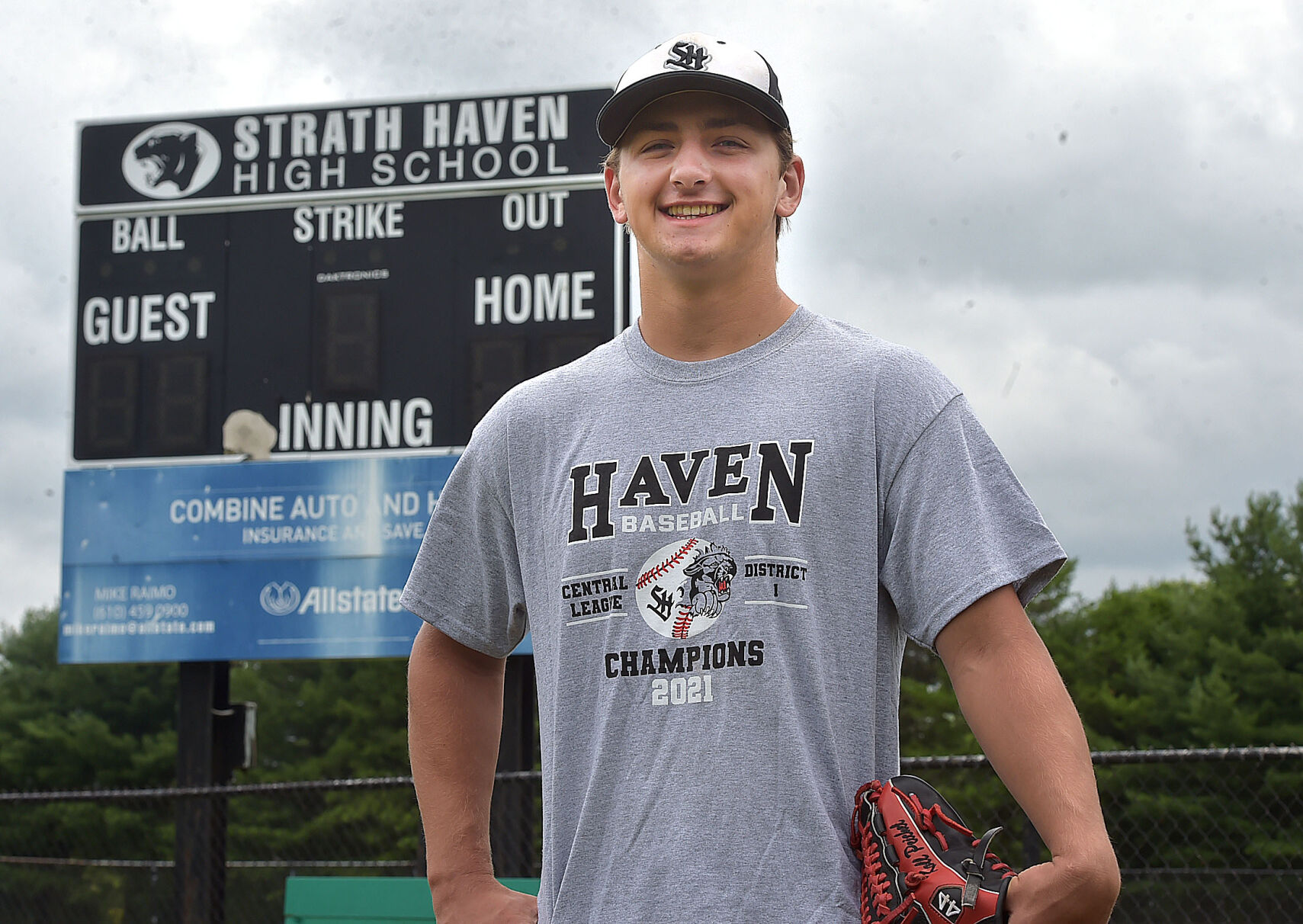 NETHER PROVIDENCE — Koll Peichel’s senior season at Strath Haven can be summed up in one sentence.

It comes from his coach.

“The best statistical year of any pitcher I have ever had in 20 years at Strath Haven,” Brian Fili said.

Peichel was an overwhelming favorite for Daily Times Player of the Year. The majority of Delco coaches nominated him for the award. His peak performance was the 6.2 shutout frames he threw in the District 1 Class 5A championship at home against Oxford. Peichel struck out seven and allowed five hits before reaching his pitch limit with one out to go in the seventh.

Strath Haven’s
Koll Peichel accepts the District 1 championship trophy after he led the Panthers to a 6-0 win over Oxford in the Class 5A final on Tuesday. (PETE BANNAN – MNG)

He delivered a gem, as he did all season, and guided his team to the district title.

“It was all about winning games,” Peichel said last week. “Every time I pitched, I just wanted to win and I knew I had a great team behind me.”

And so, after a brilliant 2021 campaign, Peichel stands alone as the best in Delaware County. He is the first Player of the Year from Strath Haven since Kevin Mohollen in 2014.

Peichel’s senior campaign was a thing of beauty. He posted a 10-1 record with a 0.68 ERA in 71.2 innings, 117 strikeouts and 14 walks. He was no slouch with the bat, either. He was the team’s most dangerous hitter, batting in the middle of the lineup. He crushed his first over-the-fence home run at Haven in a district tournament win over Radnor. For the season Peichel batted .310 with two homers, 15 RBIs and 22 runs scored.

But Peichel’s bread-and-butter is pitching. He’ll continue to deliver his assortment of plus fastballs and offspeed stuff at Dickinson College next spring. In the meantime, he’s getting starts in the summer in the Delco League for Fili’s team, first-place Wayne.

Peichel’s first start in the country’s oldest semi-pro league was a dandy, no-hitting Aston Valley over five innings. It’s no surprise he gravitated toward baseball at an early age, as he comes from a family of good athletes.

“My dad signed me up for T-ball when I was younger. I ended up loving it, obviously,” said Peichel, who trains at Maplezone Sports Institute in Garnet Valley. “I played rookies, minors and majors for Nether-Swarthmore. I always pitched, but I didn’t realize how good I could be. It wasn’t until my freshman or sophomore year, really. I mean, I didn’t even know if college baseball would be for me … but I dedicated a lot of time to it.

“I just like being on the mound because the whole game is on me. My mistakes are on me. Obviously it’s a team sport, but I like being the one who has to make the pitch because if I don’t pitch well, we don’t win. And I like the pressure and I like having the other team chirping at me, because I’m the one who can shut them up. You have the power (as a pitcher) to take down the other team’s energy. I love the competition of being on the mound.”

Peichel started all four years of varsity ball. After emerging as an ace his sophomore year, Peichel intended to lead the Panthers to a great season in 2020. While the coronavirus pandemic prevented Peichel from dominating the Central League, he made a big leap in his development during the lost season.

“After COVID hit, between when I was quarantined and right now, I put on probably eight miles per hour or something like that,” he said. “Obviously, I dedicated myself to baseball. I didn’t play football or wrestling. I lifted all throughout the offseason. I was probably sitting 80-81 (mph) my sophomore year and then my junior year I probably bumped it up a little bit, but this year I was topping out at 88-89. I really ramped it up. The difference between my junior and senior year was huge. For MSI we played in a bunch of Perfect Games (showcase tournaments) in New Jersey and a few in Maryland. Those were big, too.”

By the time senior year rolled around, Peichel knew he was a stronger and more well-rounded pitcher.

“I realized that for my senior year, I can make a statement,” he said. “I had about 15 innings pitched in the 2020 summer with zero walks and I think one earned run the whole summer. I had a bunch of strikeouts, I knew I was getting better. That’s when I knew, I could take that next step my senior year at Strath Haven

Peichel’s only regret came on the final day of the Panthers’ season.

Costly mistakes in the opening round of the PIAA Class 5A tournament resulted in a 5-2 loss to Manheim Township.

Peichel was effective on the hill, striking out 12. Unfortunately the Panthers picked the wrong day to play one of their worst games.

“We beat ourselves,” Peichel said. “The other team knows that they got lucky because we made so many errors and mistakes with our baserunning. One-hundred percent, we beat ourselves.”

The bitter ending didn’t spoil what was an incredible season for Haven’s baseball team. The Panthers had a 21-3 record and won the Central League running away.