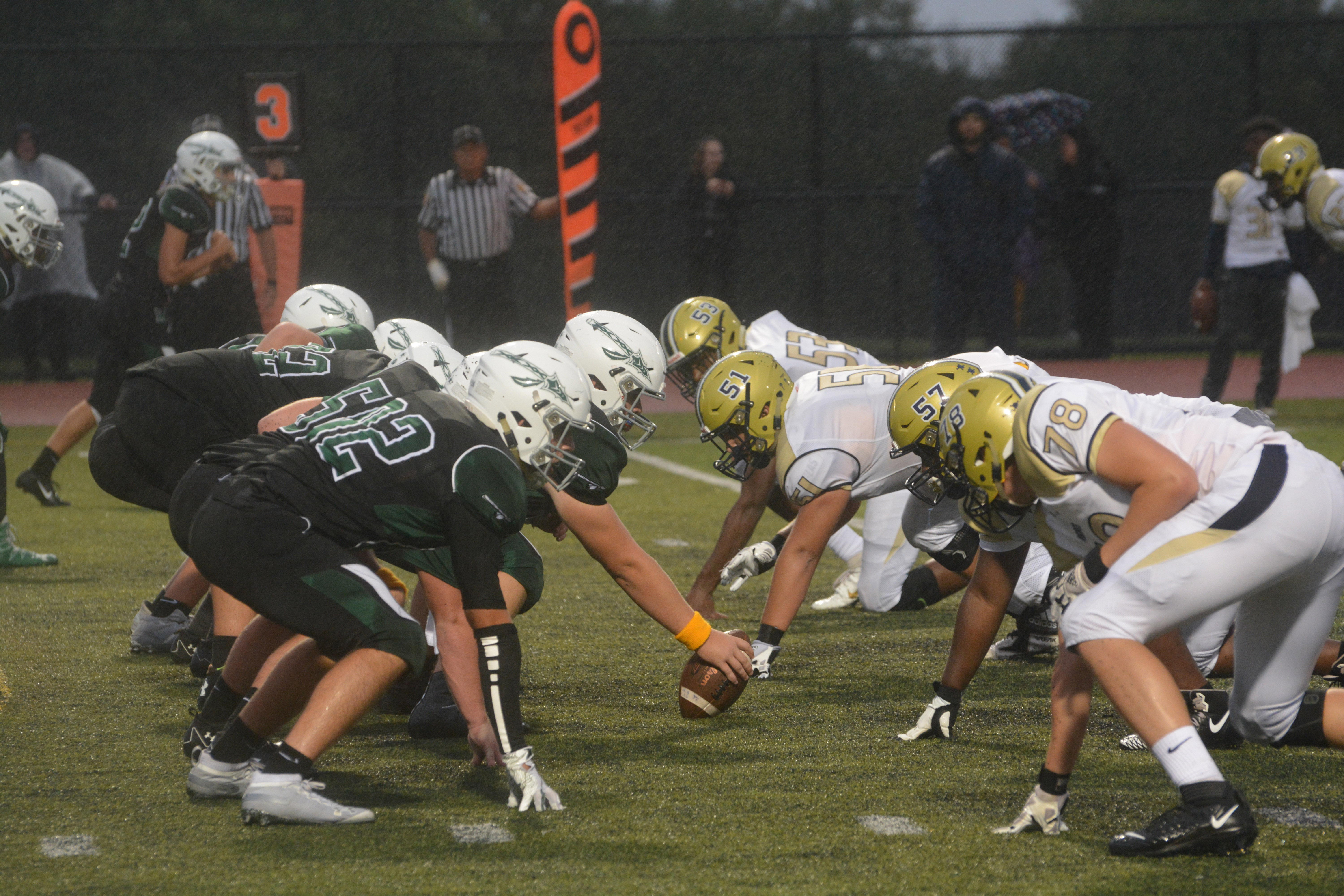 About 18 months ago, Dave Lotier took over a Methacton program with a total of four wins over the previous three seasons. By the end of the 2017 campaign, only 19 players were listed on the team’s roster.

Progress was slow at first, and “victories” were marked by a different standard—getting almost 60 players out for the team last season and playing a full 48 minutes against area contenders. The 2018 squad topped a struggling Boyertown team in Week 5 last year for its only win, and Methacton started this season with a 34-6 blowout of a rebuilding Harriton team.

But there was no underplaying Friday’s victory over Upper Merion, a Class 5A playoff team one year ago. The Warriors ran for almost 250 yards, 80 of them coming on Mike Torcini’s touchdown run on the first play from scrimmage in claiming a 21-12 victory.

The victory marked several accomplishments for the program, both tangible and symbolic. For one, it’s the first time in five years that the Warriors have possessed a winning record beyond Week One of the season.

“I’m not surprised how they played – that’s a physical football team,” said Upper Merion coach Victor Brown. “Penalties killed us, and I would have liked us to be a little sharper there.”

Methacton’s Matt Blakemore picked off UM’s Dale Clayton late in the first quarter, setting the stage for Torcini’s second long TD run, this one a 57-yarder. Upper Merion would mount a comeback, but Methacton recovered a late onside kick and ran out the clock to cement a defining victory.

“It goes back to the practice we put in throughout the week, and the mentality we’ve been instilling for the past two years,” said Lotier. “We’ve learned from our failures, and it does feel like a turning point for us.”

The victory was particularly satisfying after the Warriors struggled last week in a 35-7 loss to Plymouth-Whitemarsh. Lotier was pleasantly surprised by the squad’s response.

“I was a little bit concerned, to be honest. We thought we’d compete in that P-W game, and we went in there and got smacked,” he said. “When the kids showed up on Monday though, they were ready to get after it. We really emphasized conditioning, and when you do that you usually get some stragglers. We didn’t have to tell one kid to kick it up. That’s a testament to our seniors leading by example.”

The lone down note for Methacton coming out of Friday night appeared to be a big one – Torcini, who ran for 185 yards and two scores in the first half, spent the second half on the sideline with his arm in a sling.

“We were thinking broken collarbone, and he’d be done for the year,” said Lotier. “It’s definitely going to be a several-week injury, but we’re hopeful that he’ll be back there again sooner rather than later.”

Justin Carfrey and Nick Olivieri figure to see the bulk of the carries in Torcini’s absence.

Looking at the big picture, Lotier wasn’t shy about sharing the team’s goals, and where he feels they stand going into a game with 2-1 Pottstown Friday.

“The goals we set were to finish above .500, and if you do that you should be in position to fight for a playoff spot,” Lotier said. “And that’s where we are.

“We took one day to enjoy this (Upper Merion) win, then our focus changed immediately to getting to a 3-1 record. Pottstown beat us last year in a game we thought we could have had. We think we’re at a point where we can both compete with anyone on our schedule, but we also can’t look past anyone.”

Around the Area >> Upper Merion’s loss means Owen J. Roberts is the PAC’s lone remaining undefeated squad. It wasn’t easy to maintain that status, however, in a 14-13 win over Avon Grove. Jonathan Hannevig made the play of the night, taking down Avon Grove’s Sean Glatts on what the Red Devils hoped would be the decisive two-point conversion. But after recovering an onside kick, Avon Grove moved into field goal range, only to see Bobby Smith’s 51-yard effort glance off the crossbar.

For the night, Hannevig had a 78-yard TD reception, an interception and the tackle to prevent that decisive two-point conversion.

A simple look at the final score made Friday’s Boyertown-Pottsgrove tilt look like a one-sided affair, but in reality, the Bears held a one-point lead going to the fourth quarter before the Falcons turned it on. Isaiah Taylor finished the evening with 255 yards rushing and five scores as Pottsgrove (1-2) broke through with a 41-21 victory. The Falcons’ defense forced four interceptions and benefitted from three sacks by Darrian Seaman. For the Bears, Jamison Moccia had his third career kickoff return of 90+ yards, a school record.

Speaking of school records, Ryan Engro and Dante Bonanni rewrote a significant portion of the passing/receiving marks at Spring-Ford Friday, as Engro went 25-of-50 passing for 409 yards (school records for completions, attempts, and yardage) in a loss against District 3’s Wilson West Lawn. Bonanni accounted for 174 of the receiving yards, pushing him past Andrew Scanlan for the school’s all-time receiving mark.

Phoenixville’s first victory came in a decisive 60-6 win over Dobbins of the Philadelphia Public League, with four different Phantoms accounting for eight rushing touchdowns. Anthony Stevenson eclipsed the 100-yard barrier and added a pair of scores, while Aidan Foley contributed 80 yards and three TDs. The defense held Dobbins to only 54 total yards and forced a turnover.

Perkiomen Valley slugged its way past Pennridge, 24-6, limiting Rams QB Bobby Croyle to 5-of-25 passing and limiting Pennridge to only seven first downs on the evening. Jon Moccia had 71 yards rushing and two scores for the victors.

Pope John Paul II put together its most complete performance of 2019 in a 28-0 shutout of Chichester. Kamal Gray accounted for 270 total yards (161 passing, 109 rushing) and three scores, but for the second straight week, the Golden Panthers’ defense was the story, holding Chichester to 142 total yards and forcing three turnovers.

Daniel Darden and Ezra Figueroa each ran for over 100 yards in Pottstown’s Senior Night victory over Kutztown, 37-14. The Trojans’ defense allowed only 23 total yards before halftime, with the second half played under running clock rules.

Area schools won’t be too sad to see Upper Moreland move off the schedule, as the Bears claimed their second straight victory over a PAC Frontier opponent, this time topping Upper Perkiomen, 26-0. The Tribe managed only 65 yards of total offense against a Bears defense that held the area’s leading rusher, Logan Simmon, to minus-10 yards on the evening.

A Look Ahead >> There’s no rest for the weary when Perkiomen Valley travel to Kottmeyer Stadium in Downingtown to take on the Whippets. After a Week 2 loss to Downingtown East, the Vikings now try their hand against D-West, arguably District 1’s most impressive team through three weeks with convincing victories over Garnet Valley, Central Bucks South, and Neshaminy.

Two big inter-division matchups are on tap as Methacton travels to Pottstown and Upper Merion hosts Owen J. Roberts. All four squads boast winning records and will try to gain divisional bragging rights and valuable momentum for the start of PAC play in Week 5.