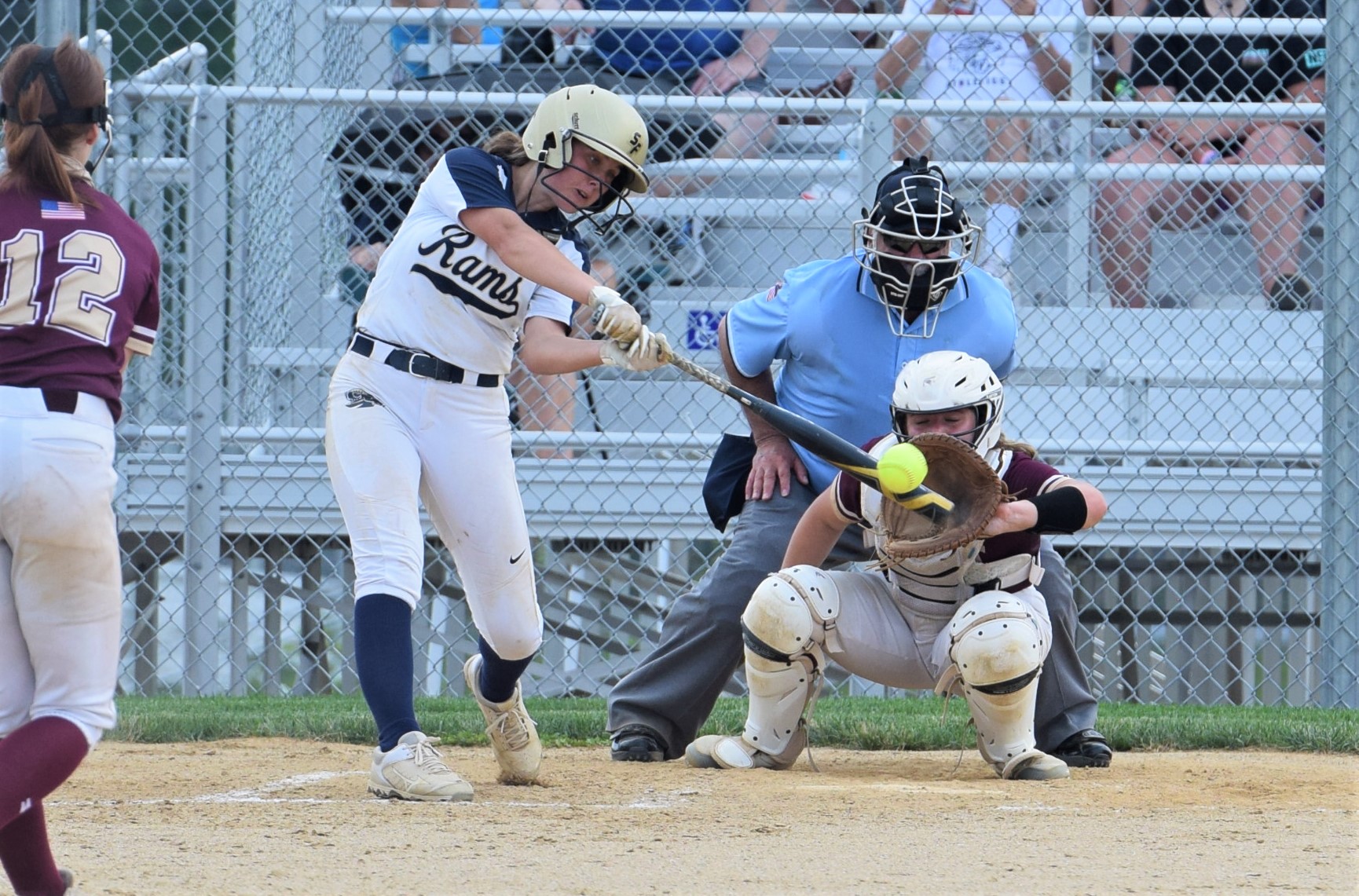 Spring-Ford's Lexi Wescott hits an RBI single in the fifth inning against Whitehall in a PIAA 6A first round game Monday at Boyertown. (Austin Hertzog - MediaNews Group)

BOYERTOWN >> It’s built for the long haul … the “haul” being a run in Pennsylvania softball’s 2021 post-season.

Spring-Ford opened play in the PIAA Class 6A playoffs Monday by taking on Whitehall at Boyertown. Having roared to their first District 1 championship in about a decade, the Rams put on another total-team display by dispatching the Zephyrs in five innings, 10-0.

A six-run fifth propelled Spring-Ford (21-0) to the early finish against a Whitehall unit that was runner-up in the District 11 playoffs. There were heroics from the usual cast of contributors — Jules Scogna pitching a two-hitter, Madison Peck hitting her third home run in as many games of the last week — but several other teammates provided timely hitting.

Lexi Wescott produced a 3-for-3 line while driving in a pair of runs, and Danielle McNeil made it a 10-run affair in the fifth by doubling Madi Walsh (four RBI) home from first. That helped move Spring-Ford into Thursday’s quarterfinal round, where it will play the winner of the Hazleton/Haverford first-rounder.

“It’s very important to go out at the beginning and win games,” Wescott noted. “We work very hard as a team. The only way we’re going to get a championship is as a team.”

“Each game, we know our energy has to stay up,” McNeil added. “Everything we do, we do as a team.”

Scogna did her part in the circle for the Rams. The junior hurler ran her current shutout-inning total to 19, striking out four and walking none.

The Zephyrs’ only two baserunners were the players hitting safely: Abby Vivian in the fourth, Abbey Reese in the fifth. Scogna ran full counts to only four of the 17 batters she faced.

“Mondays have been interesting for us,” SF head coach Tim Hughes said. “We wanted to see what we could do. Our kids did really well.”

The bataround fifth saw the Rams bunch five of their 15 hits into the outburst. Madison Peck and Lester (both 2-for-2) scored off the overthrow by starting pitcher Madi Cunningham, who ended up replaced on the mound by Kendra Fox with one out and Spring-Ford up 7-0.

Noelle Reid (2-for-4) and Bre Peck then scored ahead of Walsh, who reached base on a fielding error by the Zephyrs. McNeil followed with the game-ender, a double to right-center.

“My main goal was to drive Madi in,” McNeil said. “The pitch was right down the middle.”

Spring-Ford, which has outscored the opposition in its six previous games by a 43-3 margin, took the lead for good in the second. With one out, Madison Peck put a 2-2 offering off starting pitcher Madi Cunningham over the wall in straightaway center field for a 1-0 lead.

In the third inning, Noelle Reid, Bre Peck and Wescott started off the at-bat with successive singles before Walsh plated Reid with her sacrifice fly to right field. Spring-Ford reloaded the base when Madison Peck was hit by pitch, but the Zephyrs got out of situation without sustaining additional damage.

In the fourth inning, Morgan Lester and Ellie Jarrell (singles) got on base, Bre Peck was then intentionally walked to load bases.

“We’ve had that situation before,” Hughes said. “Pick and choose. Teams have walked her (Peck) before.”

Spring-Ford’s Bre Peck fires to first base as third baseman Danielle McNeil ducks out of the way against Whitehall in a PIAA 6A first round game Monday at Boyertown. (Austin Hertzog – MediaNews Group)

Wescott responded to the situation by hitting and RBI single to center. Walsh’s groundout to the mound enabled Jarrell to score the second run.

“I knew it was important to get the run,” Wescott said. “I wanted to back up my teammates.”

NOTES >> Cunningham ran up a 12-pitch at-bat on Scogna in the fifth, ultimately flying out to Madison Peck at shortstop. … The game was completed in a breezy 1:38.

Spring-Ford pitcher Jules Scogna delivers a pitch against Whitehall in a PIAA 6A first round game Monday at Boyertown. (Austin Hertzog – MediaNews Group)