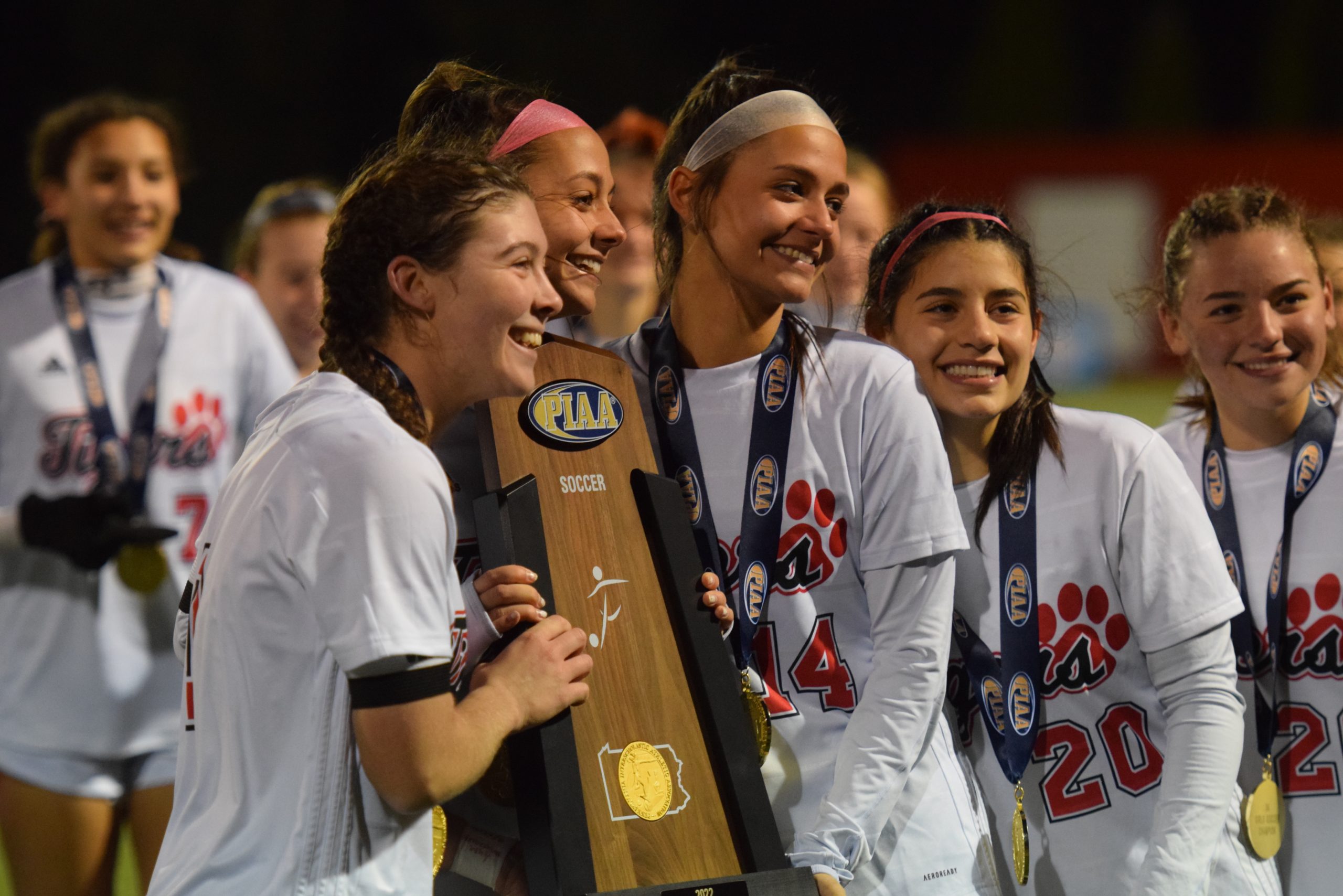 “We wanted to go out and punch them in the mouth and see how they’d respond to it,” said Freed.

There’s no other way to describe the way Upper Perkiomen struck Moon at the start of the PIAA Class 3A girls soccer championship game Friday. Megan Cairns’ scrappy goal inside six minutes threw the reigning PIAA 4A champions for a loop. It was only the third goal they’d conceded all season.

But Moon knows how to win the big one and they would not take no for an answer.

Senior midfielder Hailey Longwell finally gave Moon its hard-earned equalizer in the 63rd minute and it rode the wave of momentum that led to Sydney Felton’s rebound goal with 9:31 remaining to deliver Moon a 2-1 victory over Upper Perkiomen for a second consecutive PIAA championship. “It’s amazing to end my and the rest of the seniors’ careers this way,” said Longwell, a Duquesne commit. “We’ve always grown up playing soccer with each other since age 5 so to be able to end it with my teammates is truly incredible, a dream come true.”

Moon capped an undefeated season (26-0) while spoiling Upper Perkiomen’s bid for one. Win or lose, Friday marked the end of Upper Perkiomen’s greatest season, one that included a 25-1-1 record, a Pioneer Athletic Conference championship and first District 1-3A title.

“To get to this point with our seniors and some of our juniors who have played together since U8, to end it this way, this result is unfortunate, but it’s a great season to look back on,” said UP captain Mary Kate Sitko.

“I feel like we had the perfect season up to this point,” said fellow captain Kyra Lesko. “We’ve accomplished so much and have so much to be proud of.” The Upper Perk head coach since 2009, Freed is retiring from the post and got to experience his most prolific season in his final one.

“I will miss this group of kids tremendously. So many things both on the field and off it, they’ve been such a delight to be around. That senior group, the four years with them, hands down the best class I’ve ever coached.”

The fairy tale ending appeared possible when Upper Perk came out the stronger of the teams and was in the money in the sixth minute when a corner kick wasn’t cleared, creating a scramble that allowed junior Megan Cairns to get a rising touch for a 1-0 Tribe advantage. “We came out really strong,” said Sitko. “We knew we couldn’t be intimidated and that’s an intimidating team that won 4A last year. We knew the first goal was coming (because of our start) but then they turned the pressure more.”

It was an unfamiliar position for Moon, which hadn’t trailed in a game all season and only surrendered two prior scores all year.

“We’ve not been down as much, but we continuously believe and fight for each other,” said Moon’s Longwell. “We have so much heart and grit on this team. We’re patient and calm and know what it takes to win.”

To score on Moon at all was a badge of honor in Freed’s book.

“I’m not going to lie, and maybe this is me being mean-spirited or vindictive, but I said to (assistant coach Casey Lewis), ‘If I’m going to lose, damn it, I want to score because I’m so tired of hearing how many shutouts they have. I want to ruin their shutout streak at least.’”

Almost immediately, the Tigers took the game over, pinning UP in its half and dominating play.

The stats are not flattering to Upper Perk: Moon led in shots on goal 17-4 and corner kicks 12-2.

“Ava was phenomenal, and defensively I actually thought we played pretty well,” said Freed. “It wasn’t like we made a bunch of dumb mistakes. But when you’re going to be under siege for that long, it doesn’t take much to crack. We eventually got overrun.”

The first half for the Tribe was simultaneously wonderful and terrible: they led by a goal but had just endured a 34-minute barrage.

“Honestly, at one point I felt like I almost couldn’t keep going,” said Lesko. “I was trying to be in front of every single ball, had to be in every spot at once, but I just pushed through it. It continued into the second half and I feel like setting that tone impacts everyone. If I were to give up, everyone would give up. As captains, we have to keep pushing.”

Moon’s assault continued into the second half, Felton flashing wide a golden chance on a rebound of a Longwell shot from distance just two minutes into the half.

“There was a time there where we were dodging bullets left and right and I thought maybe we could ride our luck out. You’ve seen stranger things happen and at least we put ourselves in that position,” said Freed.

The Tigers finally got their breakthrough with 17:05 remaining on a long free kick from the right side by defender Marina Mollica. Her big ball into the penalty area was met by a rising Longwell, whose grazing header fell into the left side of goal to tie it 1-1.

“I always go up trying to win anything possible,” said Longwell. “In that moment I know it’s scrappy out there and you have to go for it because you never know. I went up for it and got it in.”

Moon continued its push and earned the game-winner when Longwell switched fields to Kayla Leseck on the left, who drove a powerful low header that was parried by Long. But junior forward Felton was crashing the goal and got the decisive – and championship-winning – touch.

It’s back-to-back in different classifications for Moon – coached by Bill Pfeifer, the winningest girls soccer coach in Pa. history – after shifting to 3A in 2022. The Tigers are a burgeoning dynasty at this point.

For Upper Perk, this season was the pinnacle of an organic growth with a special squad.

“(Freed is) going out with us. He’s one of the seniors, too,” said Lesko. “We’ve accomplished so much and we couldn’t have asked for more.” Upper Perkiomen players stand during the medal ceremony after receiving their runner-up medals after losing the PIAA 3A final to Moon Friday at Cumberland Valley. (Austin Hertzog – MediaNews Group)