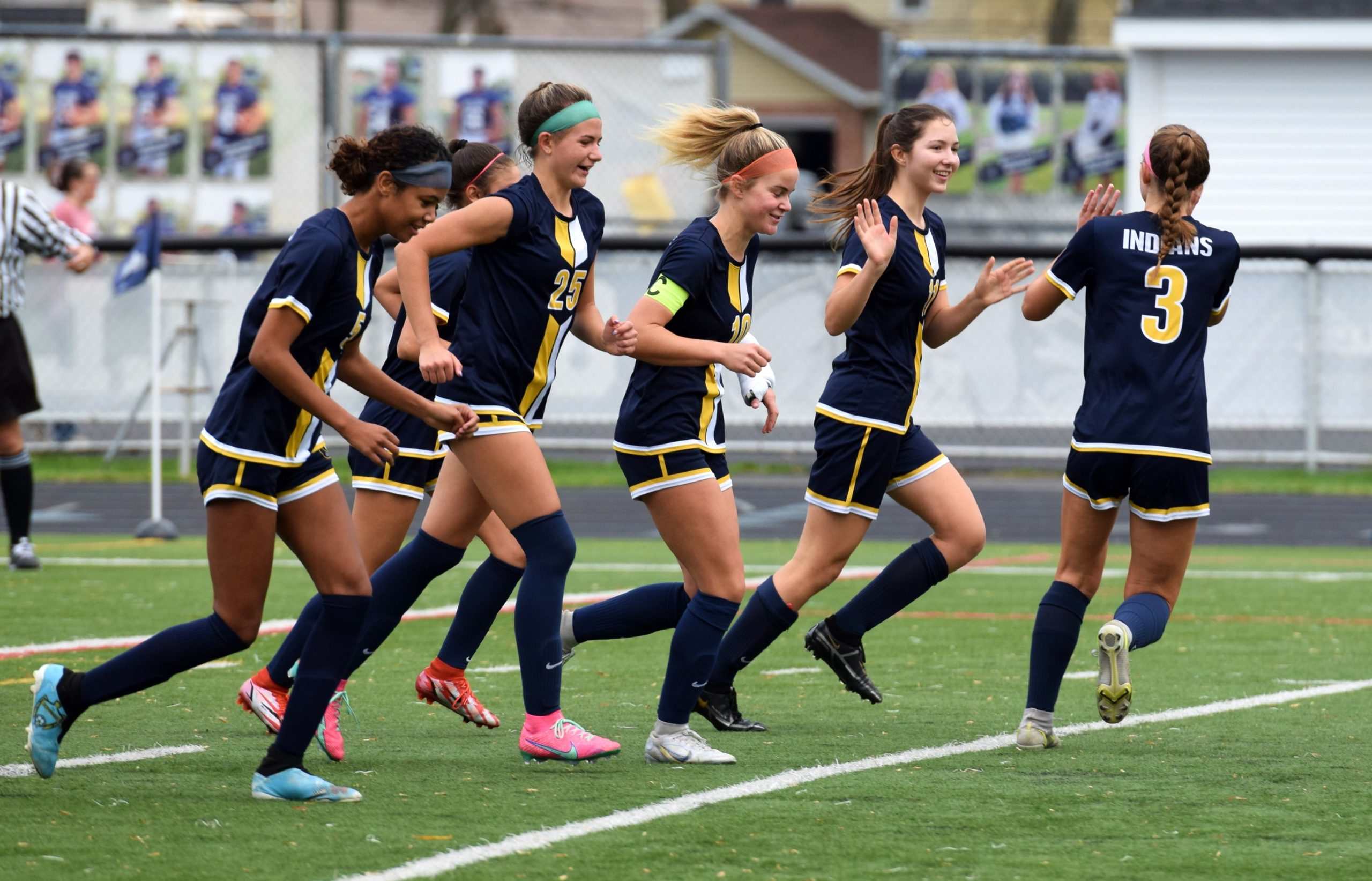 SLATINGTON >> There are so many parts to the Upper Perkiomen girls soccer team’s season that grab your attention: the undefeated record; the District 1 and Pioneer Athletic Conference championships; the 100-plus goals scored; the 18 goals conceded (0.72 per game).
But none of those statistics tell the tale of how they were achieved.

In most cases, point back to relentlessness and you’ll find the answer.

That ball pressure and intensity isn’t something every team sees throughout its season.

Mary Kate Sitko, found on a run by Kylee Casola, scored UP’s sixth from close range with 16:31 to go for the final margin.

Upper Perk’s constant pressure, which is embodied best by senior midfielder Kyra Lesko and junior midfielder Megan Cairns, doesn’t show up on any expanded standings, but tells a lot of the tale of the program’s greatest season to date.

“We’re a really aggressive team. I feel like we all really work for it, try to win 50-50s, get the ball up the field,” said Cairns. “I just try to win every ball. Being aggressive is one of the biggest parts of the game.”

The work rate of Lesko and Cairns is a tone-setter for the entire Tribe team.

“I look up to Megan and Kyra a lot because I want to match their energy as much as possible,” said Roderick. “They’re phenomenal players; obviously Kyra got All-State for a reason and Megan can easily be there next year. It’s an honor to work with them.” It was Upper Perk’s biggest scoring margin in a month, and an entirely unexpected one at this stage of the postseason.

“I’m not surprised. Our team has a very strong bond and connection,” said Roderick. “Most of our wins are not only based on skill, but on the connection with have all together. We’re one big family.”

Upper Perkiomen (24-0-1) meets District 3 runner-up Greencastle-Antrim (21-2-1) in the PIAA semifinals on Tuesday at a site and time to be determined.

Upper Perk turned a negative into a positive from early on after top scorer Sara Edwards exited the game after a collision with Valley View goalkeeper Ryien Carroll on a free kick from Powers in the first minute. Edwards left the game and did not return primarily for precautionary reasons with the game in hand in the first half.

Straup and Roderick normally split time at the third forward spot alongside Edwards and Fisher, but both were called into action with Edwards out.

For Straup’s part, she wanted to place more on her own shoulders.

“It was a little weird, but it made me step up and actually work harder and match (Edwards’) work rate and embody what she does,” she said.

Upper Perk broke through when Powers cleared up top to Fisher, who had a great first touch, spun and played through for Straup, who had acres of space and beat Carroll at the 27:07 mark of the first half.

Within eight minutes, it was 4-0. Roderick embodied the Upper Perk intensity on a scrappy finish at the goalmouth after senior midfielder Lesko’s blasted shot was spilled by Carroll. Roderick collided with the VV keeper, who departed the game after the collision, but got the first touch for the 2-0 lead.

Fewer than six minutes later, the Tribe tallied twice in 18 seconds first with Powers tapping on a scramble after VV backup keeper Emmelia Rucks (9 saves) made a good near-post save; then on UP’s first subsequent attack, Fisher roasted the right side of the Cougars defense, cut inside and rifled past Rucks for 4-0.

Ten minutes later, junior midfielder Cairns outraced the opposition to a loose ball in the VV half, she passed to Fisher who drove at the defense, played wide to Straup down the right who shot near-post for a 5-0 lead with 9:54 to halftime.

The second half stayed in the Valley View half as Upper Perk’s superiority continued while reserve players were given the opportunity to play on the big stage while goalies Ava Long and Jenna Langenback combined for three routine saves.

Upper Perk head coach Mike Freed is relishing the run, calling it ‘surreal’, and loves his team’s intensity and bravery on both ends.

What began as a season filled with promise is now two wins away from a PIAA championship. It’s an unprecedented run for Freed in his final year at the UP helm and it’s one nobody around the Upper Perk team wants to end anytime soon.

“You sit and you hope everything goes right, but the more we win we realize we’re as good as anyone,” said Freed.