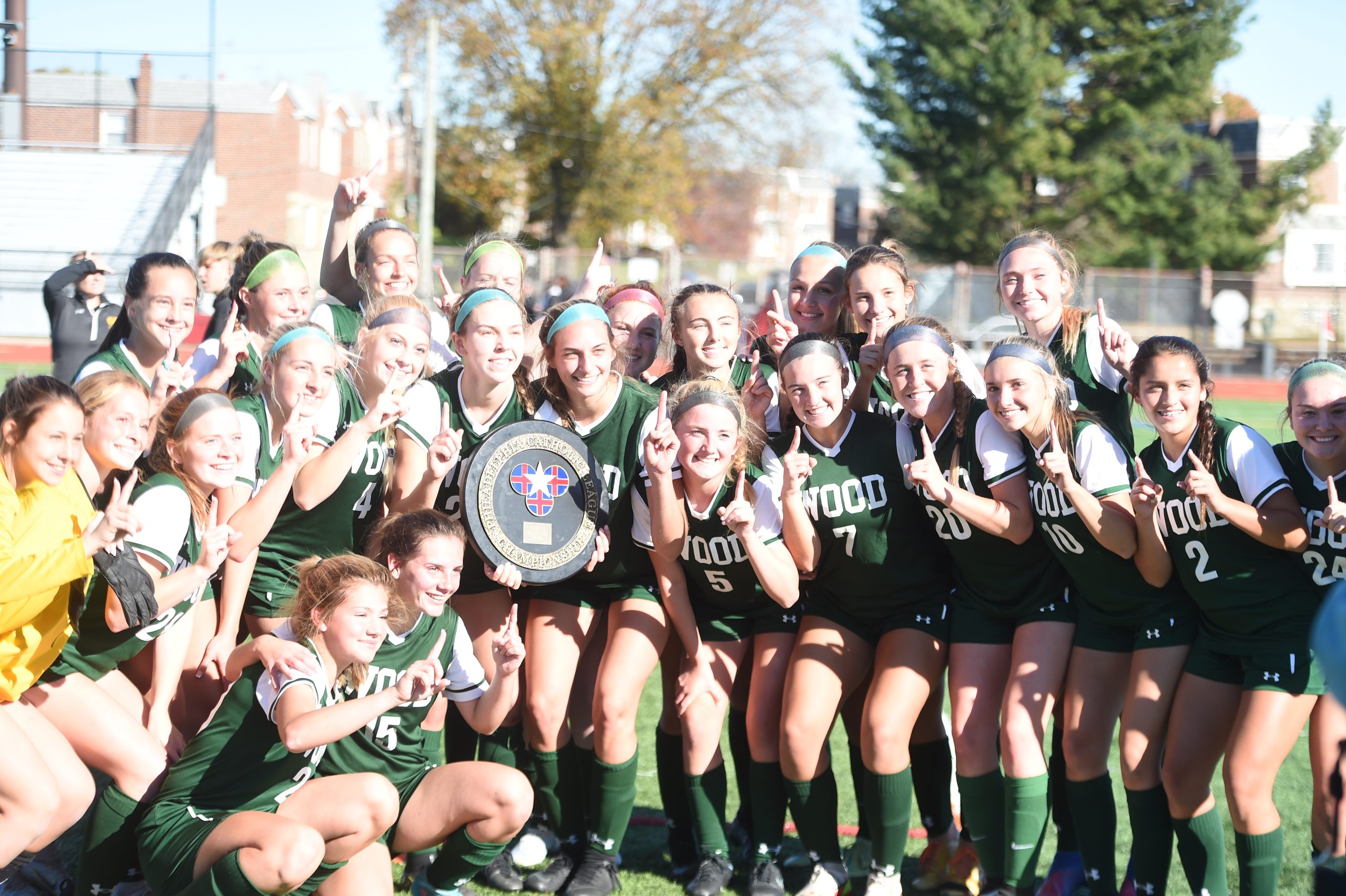 PHILADELPHIA >> Maybe another freshman finds the moment in overtime too overwhelming.

But with the ball on her feet and in striking distance of the goal, Paige Eckert gave herself a chance to accomplish what she always envisioned doing at Archbishop Wood — winning a Philadelphia Catholic League girls soccer championship.

“I felt like I should,” Eckert said. “And always try to score.”

Eckert let loose a shot from the right side that found its way past the goalkeeper and inside the near post with 6:30 remaining in the first extra session, her second goal Saturday afternoon at Northeast High’s Charles Martin Stadium delivering the Viking a second straight league title with a 2-1 comeback win over Lansdale Catholic.

“It means everything,” Eckert said. “It’s been my dream since I joined Wood and since I was a little kid actually watching them play throughout. And it just means everything to me to score those two goals.” Archbishop Wood’s Sophia Topakas (34, left) and Paige Eckert (29) celebrate after Eckert’s goal pulled the Vikings even 1-1 in the second half against Lansdale Catholic in the Philadelphia Catholic League final on Saturday, Oct. 29, 2022 at Northeast High School. (Mike Cabrey/MediaNews Group)

LC took a 1-0 lead with exactly 26 minutes remaining in regulation as a shot by Megan Steinbach escaped the keeper’s grasp and just got over the goal line.

“Huge game right – two goals,” said Archbishop Wood coach Tom DeGeorge of Eckert. “That’s not easy to do cause I thought she missed a couple good opportunities early and usually if you’re not mature or you’re a freshman it gets in your head. She steps up and scores two goals – that says a lot.”

Eckert scored the winner halfway through the match’s 89th minute. As Wood pressured along the right side, Ava DeGeorge tapping a pass forward to the freshman, who ripped a shot inside the near post.

“It was crazy,” Eckert said. “I just got the ball from Ava, looked up and hit it right near the post and it went in. And that was just the craziest thing that’s ever happened. Definitely the biggest goal of my career.”

Eckert’s goal sealed a perfect defense of the PCL crown for the Vikings, who went 10-0-0 against league competition – winning all eight regular-season games to earn the top seed in the playoffs where it bested Conwell-Egan Tuesday in the semifinals then LC Saturday in the final.

“This group of girls this year is amazing,” Wood senior Giulia Nevrotski said. “We’re all close, we all wanted the same thing, that was our goal by the end of the season and going undefeated just feels great cause that’s what we wanted overall.”

Wood has won its last 16 games against PCL sides and is 19-0-1 in the league the past two seasons. The Vikings are the first repeat Catholic League champs since Archbishop Ryan won four straight from 2012-2015.

“When I meet these kids, everybody wants to win a PCL and everyone wants to go on a state run,” Tom DeGeorge said. “Two in a row’s great, you got these little young kids that are nuts already talking about three in a row. It’s one step at a time and this league is so tough, really tough.” Second-seeded Lansdale Catholic (12-5-1), which fell 1-0 to Wood in their first meeting this year Oct. 6, was looking to win its first Catholic League championship since 2018. The Vikings have ended LC’s last three tournament runs, previously besting the Crusaders in the semis in 2019 and 2021, the later in overtime.

“They’re a good team, they’re a good opponent,” said Steinbach of Wood. “We’ve always kind of been neck-and-neck with them so yeah it’s just unfortunate.”

Both teams’ seasons continue with scheduled District 12 finals, LC Wednesday in Class 2A and Archbishop Wood in 3A Thursday. Both games are set to be played at Ukrainian American Sport Center in Horsham Township.

“We definitely played the full 80 minutes and them getting their goal to go to overtime was definitely not what we planned on but we really did give it our all and I’m really proud of our team,” said Steinbach, who has verbally committed to Rhode Island. “Making it this far for my senior year I’ve never made the PCL finals so it was definitely something that we’ve accomplished and something to be proud of.” Lansdale Catholic’s Bella Wach (16, left) and Megan Steinbach (5) celebrates after Steinbach’s goal gave the Crusaders a 1-0 lead in the second half against Archbishop Wood in the Philadelphia Catholic League final on Saturday, Oct. 29, 2022 at Northeast High School. (Mike Cabrey/Medi

The Crusaders had the momentum in the early minutes Monday but Wood withstood the pressure and settled in with the first half ending with neither side finding a goal.

Steinbach finally broke through to put the Crusaders up 1-0 at 24:00, driving through the Wood defense and getting space for a left-footed shot that was initially blocked by goalie Lauren Greer at the left post but the ball trickled past her and just over the goal line.

“I think went over the line right through her legs, she tried to bring it back,” Steinbach said. “I know it was in.” Lansdale Catholic pushed to double their advantage but had a ball sent on goal on a corner saved by Greer with Wood’s keeper also denying a shot from Steinbach.

The Crusaders kept the lead until the 75th minute when they could not clear a ball from their box and Eckert got her foot to it in a crowd, knocking it into the net to pull the Vikings level.

“I just remember it bouncing around the box and Coach DeGeorge always says that when it’s like that someone has to be willing to put it in the back of the net,” Eckert said. “And we were down, a couple minutes left, trying to move on and win the PCL and put my foot through it and it went in.” In overtime, the Vikings’ Sophia Topakas had a quality chance in front of the net but sent her shot at LC keeper Cassidy Saulino for a save. But a goal came later in the first 15-minute extra period, Eckert’s tally off an Ava DeGeorge feed starting the Wood’s back-to-back title celebration.

“It just feels amazing,” Nevrotski said. “When we went down there was still plenty of time left, I still had hope, I knew we were going to score. It was coming, we were being patient. Tom (DeGeorge) always says to be patient, that’s what we do, we’re patient and we pass the ball, move the ball around in the back and we scored. And then I knew it was coming after that.”