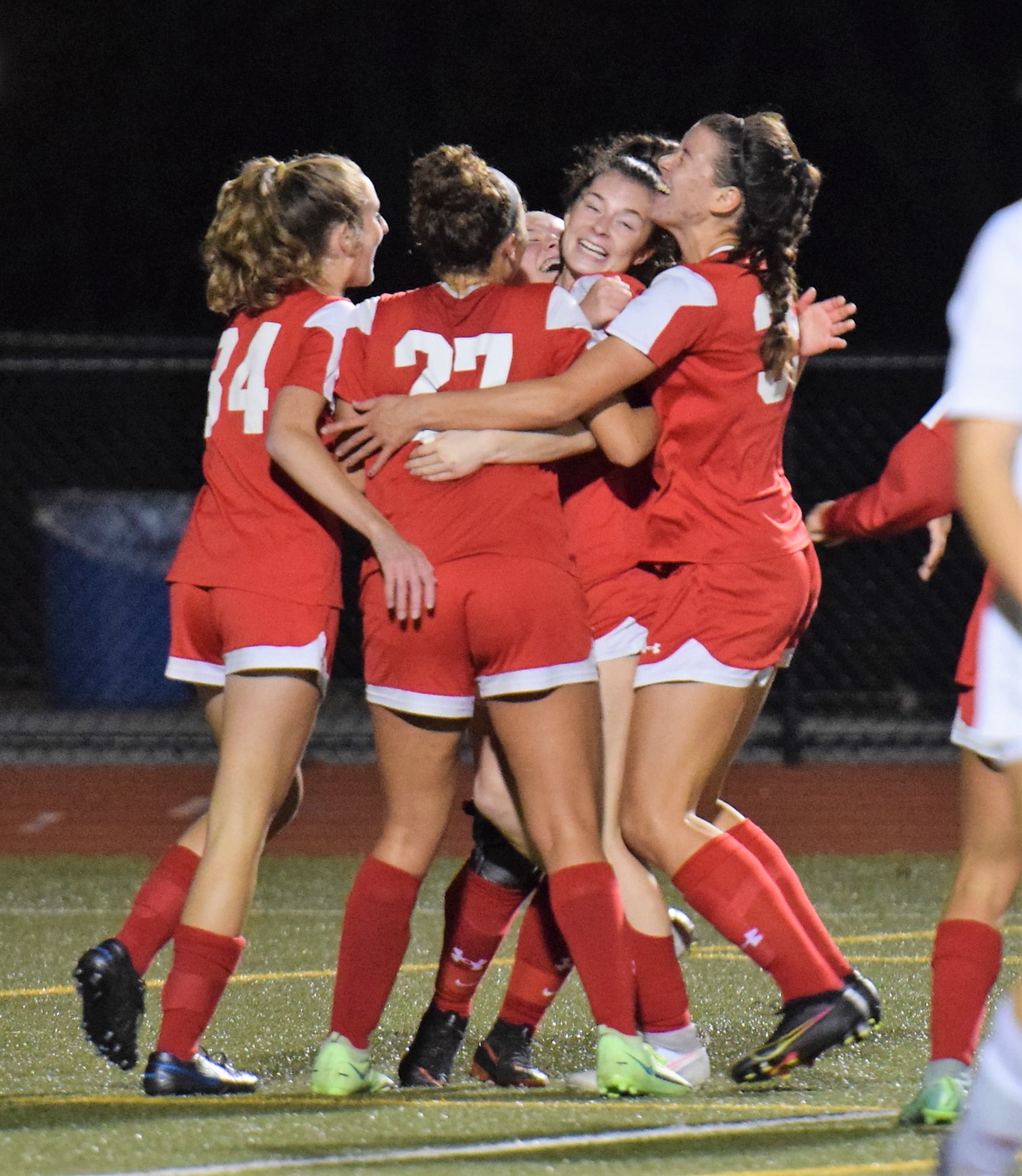 BUCKTOWN >> For most of the season, Colby Wasson and Sabrina Marks were forced into the cheering section for the Owen J. Roberts girls soccer team.

Injuries held junior goalkeeper Wasson and sophomore midfielder Marks out of the lineup for a large chunk of time, but now they’re back and they’re the ones generating cheers.

Marks scored a much-needed first half goal, junior Alexa Vogelman doubled the lead in the second half and Wasson and the Wildcats defense were impenetrable in a 2-0 takedown of District 3 runner-up Wilson in a PIAA Class 4A first round match Tuesday at Wildcat Stadium.

The District 1 runner-up Wildcats (22-2-1) were back to their best in a one-sided performance that earned them a second round matchup with District 7 champion Moon (a 1-0 winner over Ephrata Tuesday) on Saturday at a site and time to be determined.

A well earned win by the Wildcats on goals by Sabrina Marks and Alexa Vogelman pic.twitter.com/S9ZbQaeV9k Wilson, the BCIAA champions, finished the season 22-3-1, a hugely successful season but one that ended with back-to-back setbacks after losing the District 3 final to Central Dauphin last Saturday.

OJR was rewarded for being in the ascendancy with five minutes until halftime when Vogelman picked up the ball well beyond midfield, made a charging run 55 yards down the right side and got toward the end line where she fired a near-post shot that was saved by Wilson goalkeeper Alexis Solt (9 saves), but the rebound was hit home by Marks for the 1-0 lead.

The undersized high-energy middie suffered a sprained MCL in the regular season against Spring-Ford on Sept. 23 and was expected out 8-10 weeks. She came back in seven and has helped the balance of the OJR midfield three alongside Gabbi Koury and Olivia Thompson.

“It was exciting when I was finally cleared and being able to play and be a part of it rather than to keep sitting on the bench where all I could do is cheer them on,” Marks said.

Having played all nip-and-tuck contests that didn’t get a goal until the late stages or overtime in districts, an early goal was a huge boost to OJR.

“We’ve needed a goal in the first half the past four games. Now we finally got it,” Marks said.

“Oh, I love when that happens!” Wasson said. “A goal in the first half just calms me, we’re in a groove, we’ve got it and we’re not looking at the possibility of overtime. It gives our team momentum.”

Wilson was forced into difficult personnel changes on the fly when senior holding midfielder Jordan Lasky suffered a head injury and did not return, and center back Kylie Dries suffered a bloody nose. The Bulldogs were unsettled trying to simultaneously sort their own lineup while being beared down on by a hungry opponent.

“Their athleticism was a big factor,” said Wilson head coach Tim Fick. “We lost Jordan Lasky in the first half and that’s one position we don’t have a lot of depth. She does such a phenomenal job for us all year in a position that is the engine. So we were scrambling from that point on.

“We had some chances in the second half, but it’s Owen J. and you know you have to play 80 minutes. The first half we had a lull, and they don’t have lulls.”

Goalkeeper Wasson (3 saves) suffered a broken leg right at the start of the year and returned for the second of the District 1 playoffs against Avon Grove on Oct. 30.

She’s conceded just one goal, the dubious overtime goal by Downingtown East in the District 1 title game, since returning.

“I was itching to get back. I thought it was torturous sitting on the sideline and watching,” Wasson said. “Finally getting back has been great. I was definitely nervous, but getting back and playing is exactly what I was looking forward to.”

After excruciatingly close games their previous four outings, a more comfortable win – once Vogelman’s right-footed 20-yard blast found the net with 16:52 to play – was welcomed.

“It was definitely nerve-wracking (through districts), but my trust in my defense is so high that it felt like we could handle anything, that nothing could stop us and we can push through,” Wasson said.

“It’s unfortunate. It was a really great run by our group,” said Fick. “They’re a really neat senior group who have all played together all the way through. Really only two of them went to different clubs. … They’re a really neat group led by Nat and Liz (La Salle) and Alexis, they’ve got bright futures playing in college.”

While Wilson’s time is up, players like Wasson and Marks are trying to make up for lost time for as long as the ride lasts.

“We were all there through preseason working so hard. Then when you’re injured you’re still seeing your team work so hard and winning those games when you’re out,” Wasson said. “To see it paying off and be here now really feels great.”

Under pressure: Pennridge speeds past Parkland in PIAA-4A first round
Archbishop Wood’s season comes to a close against Central Columbia in PIAA-2A quarterfinals