Downingtown East wins District 1-4A championship over OJR in OT 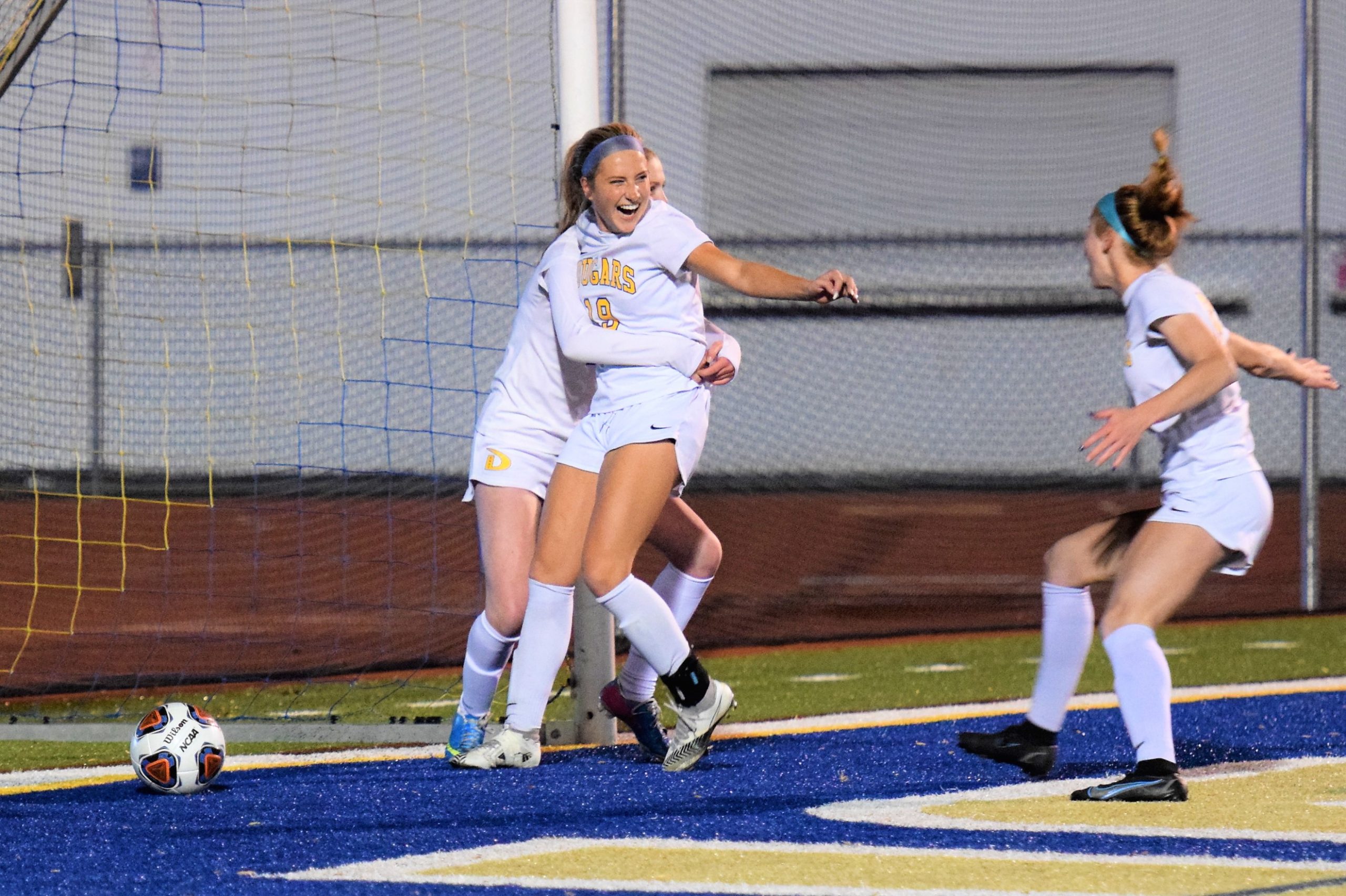 ROYERSFORD >> The Downingtown East girls soccer team was not so far above .500, barely in the District 1 playoff picture and the thought of playing in a district final was funny at best.

After enduring a losing patch, East faced what appeared to be a troublesome Saturday morning trip to undefeated Owen J. Roberts on Oct. 8.

“We had a bit of a lull midseason and we lost three games in (9 days),” said senior center back Nicole Prendergast. “We were at 21st place at that point (in the district rankings). It was actually the game against Owen J. that we picked back up.”

Their first meeting picked the Cougars up.

Their second meeting with OJR also entailed the Cougars picking up … a District 1 championship trophy.

Junior Lauren Reimold scored the wide-open rebound of senior forward Caroline McDonald’s thunderous free kick from 27 yards with 32 seconds remaining in the first overtime to deliver No. 4 seed Downingtown East a 1-0 overtime victory over No. 2 Owen J. Roberts in the District 1 Class 4A championship game Saturday at Spring-Ford.

“It’s surreal,” said McDonald. “This team has overcome injuries, you name it. We’ve had some losses, we’ve had to come from behind, overtimes, penalty kicks, penalty misses, we’ve faced it all. To be able to come out on top is the best thing in the world.”

Downingtown East (18-3-1) won all four district games by one-goal margins and is riding a 13-game winning streak. As District 1 champions, the Cougars will face the District 3 third-place team in the first round of the PIAA Championships on Tuesday.

“Once we started to get some wins in a row we found our groove,” Prendergast said. “We worked through our injuries, figured out how to play with injuries and people down. We realized this is what we were capable of and that we could beat good teams.”

Owen J. Roberts dropped to 21-2-1 – its only previous loss was to Downingtown East, 2-1, on Oct. 8 – and will enter the PIAA 4A Championships as the No. 2 seed from District 1. They’ll meet the runner-up from District 3, Wilson, which fell to Central Dauphin 2-1 in Saturday’s final.

It was the second straight OJR playoff game to end on a controversial goal. The Wildcats benefitted in a semifinal win over Conestoga Tuesday when there were valid questions over the winning goal fully crossing the goal-line.

OJR was on the other side of a refereeing decision in Saturday’s final due to Reimold being two yards offsides at the time of McDonald’s free kick.

“(Our players are) saying she was offsides,” said OJR coach Joe Margusity immediately after the game. “The referee didn’t call it so she wasn’t.”

Though disappointed with the result, the Wildcats weren’t with their performance.

“We had our chances. I think we created more chance than they did but we didn’t out finish them,” Margusity said. “But our story is just beginning. Last year the team really progressed, it just couldn’t get past Spring-Ford those last two games. I think this year they’ve found ways to win. Yeah, this is an unfortunate loss and the way we lost by giving up that set piece but we can certainly look back on the chances that we created and know that if we play this type of soccer, the soccer gods have a way of evening things out.”

The key contribution from McDonald came after she bounced back from a big missed opportunity in the 77th minute thanks in part to a pep talk from Prendergast at the end of regulation.

East’s winning moment, its first district title since 2009, came after OJR was the stronger team in the second half and overtime, an attack led by Alexa Vogelman and Avery White. OJR led the match in corners 5-2 and shots on goal 10-6.

But East goalkeeper Lillian Matte was mistake-free in a 10-save shutout, including her best when she tipped a Vogelman effort off the bar and out for a corner early in OT. Prendergast had a save off the goal-line on a White chip and the rest of the Cougars defense that includes Bailey Horvath, Gabriella Kobell and Molly Walsh stood strong along with key midfield play from Reimold, Taylor Coulter and Karly Murlless.

Downingtown East had its run of three straight Ches-Mont championships ended this fall, so it just had to cast a wider net on what it could be champion of.

“In the past we’ve won the league and this year we didn’t,” McDonald said. “It made us take a step back, but since then we’ve taken it one game at a time and nothing’s changed. We have not looked ahead, past any team, focused on one at a time and it’s been working for us.”

Even with the District 1 trophy in hand, the Cougars weren’t full of ego; instead they felt full of the more important thing that decides matches.

“Our heart,” McDonald said of the match’s determining factor. “We’re not the most skillful, the most technical team, we’re never the most aggressive, but it came down to who wanted it more and this team has passion and heart from every player on the field and on the bench.”