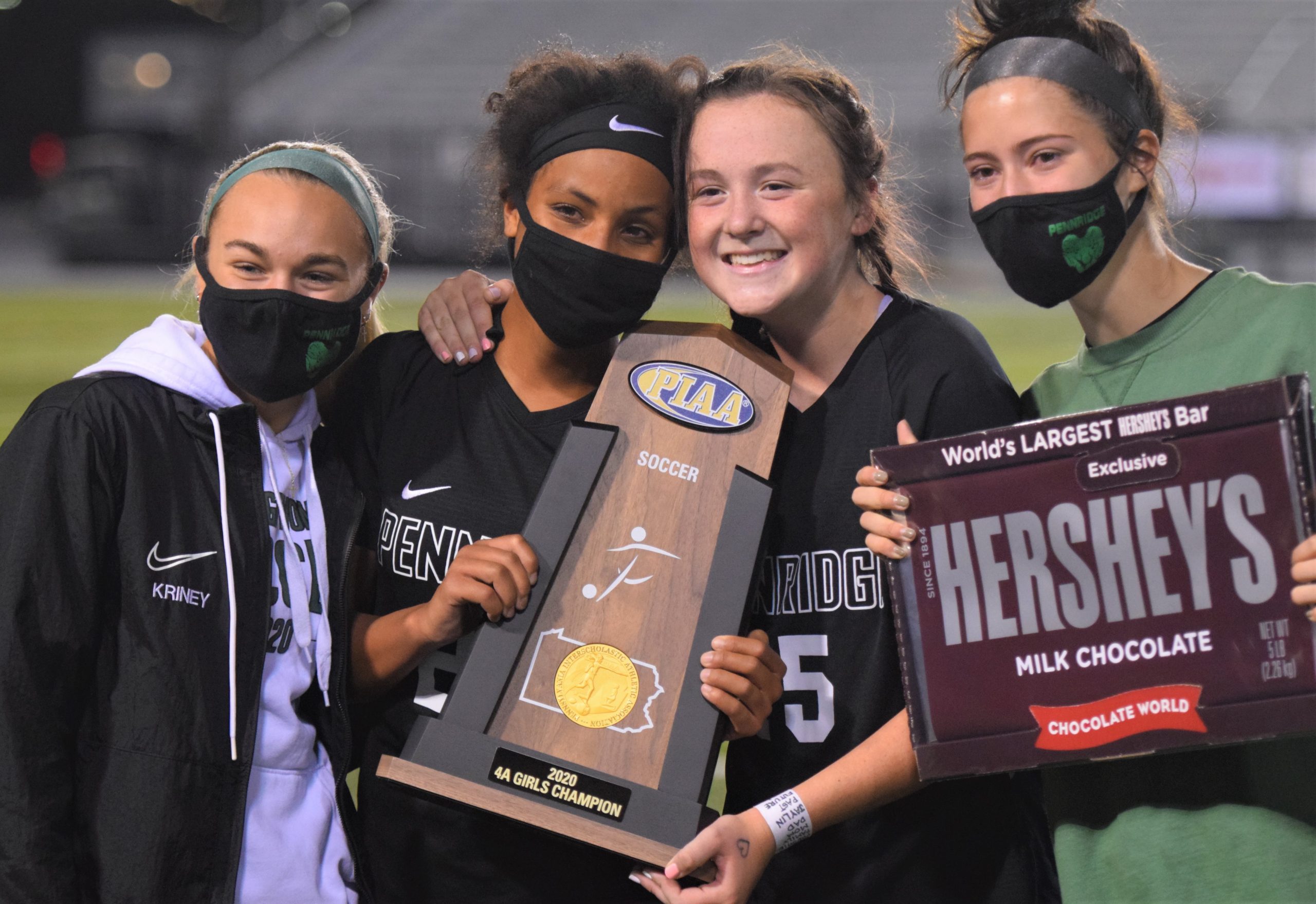 Maddie, a co-captain on the Pennridge girls soccer team, spent most of her senior season sidelined while rehabbing an injury while Tori, a freshman, went from reserve to starter as the Rams chased a state title. Saturday in Hershey, a pass from Tori sent Leah Malone in for a goal that made sure Maddie ended her career as a state champion.

While the fall played out very different for each, the sisters played a big part in getting each other through it as state champions.

“I couldn’t play this season, so I was kind of living it through her,” Maddie said, with Tori standing right next to her at HersheyPark Stadium. “We write the people’s names we play for on our wrist before every game and I always write hers on mine. It’s inspiring to watch her coming in as a freshman to a program where there’s a lot of success but also a lot of pressure put on you.”

In January, Maddie tore the ACL in her right knee, leaving her sidelined for all but a ceremonial appearance this fall. On the team’s Senior Night, she took the opening tap from her younger sister, then booted the ball out of bounds before exiting the field.

With the Rams making the state final, the timelines caught up and the senior was cleared the week prior to return to competition. On Saturday, for the first time this season, Maddie was a full participant in warm-ups, her right knee bracketed in a brace and ready to go in if the circumstances allowed it.

“I wanted to go in for a minute if possible,” Maddie said. “I got cleared for contact, but it’s still a long process before I can really play in a game again so I think I had a somewhat unrealistic hope to get in. With how things went, I knew it was best if I cheered my team on from the sidelines.”

A Youngstown State recruit, Maddie Angelo started as a sophomore and junior and was slated to be the team’s only returning defender prior to her injury. In 2018, she started the PIAA 4A final where Pennridge fell to Souderton in overtime, so the idea of getting on the field as a sort of redemption was a dream ending.

Understanding the risk of reinjury against a physical North Allegheny team outweighed the reward, the elder Angelo took her usual spot standing on the bench cheering her team on.

“Whenever I wouldn’t know what to do, she would help me through that,” Tori said. “If I felt down or wasn’t doing well in a game, she always assured me I had another game. She didn’t get to play at all, so I knew even if I played poorly, I had a chance to rebound and come back strong the next game.”

Tori ended her freshman season with four goals and had several monster playoff performances on the road to Hershey. The winger, who stepped into a starting spot when Emily Kriney was injured midway through the regular season, mixed speed and physical play in a package that was hard for teams to handle.

Her relentless pursuit of the ball against Pennsbury in the district quarterfinals was rewarded with a goal, while that same high-energy approach led to plenty of throw-ins, corners and chances for her team in the district final against Spring-Ford and state semis with Parkland.

“She gave me a lot of hope this season and let me live through her success,” Maddie said. “I can’t be on the field, I can’t make a difference in that way so I had to find another way to make that difference.”

“My sister is on the team and a lot of my friends are on the team, so I could always play for them,” Tori said. “They’re always keeping my spirits up and helping me through the game. The bond between us keeps the game alive.”

In the state final, Tori’s pressure helped the Rams win their first PIAA title. It was her sharp diagonal pass that found Leah Malone for the eventual game-winner in double overtime.

Few players were having more fun postgame than Maddie Angelo. The senior was in plenty of photos, posing with the trophy, the giant chocolate bar, her sister and other teammates. While the final game she played in, last year’s state semifinal loss to Conestoga, left a disappointing feeling, this last game ended right, even if she didn’t get that chance to step on the field.

“I was really down on myself at the beginning of the season but seeing what these girls did for each other and being able to be a part of the whole thing in my senior year, it’s a really great way to go out,” Maddie said. “I’m never going to forget this season.”