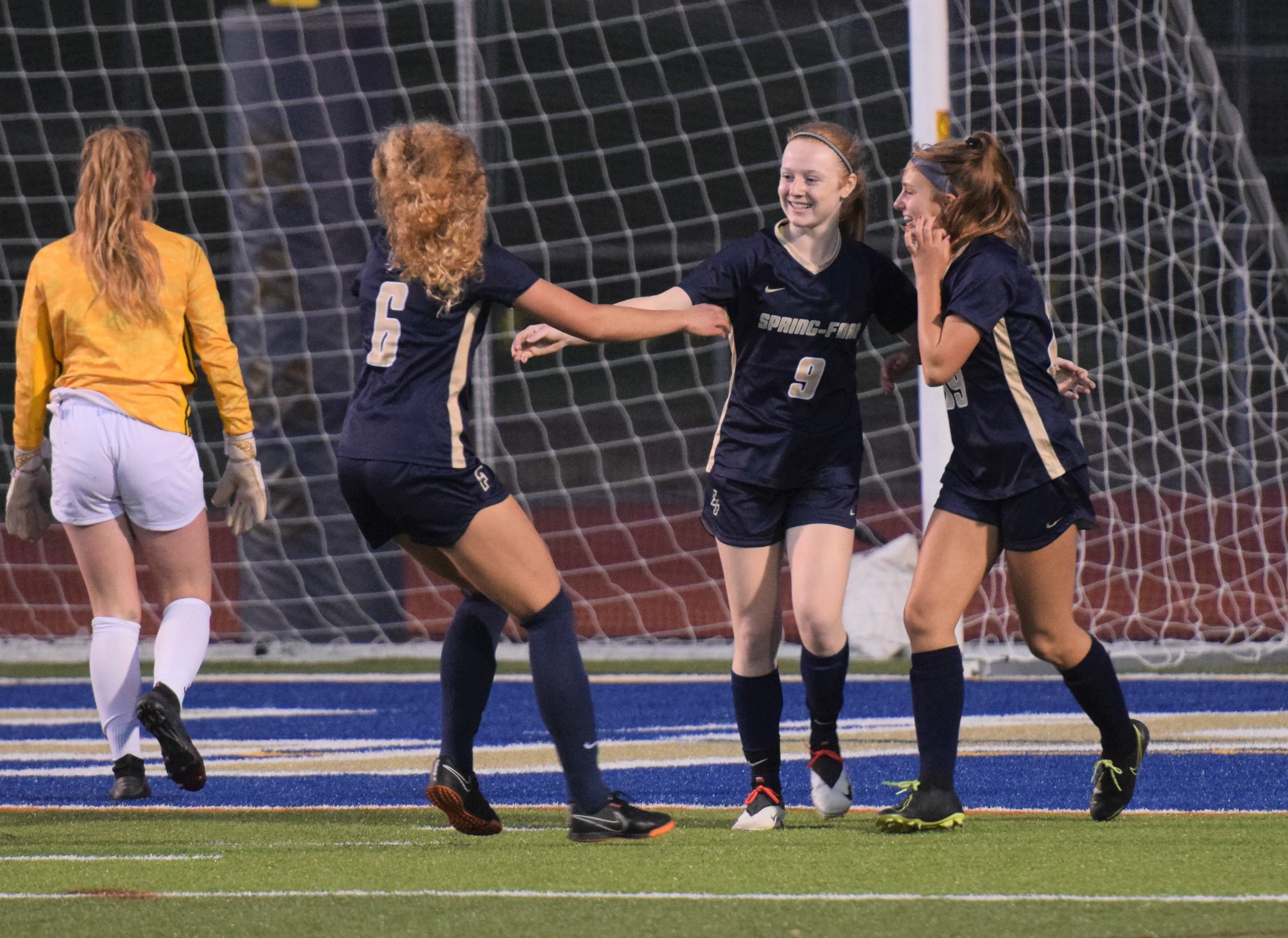 With each day of waiting – through the COVID-19 pandemic-delayed start to the season, through the postponement of their first game and a 24-hour rain delay of their second – the Rams were like a balloon of anticipation expanding and expanding.

Wednesday night, the burst occurred and it was truly explosive.

In a rematch of the 2019 Pioneer Athletic Conference championship game, Spring-Ford reversed the result and then some with a six-goal smashing of defending PIAA Class 4A champion Boyertown, 6-0 at Coach McNelly Stadium.

“Absolutely fantastic,” McVey said of the feeling being back to match play. “For the past couple weeks we’ve just been doing intrasquad things so if feels so good to play against a tough opponent and really come out as as team and perform.”

Spring-Ford (1-0) was irresistible while outshooting Boyertown 14-2 and dominating the game start to finish thanks to its technical ability, pace and counterpressing that the Bears couldn’t cope with.

“I don’t remember the last time we lost a game by that many goals. It’s been a long, long time,” said Boyertown 21st-year head coach Bill Goddard.

“You look at the quality of their team, you have to give them a lot of credit. They have an awful lot of talent; we don’t have that kind of talent. So it was a good learning lesson for our kids. It’s disappointing.”

A lot has changed since the two teams met last October when Boyertown was the bursting team, hanging a 3-0 victory on the Rams and riding the wave to a state championship. Many of the key figures of the PIAA run have departed, including 2019 Mercury All-Area Player of Year Camilla Kuever (returned to Germany following exchange program), goalkeeper Madison Gallagher (Navy) and defenders Morgan Kline (Penn State-Berks) and Emma Elwell (Millersville).

Leading scorer Samantha Goffice is back for her senior year and while the forward opened her campaign with three goals in last Saturday’s 4-1 win over Pottsgrove, she was forced back to support the midfield Wednesday after an intriguing matchup with Spring-Ford junior center back Liv Curry, a Wisconsin commit. The Bears were without returning All-Area first team center back Mikayla Moyer in Wednesday’s game.

Spring-Ford meanwhile returned all but one of its top players and got a jolt from the introduction of three former Academy players, Curry, junior midfielder Reese Kershner and sophomore defender Maddie O’Donnell, and the entrance of new head coach Tim Raub.

“The new players, Liv, Reese, Mo and everyone that we’ve added this year has really brought a new burst of energy,” McVey said. “The new coaching staff, Coach Raub and Coach Rooney, they want to win, they want us to win and are great motivators. They really, really have energized this team.”

Raub, who started his coaching career in the PAC under Goddard at Boyertown, joins Spring-Ford following a six-year stint (2013-18) at Phoenixville alongside accomplished assistant Rob Rooney.

For Curry, the sister of 2020 graduate and All-Area first teamer Ella Curry (UMass), it’s been a pleasant entry into high school soccer after playing her first two years with the Penn Fusion Academy team.

“Everyone on the team has been so welcoming,” she said. “I feel like we all have the same mentality and work ethic that it was just so easy to come into.

“We’ve put in so much work, today and all throughout the preseason. I know that there are new additions but I feel like we all worked really well together.”

With student-athletes involved in online schooling instead of in person, the time together in soccer is a welcome dose of normalcy.

“It’s really strange. You’re sitting and facing a wall the whole day and the only time we get out of the house is for practice,” Curry said. “That especially keeps us motivated because this is our one time to get out and keep our season going as long as we can.”

Thomas pressed and stole the ball from a Bears defender and played in McVey for the opening score just four minutes in. Nineteen minutes later Flanegin got on the end of a long free kick from senior defender Caitlin Norwood, took a touch off her face and popped the ball over the Boyertown keeper for the 2-0 lead. Junior Claire Lanzisera rattled the crossbar minutes later and the Rams built again with Thomas again creating for McVey with a long through ball between the center backs for a 3-0 lead at the break.

Less than seven minutes into the second half, Spring-Ford cashed in again with a great team goal as Flanegin carried a mazy run from the S-F defensive half that led to McVey picking up a rebound near the end line and playing back to Thomas for the shot and 4-0 lead. With 10 minutes to play, the Rams scored twice in a three-minute span from Flanegin on a shot from distance and Higgins, who was assisted by Kamryn Pufko.
Spring-Ford goalkeeper Riley Wallace made two saves for the shutout.

“In training we’ve all been saying this is our year, this is our game and we just came out and seized the opportunity,” McVey said. “We worked together, we moved the ball, and the best thing about the score was how spread out it was.”

One night in at least, the wait was worth it.