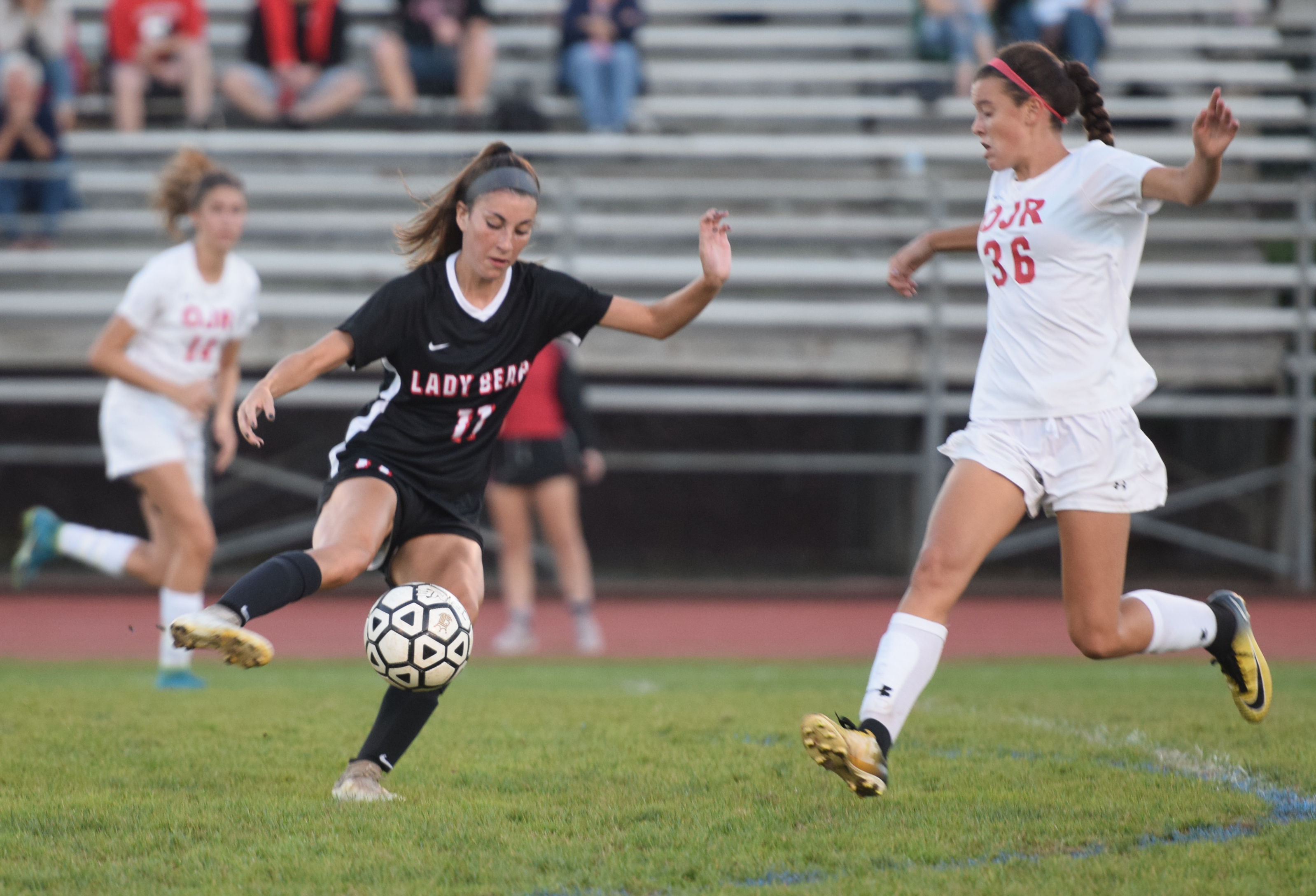 Outlook: Last fall was a dream for the Boyertown girls soccer program. Everything fell into place in veteran coach Bill Goddard’s 20th season in charge as the Bears put together a season you couldn’t script that ended with them raising the trophy in Hershey. Most of the leaders of the state champions have departed – exchange student Camilla Kuever, the Mercury All-Area Player of the Year, returned to Germany – or graduated, namely All-Area first team goalkeeper Madison Gallagher and first team midfielder Maddi Monka. A pair of All-Area first teamers are back for their senior seasons, forward Samantha Goffice and defender Mikayla Moyer. Goffice led the Bears in scoring a year ago with 25 goals and 13 assists while Moyer, a center back, scored the overtime game-winner in the state final. All-Area honorable mentions Courtney Actis, a senior outside back, and Sam Devlin, a sophomore forward, were also key pieces on last year’s run. “The biggest thing we’re trying to impress upon the girls is to not get caught in the comparison trap to last year. This is a brand new cast of characters, different personalities. They have to try to put their own stamp on things,” coach Bill Goddard said. Though last fall will be nearly impossible to replicate, Boyertown always contends in the PAC and for state placement and that shouldn’t change, especially with the area’s best goalscorer Goffice still leading the line.

Outlook: With a high number of returning players and a solid blend of upperclassmen, Daniel Boone is pushing to get on the right side of .500 and contending for the Berks II championship. Their main competition will be Conrad Weiser, a PIAA 3A qualifier in 2019, and Fleetwood, while Twin Valley and Muhlenberg also feature in a new-look Berks II after Berks planned to shift to four divisions prior to the pandemic. (Berks I includes only Exeter, Gov. Mifflin and Wilson).

Outlook: Team unity is high around the Warriors this fall, banded together by the circumstances around the pandemic. “They realize that this could all come to an end at any time, so they really are enjoying each day we’ve been together. I actually find myself almost having to kick them out after practice, because nobody is in a rush to leave,” coach Bret Smith said. “I’m hoping that positivity and chemistry translates to on field success.” Their chemistry isn’t newly formed with many returning starters, including multi-year starters on defense like Jess Lineen (All-Area second team), Ruby Murray and Lizzie McNichol (both All-Area HM). Scoring hasn’t come easy for Methacton in recent years so keeping matches tight will again be a priority. “Not sure what to expect in such a unique and challenging season, but as always, we remain hopeful of challenging for a spot in the district playoffs for the first time since 2012,” Smith said.

Outlook: The OJR girls soccer team should have been nicknamed ‘WildKittens’ last year, something to indicate the team fielding a starting lineup with six underclassmen. Talented but raw, the OJR results followed in kind with qualification to districts but more than a couple stinging close losses. “We weren’t ready to win last year. When you have such a freshman-oriented team you often find ways to lose,” coach Joe Margusity said. The blend appears better this fall with its three captains – seniors Sarah Kopec and Emily Sands and junior two-time All-Area first team defender Mo Weaver – leading the cause. “I’ve got three quality leaders in Mo, Emily and Sarah. They have been extraordinary during this whole summer,” Margusity said. Alexa Vogelman scored 17 goals as a freshman and should impress up top alongside fellow sophomore Olivia Thompson. You can expect a step forward from OJR compared to last season. Time will tell if they have enough to be PAC champion. … OJR encountered a COVID-related shutdown for a week after a player’s parent tested positive. The Wildcats’ first contest is now set for Oct. 2.

Outlook: Coach Kim Paulus is excited about the potential of this fall’s Vikings, calling it her ‘most balanced team’ in her 16 years. Perk Valley will need to maintain that positivity through a team quarantine after a player tested positive for COVID-19 and forced a team shutdown on Sept. 17 for at least one week. When the Vikings do begin play, All-Area honorable mention goalkeeper Riley Hill and midfielder Madelyn Zielke, along with senior defender Mackenzie Patla will be leading the way as captains. “It’s the most balanced team we’ve ever had with fantastic leaders. They came in super fit with a strong mentality,” Paulus said. “We had a rough start last year so it’s nice to see they’ve learned those lessons and developed a strong mindset to be ready to take on a season that is going to be throwing us curveballs left and right.”

Pottsgrove’s Avery Makoid gets a boot in before Villa Joseph Marie’s Kennedy Kilchrist (12) can get her shot off during a District 1-3A semifinal. (Austin Hertzog – MediaNews Group)

Outlook: Last fall was the finest season in Falcons’ program history with 16 wins, a district playoff win and trip to the District 1-3A semifinals. They can take heart knowing most of the complimentary pieces of that team are returning. The graduation of two All-Area first team players, forward Skylar Glass and defender Becca Delp, will be felt so the players with big-game experience will be needed to take on bigger roles, notably All-Area returnees Hailey Strain, Lexi Zook, Emily Vishio and Avery Makoid. “We have talented players returning who have played in many big games over the past 3 years,” coach Steve Mellor said. “They will need to guide us through the tough moments and keep us focused to be successful.” Pottsgrove is not going undefeated in its division a third straight year in a concentrated and top-heavy 7-team Pioneer Athletic Conference, but that’s not to say it won’t earn its share of wins. The Falcons will and should be capable of more postseason wins if circumstances allow during this uncertain fall.

Outlook: After an era from 2013-17 where reaching the PIAA tournament was the norm for the Spring-Ford girls soccer team, the Rams lost a bit of the magic the last two seasons. Don’t be mistaken, Spring-Ford still had excellent records and were PAC finalists, something most programs would beg for. Former Phoenixville coach Tim Raub has entered into the picture as head coach of Spring-Ford and will hope to regain that magic. The roster certainly has the makings of it. Returning are senior midfielders Hope Flanegin (All-Area first team, Lehigh commit) and Molly Thomas (AA second team, East Carolina commit), four-year starting goalkeeper Riley Wallace (Carnegie Mellon commit) and fellow All-Area honorable mentions Caitlin Norwood and Emily Higgins. Reinforcements are arriving too with three former Penn Fusion Academy players returning to school soccer in Liv Curry (Wisconsin commit), Reese Kershner, and Mo O’Donnell. The Rams have the most talented roster in the area, but have a higher degree of difficulty with a new coaching staff and many new additions figuring into the rotation. “There is a lot of promise on the team, but as is the common theme this year, we don’t know what the season is going to look like,” Raub said. “At this point, it is just a matter of determining whether we can put all the pieces together quick enough to be able to compete in the league. Our goal is to play well enough to compete for a league title and put ourselves in a position to make a strong postseason run. Hopefully, things outside our control will allow that to happen.” As much as any team, Spring-Ford will hope for good health for all because it has the potential for a significant postseason push.

Boyertown’s Courtney Actis (2) is fouled by Upper Perkiomen’s Kyra Lesko while competing for the ball during a PAC semifinal. (Austin Hertzog – MediaNews Group)

Outlook: Upper Perk showed signs of progress a year ago by qualifying for the PAC and District 1 playoffs, the first time reaching both in the same season since 2013. Top returners include All-Area second team midfielder Bryanna Marinari and honorable mentions Lauren Powers, Sam Kozminski and Kyra Lesko. With 11 returning players who featured (including all four starting midfielders) and only three lost to graduation, UP can build on that progress. All-Area second team goalkeeper Hannah Landis graduated, but Upper Perk benefits from the arrival of former academy goalkeeper Gabriella Neal, a junior. The difficulty is raised while being one of only two (Pottsgrove) from the traditional small-school Frontier Division playing in this fall’s 7-team Pioneer Athletic Conference. Challenging for the PAC title by going through Boyertown, Owen J. Roberts and Spring-Ford feels like a big ask, but the Tribe will be battle-tested like never before if district playoffs are in the cards. “Assuming we get to a point, playing a tougher than usual schedule should definitely have us prepared to be competitive in district playoffs against schools our own size,” coach Mike Freed said.