Pennridge pulls away from Wilson in 2nd half, advances to PIAA-4A quarterfinals 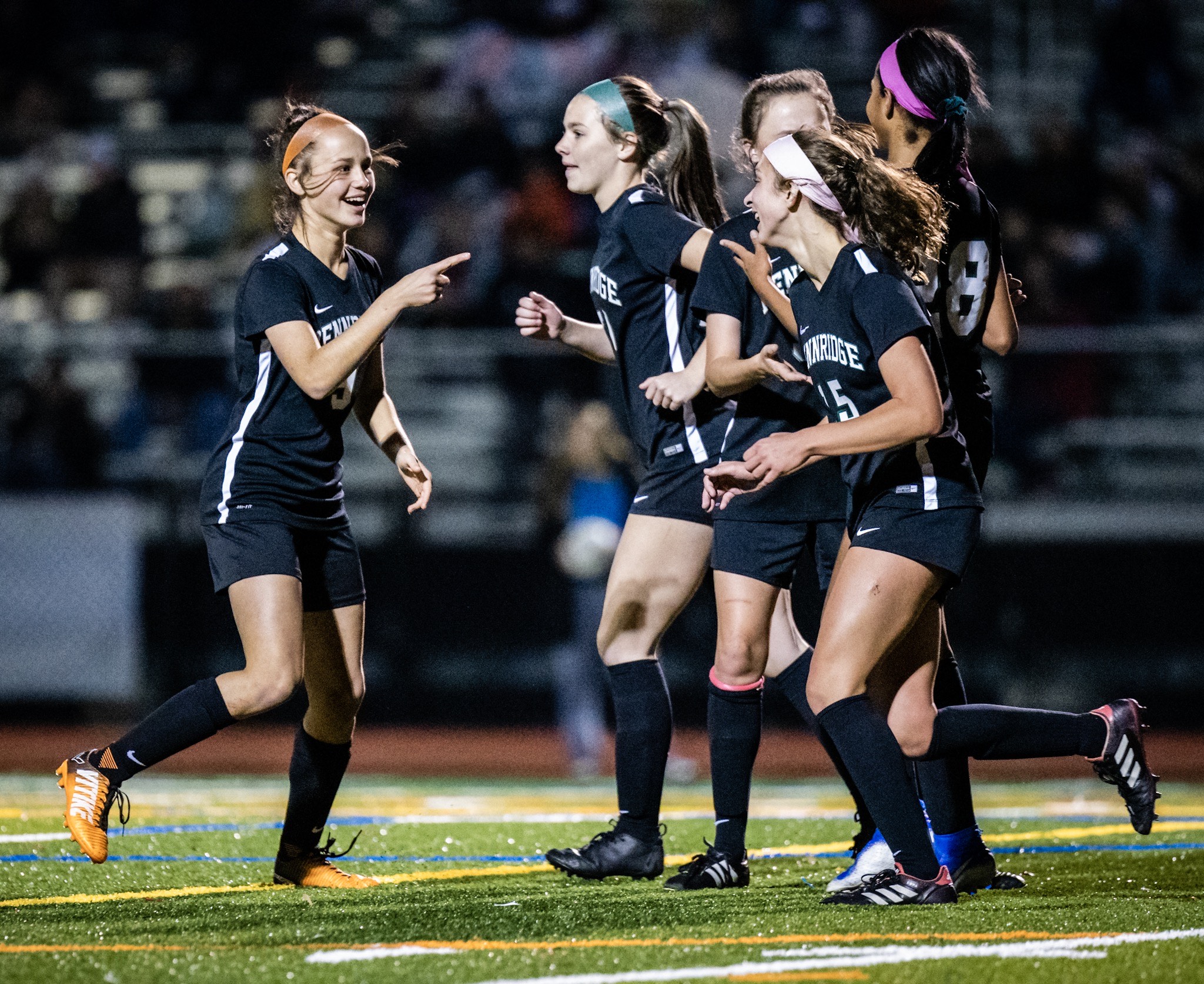 FRANCONIA >> Maddie Anderson remembered the last time she took a free kick from an opportune position.

“In the last Boyertown game I had a kick the same exact spot, it ended up hitting someone in the face,” the Pennridge senior midfielder said. “It didn’t even make it into the box.”

Tuesday night in a scoreless PIAA Class 4A girls soccer first-round contest with Wilson-West Lawn early in the second half, she did much better than her effort in the district final. From 20 yards out, Anderson ripped a free kick over the Bulldogs wall, out of a reach of goalkeeper Alexis Solt and into the top of the far left corner for a stellar opening goal.

“I had that thought, it’s either going upper 90 or someone’s going to get a head on it,” Anderson said. “So I think cause everyone was making a run into the box, I just had to place it where I thought it was going to be successful.”

Anderson’s strike at 36:13 alleviated some stress and from there Rams offense proceeded to break out, scoring three more times in pulling away from District 3 third-place side Wilson and advancing to the quarterfinals with a 4-1 victory at Souderton Area High School.

“Especially after Maddie’s goal, I feel that relieved some of the pressure,” Rams sophomore forward Leah Malone said. “Like OK, we got this, now let’s just capitalize on our other opportunities. So it was just important to put those away.”

Malone earned a penalty kick which Lindsey DeHaven converted to double the lead with 19:28 remaining while Malone added two more goals to push the margin to four as Pennridge (21-1-1) avoided the quick state exit of recent District 1 champs and reached the quarters for the second consecutive season and the third time in the past four years.

“At halftime we talked about making the most of our opportunities and I definitely think in the second half we made the most of our opportunities,” Rams coach Audrey Anderson said. “And we played a little bit stronger defensively, not letting them play through us. You know, it’s always great to play a team we’ve never played before, because you can kind of play a little bit more used to what you like to play. So when we play the same teams over and over again, you kind of have to change things up.

“But I thought in the second half, offensively we were dangerous and didn’t really gave them a lot defensively.”

Since PIAA went to four classes in 2016, no District 1 champ had gotten out of the Class 4A first round until Pennridge Tuesday night. The win earns the Rams a fourth matchup this season against North Penn Saturday at a site and time to be announced.

“Especially our seniors were really hoping we’d break the curse, that’s what we were calling it,” Malone said. “So coming out here and doing that really gives us a lot of confidence and I feel like that was something we’re really pushing for this game.”

Pennridge’s Leah Malone (28) makes an acrobatic play to take possession of the ball during the Rams’ PIAA-4A first round game against Wilson on Tuesday, Nov. 5, 2019. (James Beaver/For MediaNews Group)

North Penn, which rolled past District 4 champ Williamsport 5-0 at Loyalsock Township High School, handed Pennridge its lone loss of the season Oct. 17 while its their last meeting the Rams rallied past their SOL Continental Conference rival in the district semifinals Oct. 29.

Wilson (20-6), who reached states for the first time since 2013, avoided being shutout on Emily Magalotti’s goal with 7:15 left.

“It was a great going into halftime 0-0,” Bulldogs coach Tim Fick said. “Turns into a 40-minute game, anything can happen. It was a great free kick and then a penalty kick, so two goals not against the run of play, that’s a little deflating.”

Pennridge put their share of shots on goal in the first half with their best chances coming off corners — Maddie Anderson rising up for a header that went wide left while Riley Hepler volleyed a shot blocked at the right post.

The Rams finally broke through in the fourth minute in the second half after Emily Kriney was fouled just outside the right corner of the 18-yard box and Maddie Andersen delivered her well-placed free kick into the high into far corner.

“We practice those kind of set pieces a lot so I think just wanting to at least get into the box where there was an opportunity helped,” Maddie Anderson said.

Pennridge doubled its lead with just under 20 minutes to play as Malone was tripped up in the box to give the Rams the penalty kick. DeHaven stepped up and put a shot into the top right corner at 19:28.

“I have these feelings sometimes and I’m like if I go to this side I know it’s going to go in,” DeHaven said. “So I kind of just felt like if I were to go that side, it was going to go in.”

Wilson goalkeeper Alexis Solt (1) watches the ball fly into the net on Pennridge’s goal by Lindsay DeHaven (39) on a penalty kick during their PIAA-4A first round game on Tuesday, Nov. 5, 2019. (James Beaver/For MediaNews Group)

Malone scored twice in less than four minutes span to push the Rams’ advantage to 4-0. The sophomore first goal came at 10:09 as she received a pass from Chance Hendricks, took a turn to get some space from a Wilson defender then let go a left-footed shot that lofted over Solt and into the net.

“It was just to my feet and then I took a quick touch back and then turned and shot it,” Malone said. “All you can hope is for it to go in like that. You got to take those.”

Malone collected the brace by heading a ball in a 7:29. Just 14 seconds later Wilson made it 4-1 when a loose ball in the box was knocked in by Magalotti.

“They’re very athletic and they’re smart with the ball,” said Fick of Pennridge. “And we just couldn’t get our bearings at times. Seemed like they knew what they wanted to do with the ball and where they wanted to try to exploit us. And they did some good things with it but like I said our defense, our team defense was fantastic in that first half. If you’re down you got to push up and try and score and when we did that, unfortunately it didn’t come out the right end.”