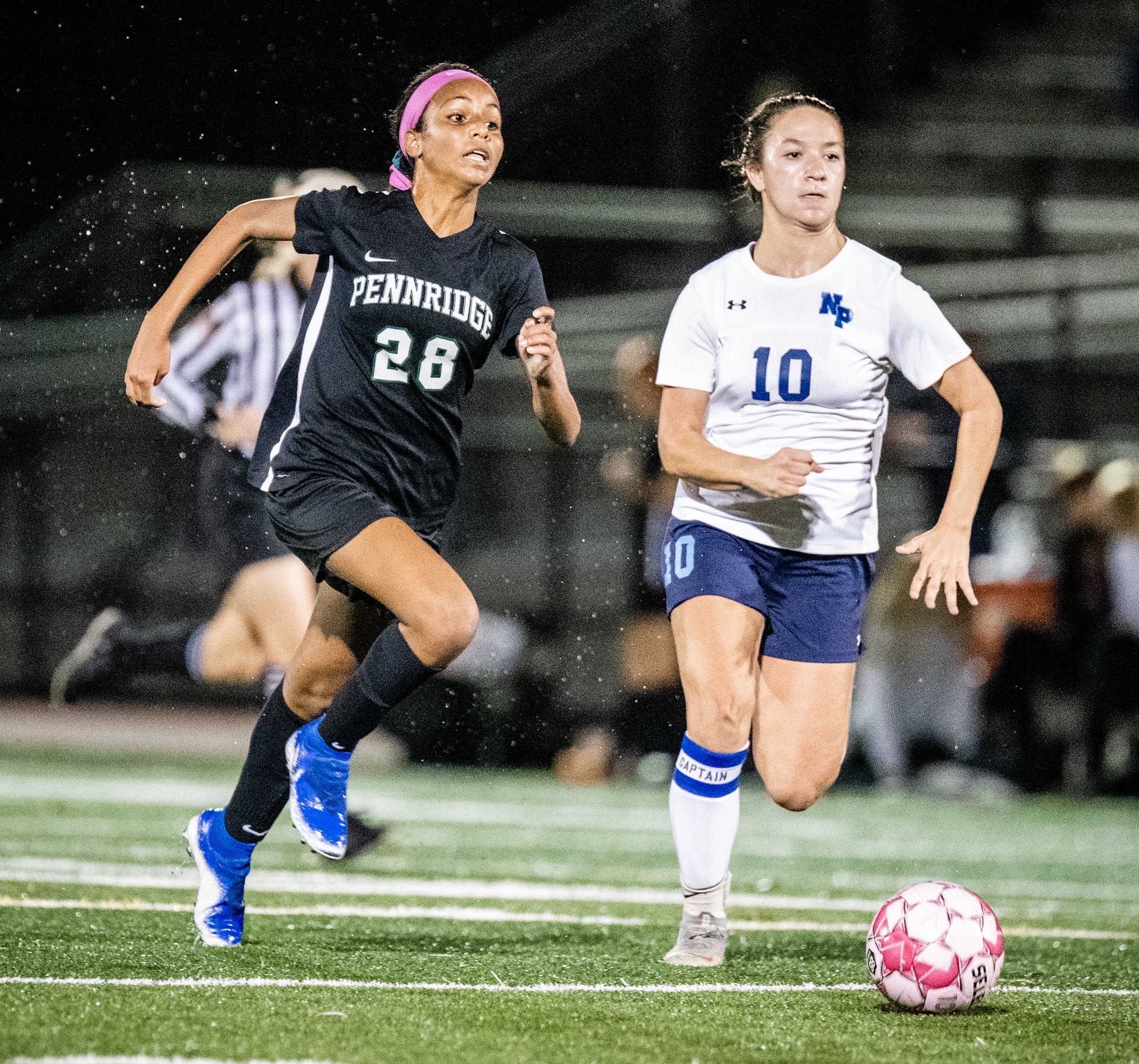 EAST ROCKHILL >> In soccer, the best forwards are relentless, fearless, inventive and attentive among other qualities.

It’s early in her career, but Pennridge sophomore Emily Kriney certainly checks all those boxes, an omni-present threat on the wing who led the Rams in scoring during the regular season. For a large part of Tuesday night’s District 1-4A semifinal against North Penn, Kriney wasn’t able to show those qualities and was a little off her game.

In the biggest moment of the match, Kriney displayed it all, blasting a shot from just outside the box on the right side to propel No. 1 seed Pennridge past No. 13 North Penn 2-1 in superb match.

“That’s probably one of the best goals I’ve had this season because it was a game-winner,” Kriney said. “It felt pretty good to score in a big game like this.”

Pennridges Kloey McIntyre (6) and North Penns Emily Varilla (9) compete for a headball during their the District 1-4A semifinal on Tuesday, Oct. 29, 2019. (James Beaver/For MediaNews Group)

The sides met for the third time this season in a quirky series that’s seen the home team win all three matches by an identitcal 2-1 margin. North Penn’s victory was the only loss the Rams (19-1-1) have on their ledger this fall and the Knights played with the confidence of a team aiming to do it again.

To that end, Liv Urban rang the crossbar five minutes into the game, another shot hit the post and the Knights were pushing the district’s top seed on their home pitch. Unbeaten in nine straight coming into Tuesday, North Penn carried its momentum from its end of season tear through the first 40 minutes and felt unlucky to not have tallied a goal at the break.

“I thought we played a fantastic game, we just lost it there for a few minutes and Pennridge is too good of a team where if you don’t play a full 80 minutes, they can put two goals in on you,” Knights co-head coach Mike Rio said. “I’m incredibly proud of the way the girls battled all season to get to this point. We hung with one of the best teams in the state and we feel we still have a lot of soccer to play.”

The Knights have already qualified for states and will travel to No. 3 Conestoga for a seeding game on Friday.

North Penn has an omnipresent threat of its own in sophomore Emily Varilla. The lightning-fast sophomore lives along the backline, pressuring defenders, hustling after passes along the back and always looking to take off on a well-timed run.

Varilla, who had scored two goals and drew two penalty kicks in the first three rounds, was shadowed all game by the Rams and mostly junior back Maddie Angelo. All she needs however, is one moment and Varilla got one with 15:52 left, rifling a shot off the right side that swerved its way into the goal.

“We worked hard and fought hard all game,” Rio said. “Third time seeing Pennridge, they know what we can do, we know what they can do. The way we came out, we have to be proud of how we battled tonight.”

Rams coach Audrey Anderson saw a response in her team after the North Penn goal, but quite the one she expected. As much as the Rams love playing on their home field, the team’s seniors were only interested in making Tuesday the last time they would get that chance.

Sensing that, the underclassmen rallied behind the cause. Pennridge went right back at the visitors, winning a corner kick with nine minutes to play. While that initial service didn’t pan out, it did get cleared for a second and the results of the team’s Monday practice came to fruition.

“We said from the beginning we don’t lose at home and we don’t lose on this field so when they scored, we knew we had to give it everything we had in the last 10 minutes to make sure we don’t give up anything on this field,” Angelo said. “It was the senior’s last game here, so we played for something more.”

“It’s personal to these defenders,” Anderson said. “It’s fun to watch them play, they just do not want to get beat. I’m so proud of Maddie Angelo, I thought she was a stud tonight.”

Lindsey DeHaven’s service swung in where Leah Malone won a jump ball over two North Penn players and directed a powerful header inside the near post with 8:16 to play.

“We were working on PKs and struggling on them but our corners in practice were amazing,” Anderson said. “I think out of the 30 we took, we scored on half so I was feeling pretty confidence. Then, we get zero corners in the first half so we talked about at halftime at getting corners, so it was nice to see them fight for a corner then score off it.”

It took less than two minutes for Pennridge to seize the advantage. Malone won the ball off a North Penn throw in the Rams’ defensive third; sending it long only to have the Knights hit it back into the midfield.

Ashley Gordon and Chance Hendricks each won a tackle, with Gordon poking it on to Kriney, who carried it from there. The sophomore played the ball forward, used a crafty touch to slip a defender and just before the same defender was able to close and challenge, Kriney hit the ball and found the back corner on the far post.

“I scored on them from around that spot in the first game so that was a good spot for me,” Kriney said.

“I’m not sure there’s many people who finish that but that’s her shot,” Anderson said. “Most people end up missing the goal and she puts it in. It seems fitting that was her goal.”

In the first half, Pennridge’s midfield and forwards just didn’t connect well. Some of that goes to North Penn, which had another strong defensive performance and some goes on the Rams themselves.

There was just a lack of timing and a number of passes either skidded out of bounds or eventually rolled to the feet of a Knights defender as the forwards didn’t read where the midfielders were spraying their passes.

After taking the lead, the Rams went into lockdown mode knowing full well North Penn only needed one clean look to tie it up. The forwards kept the ball at their feet, the midfield helped move possession and the backs were determined not to get beat on any foray forward by the Knights.

The commitment turned into a scoreless final act, sending the Rams to Saturday’s final against No. 2 seed Boyertown, set for a 4 p.m. start at Spring-Ford. It’s the second district final trip for the Rams in four years, who also played in the title game in 2016 against Neshaminy.