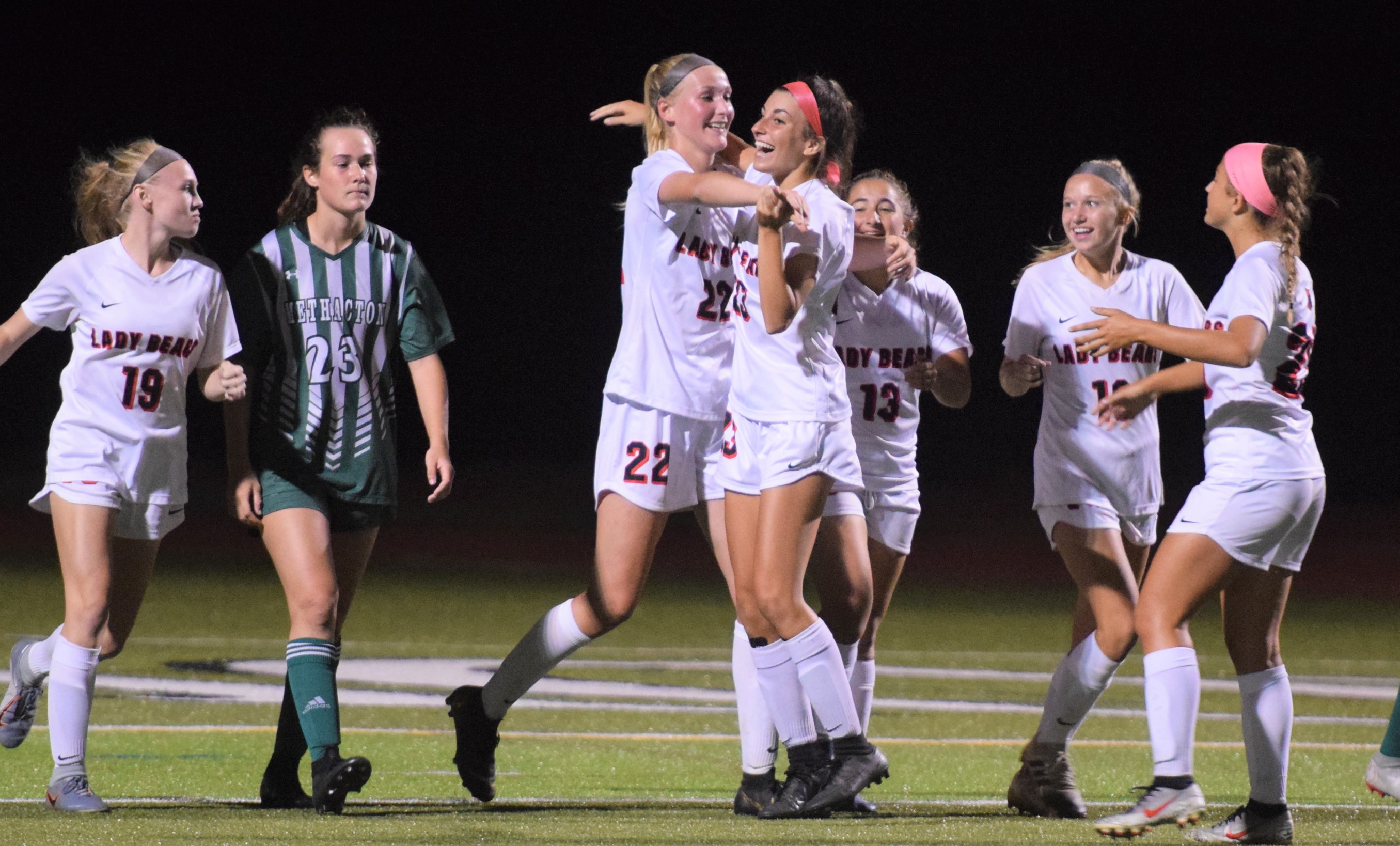 FAIRVIEW VILLAGE >> The Boyertown girls soccer team always seemed neck and neck with its nearest rivals last season. But in the biggest games, there seemed to be a tiny bit missing.

You’d still be searching into next week to find something missing Tuesday night when the Bears put all the pieces together with a dominant 5-0 victory over Methacton in Pioneer Athletic Conference Liberty Division action.

“I think everybody did their very best, gave 100 percent from the beginning until the end,” Kuever said. “We scored really good goals and it was a really good team performance.”

“Overall, our work rate was great,” Goffice said. “Past games we may have sat back on teams and just went with the flow. But this game we had really high energy the whole game and really worked as a team.”

The addition of midfield wunderkind Kuever, a German exchange student who is a member of the Germany U16 women’s national team, has put those thoughts of being a leading player short into the distant past. A complete midfielder with strength on the ball and a keen attacking sense, Kuever’s quality has elevated the Bears’ collective, as evidenced by their 10-1 record (5-1 PAC Liberty, 7-1 PAC) and No. 3 ranking in District 1 Class 4A.

“(Camilla) brings an overall confidence to us,” Goffice said.

“She’s really helped connect the defense and forwards and is really strong in the midfield. She’s what we needed to connect everything,” said defensive midfielder Madison Monka.

Kuever has established many connections with the Boyertown team, thanks in large part to the positive atmosphere around the Bears.

“I was a little scared in the beginning. I didn’t know how it would work,” Kuever said of joining the Bears in preseason. “But the girls are all very nice and I felt very welcomed. It’s been really fun on the field.”

Talent aside, it’s been an adjustment for Kuever to the more physical style of play in U.S. high school play and volume of games (3-4 per week versus one per week).

“Having Camilla and the way she’s fit in with our team, not only with her ability to play, but even more she’s an extraordinary person who fits right in with our culture,” Boyertown coach Bill Goddard said. “We’ve adjusted well to her and she’s adjusted well to us. It’s pretty ironic because if you didn’t know any better, you’d think she’s been here her whole life.”

Five-star night >> The first half was one-way traffic in the Methacton half with Boyertown in charge. The Bears broke through 16 minutes in with Goffice getting free down the right, her first cross coming back her way, the second finding the foot of Beidler from short range.

Boyertown doubled the lead 1:28 to half when Monka played in an unmarked Sheahan on the right side for a 2-0 halftime lead.

Had Methacton goalkeeper Kate Greene (10 saves) not been so up for it, Kuever would have had a first-half hat trick, her nicest chance on a long flick header from a Mikayla Moyer free kick. She got on the board from the penalty spot 2:30 into the second half after Kayley Mattis was fouled in the area.

She wasn’t to be denied this time.

“That was what I thought when I took the PK,” Kuever said. “Yeah, I really wanted to score.”

“We knew she was going to get one. She rocketed that,” Goffice said.

The same applied to the beautiful fourth Bears goal. Goffice headed down to herself and carried down the left flank to the end line. She opened up to see a crashing Kuever and hit her right in stride for a 12-yard rip and 4-0 lead.

Fifty-one seconds later, Goffice played in Devlin through the right for the dagger.

Methacton had its best stretch down 3-0 led by the strong play of Kate Evans and Michaela Tommarello. A free kick from 30 yards to the top left corner by Ruby Murray looked goal bound but Bears keeper Maddy Gallagher (five saves) did excellently to glove it and keep her shutout, a recurring theme for a team that has only conceded four goals.

“We had two freshmen scores goals, Camilla had a big night, Sam Goffice is always in the mix, Maddy Monka and our back four did an outstanding job and Maddy Gallagher had a couple key saves,” Goddard said. “I still think we have things to improve in a variety of different areas, but if you want to in the conversation of the league or the district or possibly even get into the state tournament, you’ve gotta continue to improve. You can’t stand still.”

Lows and highs >> Methacton entered on a high after defeating Owen J. Roberts for the first time since 2014, 3-2 Monday night. Julia McCann, who was out Tuesday after suffering a broken nose Monday, scored the game-winner after Methacton scored all three goals in the first half.

The Warriors weren’t able to ride the wave.

“We’re a young team so we have good games but follow it up with … the first half was sloppy,” coach Bret Smith said.

Tuesday aside, Smith has been pleased with his underclassmen-heavy side.

“Our possession has been good and stringing short passes together,” Smith said. “When we’re on and winning the possession battle, we’re getting chances in behind the defense.”

Smith has endured some tough years, so even at 4-7, there’s been positive signs and reasons to feel good around the Warriors.

“(In those previous years) it was a slew of injuries, attitude-wise it wasn’t great sometimes, but there’s a whole different feel that started two years ago, the culture started back in the right direction,” Smith said. “The girls are having fun and things are heading in the right way.”

Big picture >> Boyertown sits in second place in the PAC Liberty behind unbeaten Spring-Ford. The Bears finish the week with Phoenixville and Berks I second place Wilson. They meet Spring-Ford in the return leg on Oct. 3 at Boyertown.

Methacton is 3-3 in the PAC Liberty and meets Pope John Paul II in a PAC crossover to close out the week. It was No. 30 in the District 1-4A rankings after Wednesday.