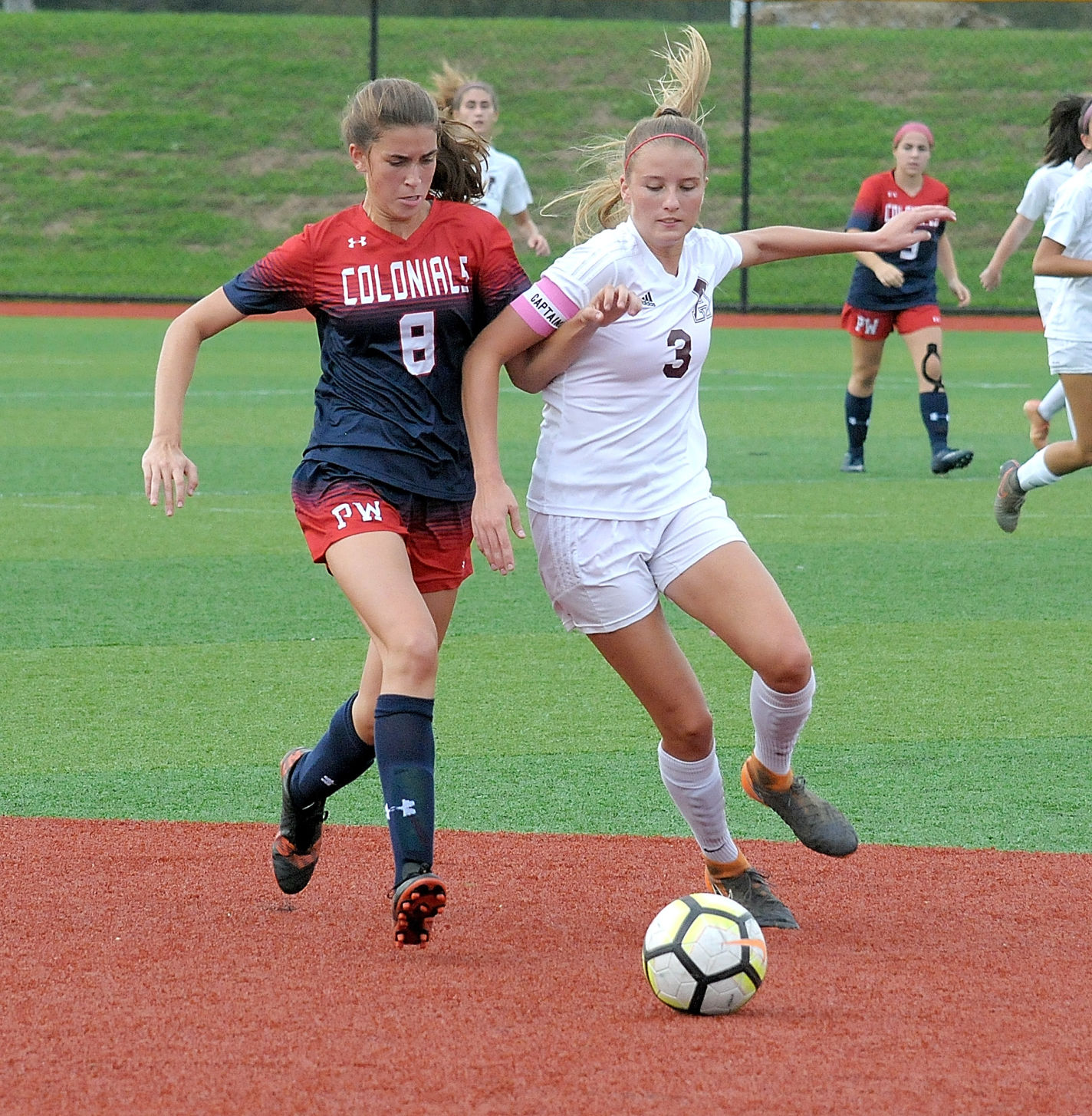 Cam Lexow thought it was just another post-graduation congratulatory text.

Then the second message from Abington girls’ soccer coach Rick Tompkins came across her phone and Lexow knew something was up. That something was yet another honor for the Galloping Ghosts standout, one that served as bow not only for a superb senior year, but a stellar four-year career.

Lexow was named the Gatorade Pennsylvania Girls Soccer Player of the Year on Thursday, finishing off a year for the future Virginia Cavalier that also saw an all-state and All-American selection.

“Coach Rick told me I was nominated, I filled out all the information about two months ago and a little later got an email saying I’d made the top 10 and I would be notified,” Lexow said. “I got a text from Coach Rick that said ‘Congratulations, you’re the best’ and I thought he meant graduating because it was the day after. I said ‘thank you,’ and he replied ‘it should have been announced (at graduation)’ which is when I got confused and checked my email to see I was player of the year.”

Lexow helped the Ghosts win the SOL American title in their first season in the conference and Abington built on that by winning its first postseason game in at least a decade and advancing to the District 1-4A quarterfinals. Playing mostly as a midfielder, but showing plenty of versatility, Lexow notched 25 goals and 11 assists as she and fellow senior Kailey Horton were named conference co-players of the year and earned the pair all-state honors.

While Lexow is the first player from Abington to be named Gatorade Player of the Year, she’s far from the first player in Southeastern PA to pull home the honors. Since the 2013-14 season, when former Neshaminy and Penn State standout Megan Schafer won it as a senior, four players from District I have won the award.

“Everyone is pretty excited about it, obviously it doesn’t happen every day and I’m keeping my fingers crossed because I understand she’s up for the national award and there’s a chance it might get better,” Tompkins said. “I don’t know anybody could have predicted the extent to which she played, but you could tell she was special as a freshman. At the first practice, her technical ability stood out, so I’m not surprised she’s grown, I’m now surprised she had a good year and I’m not surprised we did well.”

Former Villa Joseph Marie standout Murphy Agnew, a rising junior at Harvard, was the most recent recipient in 2017 while Lexow’s future teammate at UVA, West Chester Henderson grad and rising Cavaliers junior Sydney Zandi, won as a sophomore in 2015. Lexow noted the award meant a little more to her knowing so many UVA players, including Zandi, had won it before her in their respective states.

“I look at it as honor for them and when I got I nominated, I really wanted to win,” Lexow said. “Now actually winning it, it makes me more confident. There were times in my high school seasons where I’d get frustrated but this showed me I was able to overcome it and show everyone I was a good player.

“I was confident in myself, but I thought a season like this would be a stretch given the versatility in our team. But after all this, getting All-American and now Player of the Year, it put everything straight in my mind and I’m really happy.”

Her brilliant season at Abington helped her earn a spot in the 2018 High School All-American Game, which took place Dec. 1 in Orlando, Florida. Lexow, who was part of the East squad, played four different positions during the course of the match and generated five shots on goal.

Despite her side losing and being shut out, Lexow created three other near-misses and her selfless play and versatility earned her a spot on TopDrawerSoccer.com’s Best XI for the game. Getting picked as one of the top players in the game was a validation on all the hard work Lexow had done.

“Getting top 11 out of everyone there, I’m really proud of that,” Lexow said. “I think people nominated me based a lot on my stats but being able to translate that through my work ethic and representing Abington at the All-American game, I’d say that was my most proud moment.

The Gatorade Player of the Year award isn’t solely athletically based and heavily weighs academics and off-field endeavors. Lexow, who had 47 career goals and 27 career assists, graduated with a 4.07 weighted GPA, coaches youth soccer and volunteers with the Special Olympics and at Briar Bush Nature Preserve.

Abington qualified for the postseason when she was a freshman, but the Ghosts got bounced in the first round despite Lexow — who didn’t play a minute of regulation or overtime — hobbling out on a bad knee to take a penalty kick. The next two years, the Ghosts didn’t come close to the postseason, so Lexow and Horton (who has committed to Drexel) were determined to make a run this season.

“You try not to mess her up,” Tompkins said. “When they’re that talented, it’s a matter of making sure you don’t impede their progress. She’s driven.”

For Lexow, that meant ramping up her already daunting schedule of training. On top of playing at Abington, she would drive an hour away multiple times each week to train with Penn Fusion’s Developmental Academy team, started training with one of the top coaches in the area in Jorge Rodriguez, worked on her own with her dad in the family garage and turned to her other sport just to take some pressure off.

“I’d lift on my own, sometimes I’d go with (boys’ basketball players) Lucas Monroe and Darious Brown and if I needed to get my mind off soccer, I’d play basketball with Miranda (Liebtag) and some of the guys’ team,” Lexow said. “I was focused on staying in shape, but it came down to working hard at everything I was doing. Even if it didn’t help me as much as something else would, I made the commitments and I had to follow those commitments.”

Lexow was also a four-year varsity player on the girls’ basketball team, starting three seasons and turning in a terrific senior year where she averaged 10.9 points per game and led the team in steals and deflections.

“My experience at Abington has been very, very good,” Lexow said. “The girls weren’t just teammates, they became my family and that’s in both sports I played. Senior year for me was the best year, in basketball we overcame a lot of things and we were one, we played as one. When we beat Neshaminy (in the SOL basketball title game), it was something we had to overcome.

“In soccer, we had some gaps but we filled them and our mindset was to work together and overcome. I still think of the Pennridge game (a 2-1 overtime loss in the district quarterfinal), just the other week I was out with a friend and saw someone in a Pennridge soccer shirt and I got upset. I still think we should have won, but we didn’t and that’s just how soccer goes.”

With her first college preseason not all that far off, Lexow said she’s going to keep working hard all summer until it’s time to depart for Charlottesville. On top of the preseason packet the UVA coaches sent her with weekly workout and running plans, she’s training under Rodriguez with a group of other local college players and Lexow added she’s trying to eat smarter and healthier.

“I just want to be on the field,” Lexow said. “I want to come in, train hard with them and make a good impression, show them my work ethic and that I’m resilient like I was at Abington and find a way to translate it at UVA.”

Lexow embraced her leadership role this season. Thompkins asked her to be a mentor of sorts for sophomore Casey Touey in the fall and the two spent a lot of time pregame or at halftime talking about what they were seeing and how to take advantage of what the defense was giving.

“She’s really well-liked, when you have a star like that it’s not always the case but it’s a credit to her family and a credit to her, she carried herself with a lot of poise and dignity,” Tompkins said. “She was the player to have and I’m going to miss her. Those athletes don’t come along very often and I’m lucky to have coached her.”

The Ghosts won’t be able to replace Lexow, but she’s plenty confident the returning core of players like Touey and Abby Bautista can carry the standard she, Horton and the rest of the senior class set. During the fall, Touey called Lexow an “icon” and now, everyone in Abington can call her the state’s Player of the Year.

“I honestly expect to see her play for the national team one year, I can see that in her future,” Tompkins said. “She has the ability, she has the drive and know she wants to play for her country at some point. So far, everything she’s wanted, she’s been able to attain.”