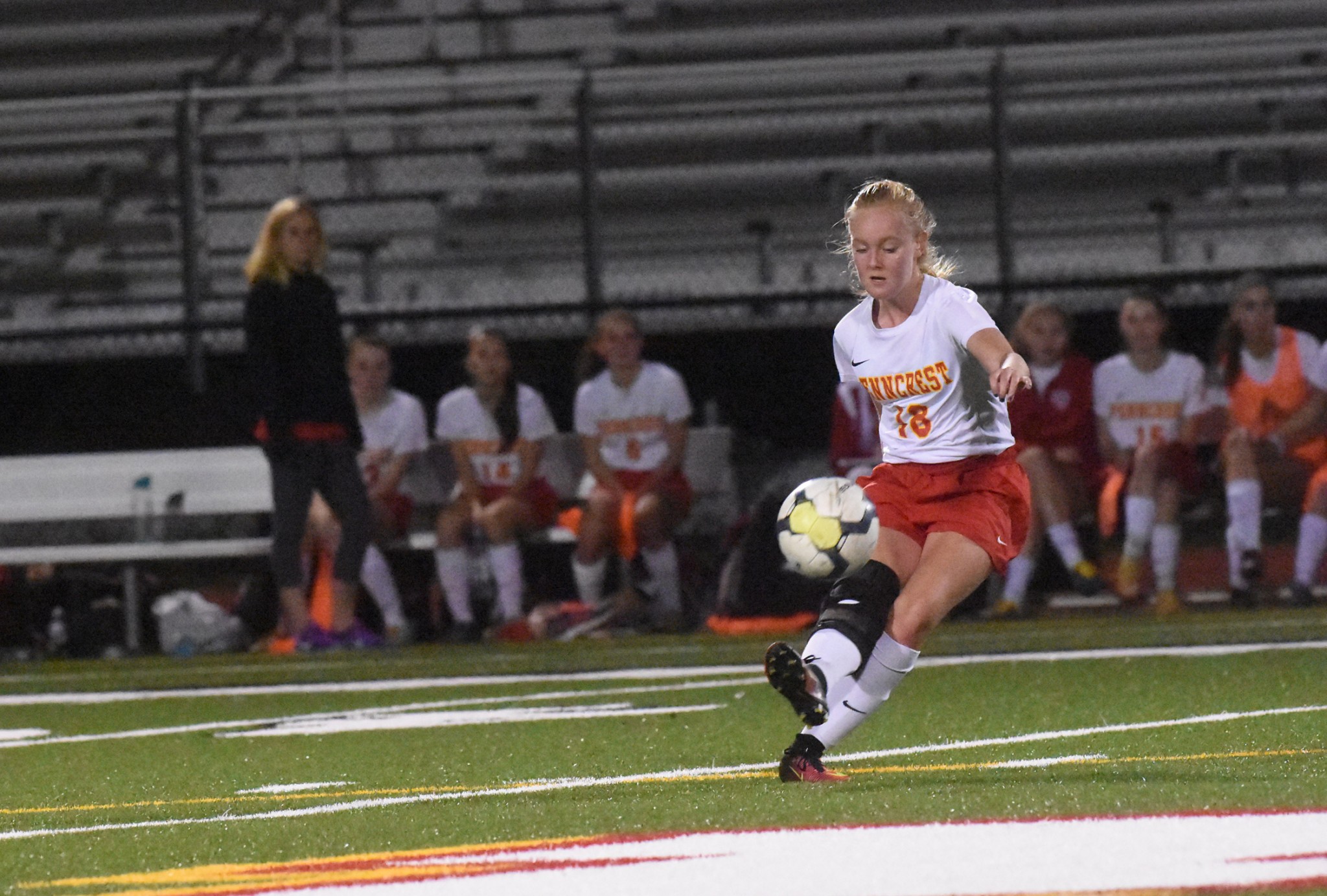 In addition to Player of the Year Lizzie King, the rest of the All-Delco team includes:

Morgan Messner, Episcopal Academy: The junior goalkeeper split time most of the season with her talented classmate, Hannah Moriarty, but when push came to shove, the Boston University commit assumed the first goalkeeper’s gloves. The first-team All-Inter-Ac pick logged the full 80 minutes in seven of the team’s nine clean sheets. Messner stopped six shots in a Sept. 16 win over eventual Pennsylvania Independent Schools Athletic Association champ Westtown, and she produced six saves in a 2-0 win over Agnes Irwin Oct. 18. Messner stopped five shots in the second half of the return date with the Owls, a 3-0 EA win.

Carly Dunford, Penncrest: Just a sophomore, Dunford spearheaded a defense composed of two sophomores and two freshmen. Despite the youth and a rotating cast of goalkeepers, the defensive talent was obvious: Penncrest allowed 14 goals all season on the way to the District 1 Class 3A final and the first round of the PIAA tournament, posting 13 clean sheets. In the first 18 games of the season, the Dunford-led defense allowed seven markers. Dunford, a two-year varsity starter, recovered from an ACL tear that curtailed her freshman campaign. She scored her lone goal in a 2-0 win over Kennett Sept. 16.

Lilly Shaner, Episcopal Academy: The senior center back, who recovered from a serious leg injury that ended her junior year, assumed an even larger role for the Churchwomen when All-Delco and fellow co-captain Molly O’Brien went down with an ankle injury nine games in. With Shaner’s help, EA surrendered 20 goals in 21 games. The first-team All-Inter-Ac selection scored five times, including in the 2-1 regular-season win over Westtown and from the penalty spot in the first win over Agnes Irwin. Shaner’s season highlight was an overtime game-winner scored off a direct free kick to beat Hun School, 2-1, Oct. 6.

Brianna Blair, Haverford: The senior defender was the standout on the Fords’ backline, using her physical game to hold down the right back position. With Blair, the Fords posted 14 shutouts, surrendered eight goals in 20 games and advanced to the second round of the District 1 Class 4A tournament. Blair also chipped in offensively, scoring six goals, all in league play, five in Haverford wins. Blair’s long throw-ins also proved difficult to defend, setting up numerous scoring chances, four of which resulted in assists. Blair will continue her career at Cabrini.

Amelia Durfee, Haverford: The senior was the Fords’ midfield general, orchestrating play from her deep-lying position and doing the box-to-box work that informed the Fords’ success on both ends of the field. Durfee was the team’s leading scorer with nine goals, including two each against Harriton and Interboro. She added six assists. Durfee also contributed to the Fords’ sterling defensive record, helping Haverford win 15 games and get by West Chester Rustin in overtime in the first round of the District 1 Class 4A tournament.

Bella Sorrentino, Archbishop Carroll: The senior midfielder was again at the heart of everything the Patriots accomplished. Sorrentino tied for the team lead with eight goals, adding eight assists. The four-year starter began the season quickly with four assists in the first two games, including three helpers in a 5-2 Catholic League win over St. Hubert. Sorrentino set up both tallies in a win over Delco rival Cardinal O’Hara and scored twice in a 3-1 win over Bonner & Prendergast. A first-team All-Catholic pick, Sorrentino will continue her career at Temple University.

Gia Dragoni, Garnet Valley: The sophomore midfielder/forward stepped up to fill the void left by injuries to, among others, her older sister and two-time All-Delco Britney. Dragoni led the Jaguars back to the District 1 playoffs, scoring a team-high nine goals to go with four assists. The first-team All-Central pick scored the Jags’ only goal in the District 1 Class 4A ouster at the hands of West Chester Henderson, 2-1. Dragoni scored in a 2-1 win over Episcopal Academy and registered both tallies, including the overtime game-winner, in a Sept. 29 victory over Lower Merion.

Gia Martyn, Penncrest: The senior midfield engine powered the Lions to the District 1 Class 3A final and state tournament. Martyn scored five goals and 14 assists and seemed at her best in the biggest moments. She provided a goal and an assist in the regular-season tilt with Conestoga. She supplied assists in six straight games to end the regular-season and start the playoffs. Martyn, an All-Central pick, registered a superb free-kick goal plus an assist on Tara Higgins’ overtime game-winner to get Penncrest to states, 2-1 win over Gwynedd Mercy. Martyn will continue her career at Indiana University of Pennsylvania.

Maura Holst, Radnor: The Raiders struggled to a sub-.500 season, but that didn’t dent the midfielder’s brilliance. The Fordham commit and two-time All-Delco scored 11 goals, the only Raider with more than three. She accounted for 55 percent of the 20 goals Radnor scored. The All-Central pick recorded a hat trick against Upper Darby Oct. 7. She tallied both goals in a 2-1 win over Ridley, and earned Radnor a point with a penalty kick in a 1-1 draw with Springfield. Goals by Holst netted Radnor a 1-0 win over Marple Newtown and a 1-1 draw with Garnet Valley to squeeze them into the District 1 3A tournament.

Alex Thompson, Delco Christian: The senior forward propelled the Knights to the District 1 Class A final. Despite regular man-marking, Thompson tallied 21 goals to lead the Knights within a hair of states. Thompson scored the first goal of the 3-0 semifinal defeat of Christopher Dock, the first time the Knights had ever bested their league albatross. That goal culminated a six-game personal scoring streak and a run of scoring in nine of 10 games. Such streaks were common: Midseason, for instance, Thompson scored in three consecutive games – a win and two draws – which accounted for the only results in a six-game stretch where no other Knights scored. Thompson will play at St. Bonaventure next year.

Lindsay Haseltine, Christian Academy: The senior forward edged Delco Christian’s Alex Thompson for Bicentennial League Constitution Division Player of the Year and helped end DC’s season in the District 1 final. Haseltine scored the opener in the finale and set up Hannah Sareyka’s game-winner in overtime of a 2-1 victory. Haseltine tallied 35 goals and 21 assists. She scored half of TCA’s 70 goals on the season and had a direct hand in 80 percent of TCA’s markers en route to the program’s first ever PIAA tournament berth. She scored five times against Faith Christian Sept. 20 and five times finished with four goals in a game.