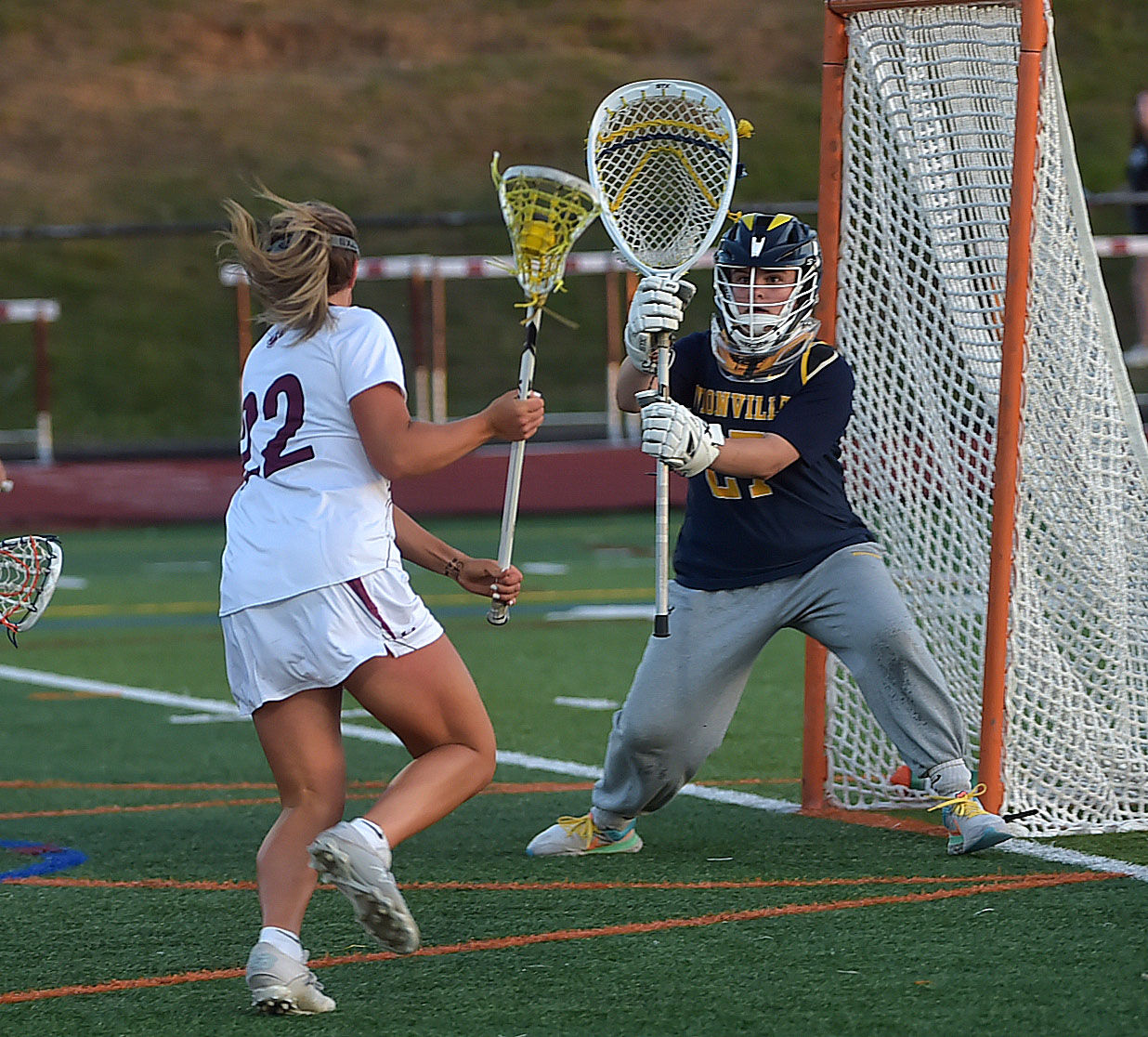 CONCORD – Thursday’s District 1 Class 3A girls lacrosse final was barely nine minutes old when Kait Henning lined up an eight-meter shot and waited for the whistle.

This early in the game, the result of the restart between Henning and Unionville goalie Mattie Robitzer wasn’t going to ultimately decide the game. But the tone that Robitzer set ended up being too much for Garnet Valley to push back in its favor.

Robitzer stopped that effort from Henning, plus eight other shots in a sterling performance, shackling Garnet Valley’s offense and leading the Longhorns to the District 1 title, 9-3.

The offensive output was the lowest of the season for the third-seeded Jaguars (19-3), the previous low of six coming against Radnor. It was also a stirring reversal from GV’s 10-3 win over Unionville just two weeks ago, and it makes the fifth-seeded Longhorns the first non-Central League team since 2015 (Great Valley) to win the District 1 title in the largest division.

The reason was Robitzer, who was all but unbeatable. From that first save on, charging quickly off her line to cut down the angle and deny Henning high, she was aggressive and quick to the ball.

“The first save I make of the game kind of sets the mood,” she said. “If I make a save early on, I’m really happy with it. It makes me so hyped for the rest of the game.”

After a while, it couldn’t help but get into the Garnet Valley shooters’ heads. The mantra from the attack, Sophie Kingsborough said, is to “see the white,” as in the twine behind the goalie. But with Robitzer’s positioning taking away space to shoot and the saves piling up in concert with the Jags’ deficit, you can imagine the real estate Robitzer was occupying in attackers’ minds.

“With a goalie like this who came out far, was really good up high, we have to take that extra second to place it around her, fake high and shoot low, just change our levels,” Kingsborough said. “… It’s tough not to get in your own head but you have to erase it and restart.”

Not to judge but @goUathletics did trophy time much better than Springfield pic.twitter.com/AmAUgOTzAP

Kingsborough was the only Jaguar to solve Robitzer in the first half, Unionville taking a 5-2 lead. That was the same deficit Garnet Valley had surmounted in the semifinal against Radnor in a 7-6 win.

But Robitzer prevented a repeat with three saves on the opening possession of the second half. Garnet Valley possessed the ball for three minutes and 40 seconds, but Robitzer fought off two shots from Sydney Pyon and one from Maddie Kalish.

“I think that was huge,” she said. “Going into that, I was thinking whoever gets the next goal can change the momentum. So getting those saves and being able to send it down was really huge for the half.”

Robitzer gobbles up a Kingsborough 8 meter, then Delaney Harlan scores in transition. 7-2 Unionville. 13:10 left. This has been comprehensive so far pic.twitter.com/Uj9P71OVRh

Equally huge was the performance of Anna Brown. She scored four times in the first half, then rewarded Robitzer’s stand in the second by pumping home her fifth to make the score 6-2. The mountain to climb rose to 8-2 when Shannon Garvey deposited her second goal.

At that point, Garnet faced the conundrum of needing to push the pace while wanting to value possession and pick the perfect looks required to actually beat Robitzer.

Kalish scored with 9:41 to play to make it 8-3, and she would’ve cut the deficit to four had a goal not been wiped off. Ultimately, that wouldn’t matter, not against the Robitzer-led parade to the trophy.

“This is cloud nine,” Robitzer said. “We’ve been working so hard all year and just to see something tangible like a medal – I know they say don’t do it for the trophies, but it feels really good to come out here and win a trophy, especially after having the season canceled last year, being able to come back so strong and winning is great.”