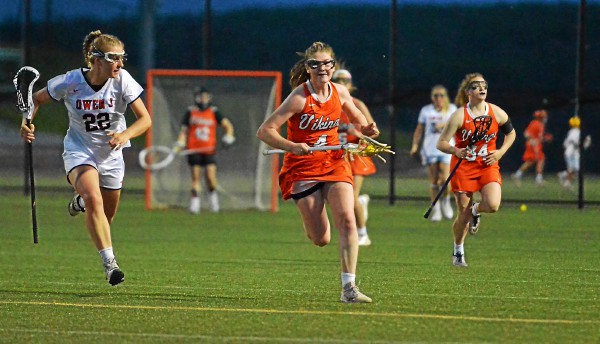 Being the underdog can have its perks.

Yet in the end, the Lady Vikings came out as top dogs with a historic 9-8 win for their first victory in the second round of districts in program history.

“These girls played with so much pride and determination and they truly played for each other,” said PV head coach Lisa Clark.

With the win, No. 12 Perk Valley advances to face No. 4 Central Bucks West – a Thursday winner over No. 20 Methacton – on Saturday at a time yet to be determined.

Along with four goals from Paige Tyson, Anna Dawson scored twice while Kat Kelley had a goal and three assists for PV. Kate Hickey and Caitlin Leap rounded out the scoring with solo tallies while Riley McGettigan had an assist in front of Lauren Foley’s 15-save performance in goal.

“Every person wearing an orange jersey contributed to that win,” said Clark. “As a coaching staff, we couldn’t be more proud of the young ladies that represent our program.”

Katelin Williams finished with five scores for No. 5 Harriton while Molly McDonough had two goals and an assist. Lucy Dwyer had a goal while Devin McLain made nine saves in goal.

A win Saturday would give Perk Valley its first trip to the PIAA playoffs while a loss would drop them into playbacks.