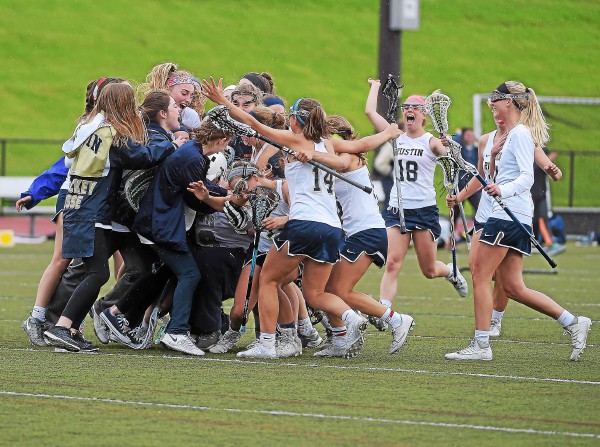 Westtown – Minutes after West Chester Rustin clinched the Ches-Mont girls’ lacrosse championship with a 6-5 win against West Chester Henderson Thursday, the Golden Knight seniors were choked with emotion realizing what they’d accomplished – and how far they had come from a 2-16 record three years ago.

“My freshman year, we were losing games 25-1, and it was hard to keep showing up for games,” said Rustin senior defender Elise Krikorian. “But we’ve bonded together these last few years, and we’re like family.”

Rustin senior midfielder Skyler Demis, who scored twice Thursday, said, “Winning this title makes all the hard work we’ve put in during the last four years worth it – all the rainy games we played early in the season, all the weightlifting and running we did in the offseason.”

Senior attack Michelle Chessock, whose goal early in the second half Thursday put Rustin ahead for good, said, “When the game ended, it was so emotional – I always knew we could do it. Every year, we kept getting closer [to the title], adding piece by piece. Everyone on this team is so positive, we’ve got each other’s back, and our parents have been so supportive.

“Our defense came up huge today – and our goalie really pulled it out for us.”

Rustin goalie Maddi Montebianco made 10 saves Thursday, including one stop in the closing minute when Henderson had penetrated deep into Golden Knights territory.

The win gave Rustin a 11-1 league record (15-2 overall). Unionville entered Thursday with an identical 10-1 Ches-Mont record, but Rustin owned the tie-breaker (a head-to-head win) so a win by the Golden Knights Thursday clinched the title.

“Maddi played out of her brain today,” said Rustin head coach Mike St. Clair. “Our whole team played well – defense, attack, midfielders. All the work we did in the weight room and in the training room has paid off for us.

“The key for us today was being focused and keeping our composure. Our players battled tough today – they knew what was on the line.”

Although Henderson came into the game with only a 6-5 league record, the Warriors were up for this contest for at least a couple of reasons.

“Henderson-Rustin is a big rivalry,” said Warrior head coach Lauren Purvis. “We hung with Rustin right down the final minute – we had something to play for today, we’re right on the edge [for consideration] in the district playoffs.”

“Henderson-Rustin, in any sport, is always a real battle,” said St. Clair.

When Demis scored on a free shot with 1:29 to go before the half, it looked like the hosts would head into halftime with the lead. But Henderson penetrated deep into Rustin territory in the final minute, and Warrior junior midfielder Peighton Bement scored with 18.8 seconds left to tie the score 2-2 at halftime.

In the first half, both teams (particularly Rustin) featured a patient attack with plenty of passing, which helped to account for the lack of scoring. Montebianco and Henderson senior goalie Ann Lalicker (seven saves) also kept the scoring at bay.

In the second half, the Golden Knights kept the visitors off the scoreboard for the first 15 ½ minutes, while getting goals from Chessock, Demis (on a free shot) and Ashley Chisholm (who scored after a long run near the goal) to give the hosts their biggest lead of the afternoon, 5-2.

Rustin’s attack was spread out in more ways than one, as five different Golden Knights scored a goal (Demis had two).

“We just don’t rely on just one or two key people – we have 11 people that can shoot, 11 who can play defense, and we have six who can take the draw,” said Demis. “Our nerves were out early today, but we worked together as a team.”

Chisholm’s goal with 9:24 left gave the hosts a 5-2 lead, but just 11 seconds later, Henderson junior midfielder Shannon Early scored after a long run from midfield to make it 5-3.

Rustin senior attack Kylie Videon gave the hosts some breathing room with a score at 7:17, but one minute later Bauer scored her second goal of the game, just after a turnover by the Golden Knights, to make it 6-4.

When the game ended, the players on the Rustin bench raced onto the field to embrace their teammates – the newly-crowned Ches-Mont girls lacrosse champions.

“Our defense just kept coming through today, particularly in the last two minutes,” said Montebianco. “I’ve never been more impressed with them as I was today.”