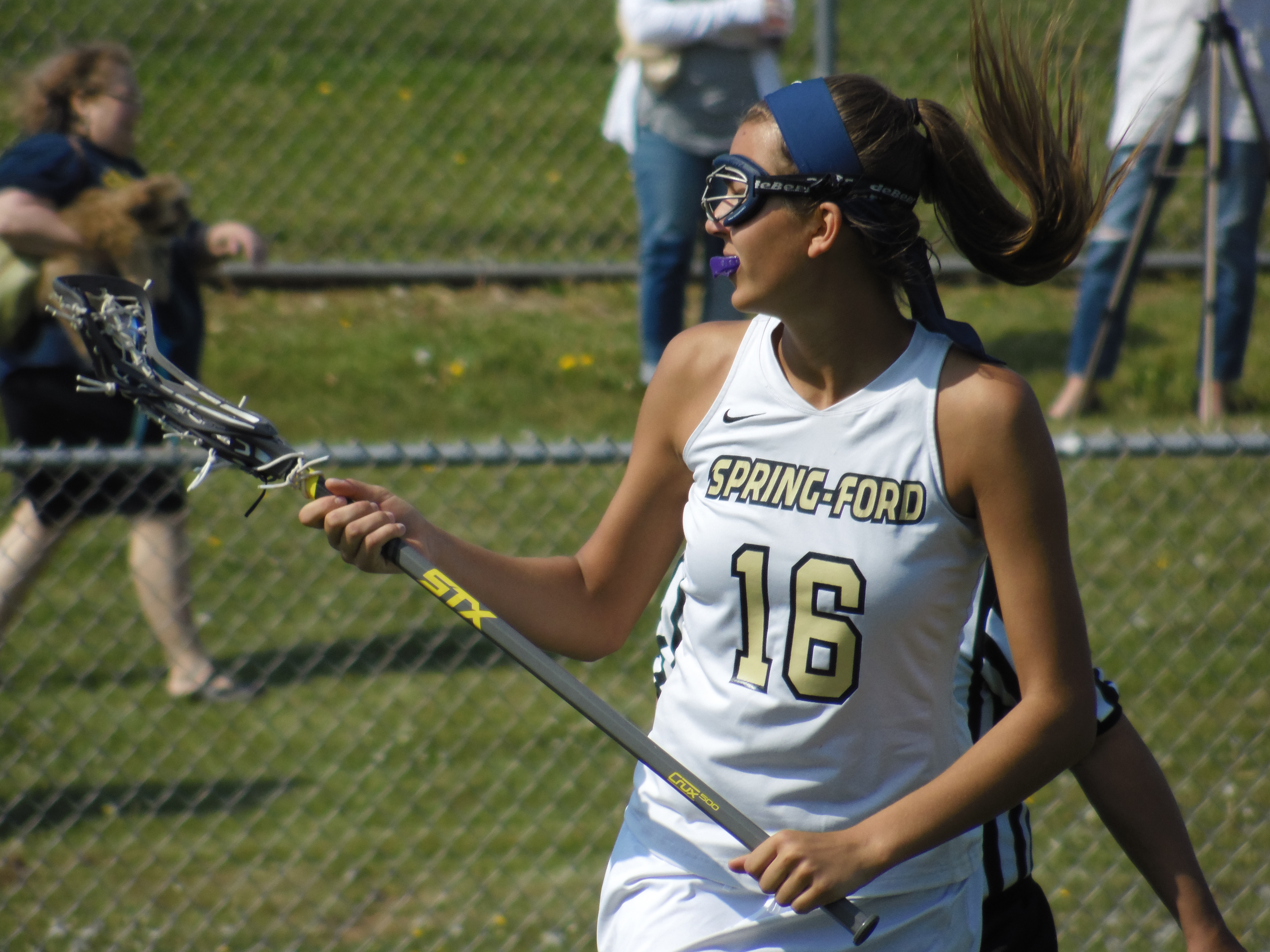 The day belonged to Spring-Ford.

Entering Thursday afternoon in the midst of a five-game winning streak, the Rams kept their foot on the gas pedal, powering past Pope John Paul II 16-5.

“We started off kind of slow,” said senior midfielder Camryn Jones, “but then we picked it up together as a team. We moved the ball well down the field and kept looking to make transitions.”

Jones led the way on the afternoon, notching a game-high six goals and adding three assists as Spring-Ford used an 11-point swing to break open a 2-2 tie game just over 10 minutes in. Jill Quigley and Brianna Cirino each posted hat tricks while Cassie Marte scored twice and added an assist.

“That’s the way our offense has been,” said Jones. “We’ve been trying to spread the ball on offense and give ourselves plenty of chances at the net. As a team, we try and benefit each other, not just ourselves.”

“We play unselfish,” added Anja Sweeney. “We’ve been moving the ball well and spreading the defense out, and it’s really helped us out.”

“Every day — whether it’s practice or a game — we’ve been trying to put together something we can build off of,” said Spring-Ford head coach Amy Short. “Today it was our shooting. We wanted to move (PJP goalkeeper) Charlotte (Williamson) around the goal and create some scoring space.”

Anja Sweeney scored once and had an assist while Olivia Yeagle scored a goal. Goalkeeper Kamille Ward made nine saves, including a sweet jumping save on a fast break midway through the second half.

The win improves Spring-Ford to 6-2 in PAC-10 play (10-2 overall), as the Rams are vying to reach the No. 2 spot in the Liberty Division. The result, which served as their fifth consecutive loss, drops the Golden Panthers to 3-6 in the conference and 5-6 overall.

“They played us really well,” said Pope John Paul II head coach Maureen Burger. “They controlled the possession and made it really difficult for our offense to get anything going.”

Throughout the game, the Spring-Ford defense swarmed to the cage and shut down nearly every scoring chance the Golden Panthers could put together.

Ram defender Alyssa Conway was tabbed with the task of marking the PAC-10’s leading goal scorer in Rapchinski.

And she didn’t disappoint.

“Right there, No. 3,” said Short pointing to Conway. “She made all the difference for our defense. We put Alyssa on her, and even when there was an open player flashing in front of the goal, she wouldn’t drop off her (Rapchinski). That made our defenders have to see the open defenders and crash to the net.”

Pope John Paul II has some time to rest, with the Golden Panthers next scheduled game set for Wednesday versus Pottstown.

“We need this time to recover and get back into the swing,” said Burger. “This has been a really difficult stretch for us, and we’re dealing with some injuries. So both physically and mentally, it will definitely be good to take a breather.”

The Rams immediately shift their focus to Friday’s opponent Pottsgrove.

“One game at a time,” said Short. “We’ve got to continue to do our best, stay focused and work together as a team. The rest will fall into place from there. We want to keep building from every practice and every game.”

With her nine-point showing on Thursday, Jones surpassed Rapchinski and moved atop the PAC-10’s point leaders with 68 points (49 goals, 19 assists).

On the day, the Rams clinked four shots off the post, with Cirino knocking two off the crossbar while Jones and Sweeney also clanged one.