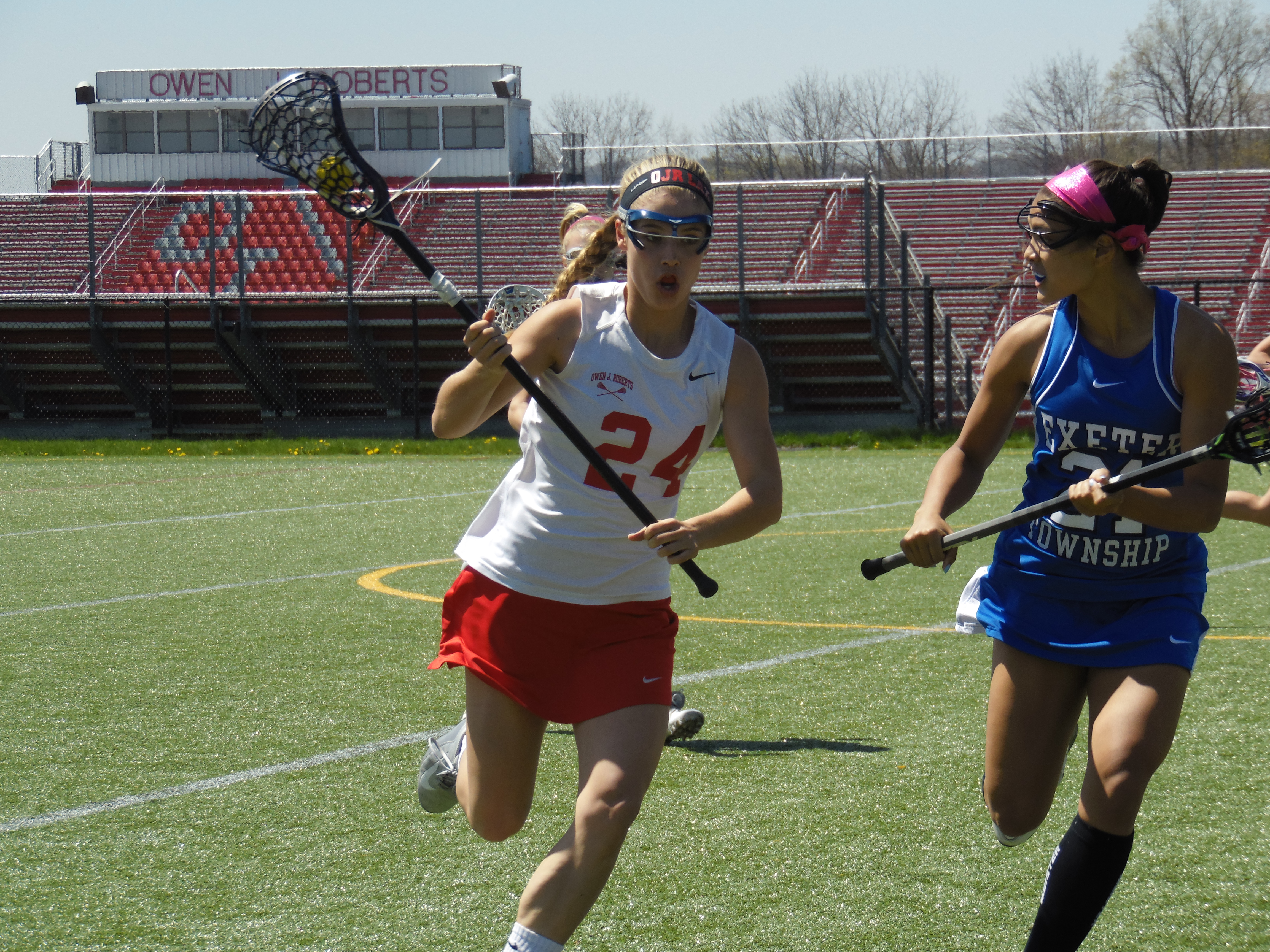 BUCKTOWN >> This season has been all about ramping up the intensity for head coach Joe Tornetta and the Wildcats.

“We want to keep our kids challenged at all times,” he said. “That means both in division games and outside of our division. The PAC-10 is really tough this year, so we’ve got to keep up the intensity in each game we play.”

So who better to go up against than the defending Berks Conference champions?

On Saturday afternoon, the Wildcats stepped up their intensity in the second half and eventually cruised to a 10-3 win over Exeter Township High School.

Kerry Huzzard led the charge for the Wildcats, scoring a game-high four goals while teammates Kelsey Kilgallon and Maddie Gebert added two goals and an assist apiece. Junior Anna Lavelle scored OJR’s first two goals of the afternoon, the latter coming eight minutes in off a feed from Kilgallon.

Though they created scoring chances early and often throughout the afternoon, the Wildcats struggled to convert anything against standout Exeter goalkeeper Leah Franklin (Millersville commit).

“That’s definitely one of the best goalies we’ve seen,” said Huzzard of Franklin. “She’s got strong ball skills and didn’t make anything easy on us. She did a really good job of baiting us — she’d make us feel like we need to aim high or show low, and then she’d recover.”

Held scoreless through the second half, Exeter head coach Jill Rudy says it was her goalkeeper who kept the Eagles in contention for most of the afternoon.

“That’s how she plays,” she said of Franklin. “She stands tall in front of the net and never lets up anything easy. She’s a huge difference maker and she kept us in a lot of games this season.”

Franklin finished the afternoon with 15 saves, including a stuff of Gebert to preserve the one-goal game with 20 seconds left in the opening half. In front of Franklin, Maryn Hubiak scored twice, including a feed from Peyton Halsey with under a minute left before the halftime buzzer sounded. Lexi Einsig also added a goal, but that was all the Eagles could convert as they were shutout the entire second half.

OJR keeper Sara Maute was similarly dominant on the afternoon with seven saves. But it was the possession that ultimately gave the Wildcats the edge in the decisive second half. The Wildcats dominated the draw controls with a 5-2 advantage in the closing 25 minutes and scored three goals in a matter of less than three minutes to seal it.

“We did our jobs in the second half,” said Tornetta. “We were under control and stayed patient. That was key. Against a goalie like her (Franklin), you’ve got to stay patient and let the play develop. That really showed in the second (half).”

The Wildcats’ boost in non-conference intensity comes in no small part to last season. Entering the 2015 District 1-AAA playoffs with a strong seeding, the Wildcats lost their opening round game against Downingtown West, 8-6, thus ending their season well before anyone had anticipated. In addition to Exeter Saturday, the Wildcats also faced defending state champion Garnet Valley to start the season and will also go up against Archbishop Carroll and Souderton later in the season.

“We want to keep going up against strong teams,” said Huzzard. “We definitely want to get a good seeding and redeem ourselves from last year. This should definitely help us.”

Coming off their undefeated run en route to a PAC-10 title last season, Huzzard and the Wildcats are off to similarly fast start again this season. Despite suffering the team’s first conference loss since 2014 (Monday, April 11 against Spring-Ford), the Wildcats seem poised to challenge again for the top spot.

Similarly, coming off their undefeated run to the Berks Conference title last season, Exeter entered Saturday with its lone blemish — a conference loss at the hands of Governor Mifflin.

Exeter’s 2015 season came to an end in the second round of the District 3-AAA playoffs last season. It’s something that Rudy hopes sticks with her upperclassmen as the season goes on.

“Owen J. is a really strong team, so we can definitely take this loss and learn from it,” said Rudy. “We’ve got a lot of young players who are seeing time in our games, so there’s still a bit of growing pains going on. We’re hitting that learning curve right now, but I think by postseason we’ll be ready to go.”