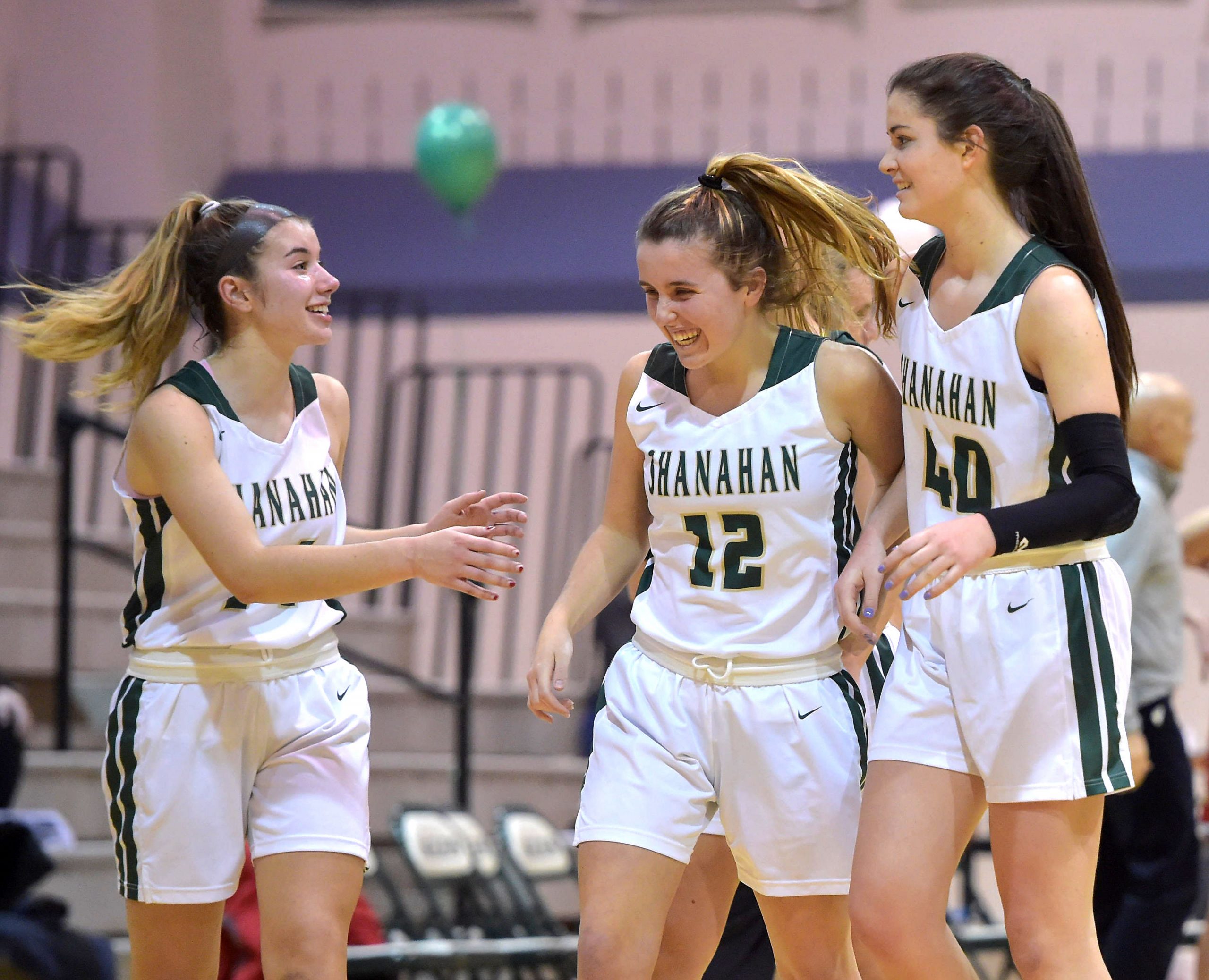 DOWNINGTOWN >> It is simple math: three evenly matched teams vying for one postseason spot. It makes for one of the more intriguing aspects of the 2019-20 girls’ high school basketball season.

We’re talking about the crazy, three-way battle for the second playoff spot in the Ches-Mont National between West Chester East, Bishop Shanahan and West Chester Henderson.

None of the three can catch Downingtown East (10-0), but there have already been some twists and turns to see who will be the runner-up. And on Thursday, Shanahan blasted visiting East, 62-41, on Senior Night to further complicate the situation.

Bishop Shanahan senior Kathryn Greenhut pulls down a rebound ahead of West Chester East’s (3) Kate Douglass in the first quarter.

“It was a real important win because it keeps us alive,” said Eagles’ head coach Jim Powers.

“After the start we had in the first go-round (against division opponents), our backs were against the wall. We have to continue to grind these out. Tonight was a big one.”

Thanks to a career-high 28 points from Kathryn Greenhut, Shanahan improves to 7-3 and moves into a second place tie with Henderson (7-3), which just beat Coatesville Thursday night. The Vikings fall to 7-4, and unlike the other two challengers, only have one game to go.

Despite the lone game, East (15-5 overall) has the easiest finish (at Downingtown West). The Eagles (14-5 overall) have the most challenging finish at home against Downingtown East and a road game at Henderson.

Henderson travels to Avon Grove Tuesday before finishing with the game against Shanahan Thusrday.

“It’s great,” Powers said. “I’m happy for the league that this last week of the regular season there is still stuff that is important.

“It’s exciting. I can’t wait to see how it shakes out. At the end of the day, I hope we’re there, but you never know. It’s not going to be easy.”

The surprising part on Thursday was just how thoroughly Shanahan dismantled a Vikings team that came in riding a five-game winning streak. Against East’s zone defense, the Eagles simply shot over it from distance and that eventually opened things up for Greenhut, a 6-foot senior post player.

“This division is very competitive,” acknowledged Vikings’ head coach Erin Listrani. “Shanahan came out ready to play. I give them a lot of credit.

“Even though we beat them the first time, I knew it was going to be a tough game today.”

In what was, almost certainly, their finest first half of play all season, the Eagles came within a point of equaling their four quarter point total from the first meeting back on Jan. 8th at East.

“We knew this was a game we needed because we’ve lost three already in the Ches-Mont (National),” said Greenhut, who also grabbed nine boards. “We are playing with a sense of urgency because we have something to prove.

“We came out with the right energy and the right attitude. We played some of the best basketball we’ve played all season.”

Shanahan buried five 3-pointers in the first quarter alone to open a 12 point lead, and then began the second with nine points in a row, including seven by Greenhut.

“It was a heck of a start. I couldn’t ask for anything better,” Powers said.

“Once our girls started hitting threes, (East) went to the man-to-man and that’s when I was able to put up some shots,” Greenhut added.

The Vikings had trouble early with Shanahan’s three-quarter court pressure and turned it over six times in the opening eight minutes. East managed just three buckets from the floor and trailed 32-12 at the half.

“(Shanahan) came out hot and we had to make a (defensive) adjustment,” Listrani said. “We weren’t as aggressive in the zone as I would have liked.

“(Shanahan) just couldn’t miss and we got a little rattled and lost our focus.”

The lead topped out at 25 midway through the third period after Greenhut knocked down two 3-pointers and teammate Jacey Petruno chipped in the last of her four from beyond the arc. The Vikings played better the rest of the way, but it was far too late.

Junior Lauren Klieber paced East with 14 points before fouling out. Freshman Mikayla Kushner added nine points, but the rest of the starters combined to connect on one field goal.

“Everybody forgets that we don’t have any seniors,” Listrani said. “We are still young and being in these situations are good for us in the future. Now it’s about how we respond.”

A junior guard, Petruno finished with 15 points and led the way as the Eagles knocked down a total of nine 3-pointers.

“Now we’re definitely fighting for something in this last week (of the regular season),” Greenhut said.

“We are a different team than we were three weeks ago,” Powers added. “Our offensive execution, our confidence — just a bunch of stuff. They are working and they’ve just gotten better.”