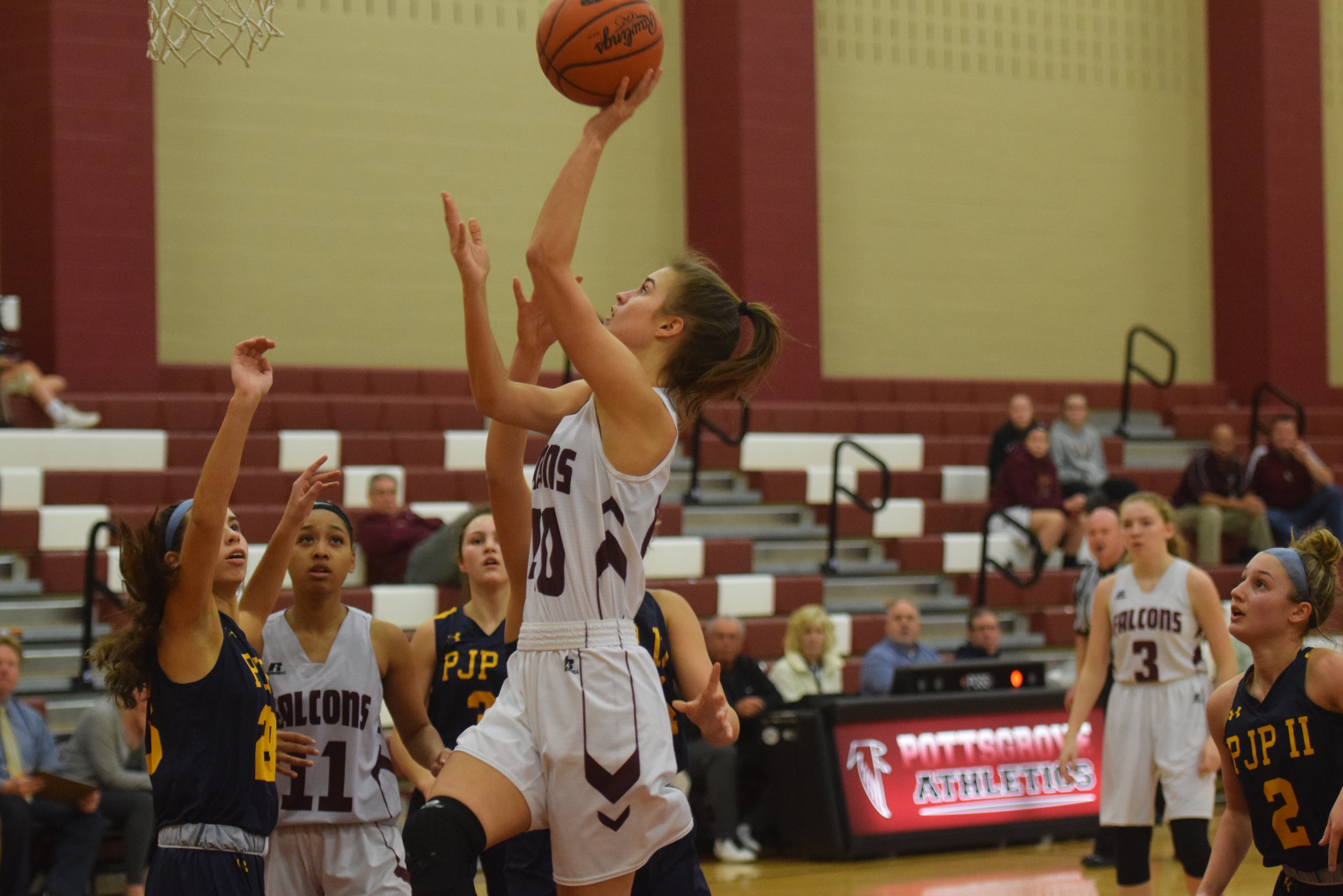 Mowery, a 5-10 junior, contributed a game-high 20 points plus six rebounds, two steals and one assists to lead the way as Pottsgrove defeated scrappy Phoenixville, 51-44.

“We just have chemistry with the team that’s going very well this year,” said Mowery. “We have been playing together for more than four years so it’s our overall chemistry. We play so well on the court. We know where everyone is on the court.”

Mowery made seven field goals, mostly from the baseline areas, and hit 6-of-8 at the free throw line to account for her scoring.

Pottsgrove upped its record to 10-0 in the PAC Frontier and 17-5 overall, heading into the PAC playoffs next week. The Falcons also picked up a key victory in their District 1 Class 5A standings. They are sitting at No. 8 and hope to keep that spot to assure themselves of a first-round home game.

Phoenixville is 6-3 in the PAC Frontier and 12-9 overall. The Phantoms have a home game left against Pope John Paul II Monday night that will probably determine whether they qualify for the PAC playoffs as well as the District 1 playoffs.

“They (Phantoms) played so hard,” said first-year Phoenixville coach Brian Grashof. “They (Falcons) are good. They had good ball movement and number 40 (Mowery) played really well. She made some tough shots, especially in the second half. But I am very proud of my girls.

“It all comes down to Monday. We control our own destiny.”

Pottsgrove built a 13-point lead in the fourth quarter with 5:55 on the clock. Ludwig, another 5-10 junior, opened the fourth period with a rebound and then made a layup with an assist from Mowery. Simon converted a pass from Walker into another basket before the Phantoms called a full timeout.

The Phantoms came out of the stoppage with renewed vigor. Senior point guard Marlee Brown made a layup. Williams sank a layup with an assist by Brown. Green capped the 6-0 run with a driving layup to trim the Pottsgrove lead to 42-35 with 5:05 showing.

“They play hard and hustle,” Brendlinger said of the Phantoms. “They are not big, but they get the rebounds. Give credit to Brian with the way he coaches them. They play at a real high level.”

Pottsgrove’s second straight unbeaten run through the division was not to be denied in the end.

“I’m excited about districts and PAC playoffs,” Mowery said. “We went last year and we have really grown from last year. We want to go farther this year.”

Notes >> Simon, a 5-7 junior, does a lot of the ball handling for the Falcons. She had six rebounds, three steals and two assists go along with her scoring. … Walker had six assists, four rebounds, two steals, four points and a deflection. … Ludwig pulled five boards. … Potts added three rebounds, three assists and two steals to her scoring. … Falcons got support play from Jaimi Makins and Justine Fretz, two more juniors. … Williams finished with four steals, a blocked shot and an assist for the Phantoms. Green had two assists, a steal and a block. … Breisblatt ended up with five boards, one assist and one steal. … Freshman Jaime Michaud had six points, two steals and an assist and deflection for the Phantoms. Marlee Brown and four points, three rebounds, two steals and one assist. … Phoenixville also got good play from Atia Hall, Sammy Brown and Rachel Aselton. … Pottsgrove seventh and eighth grade girls had a scrimmage at halftime. … Pottsgrove senior choir members MacKenzie Van Horn and Alexa Krause sang the National Anthem.