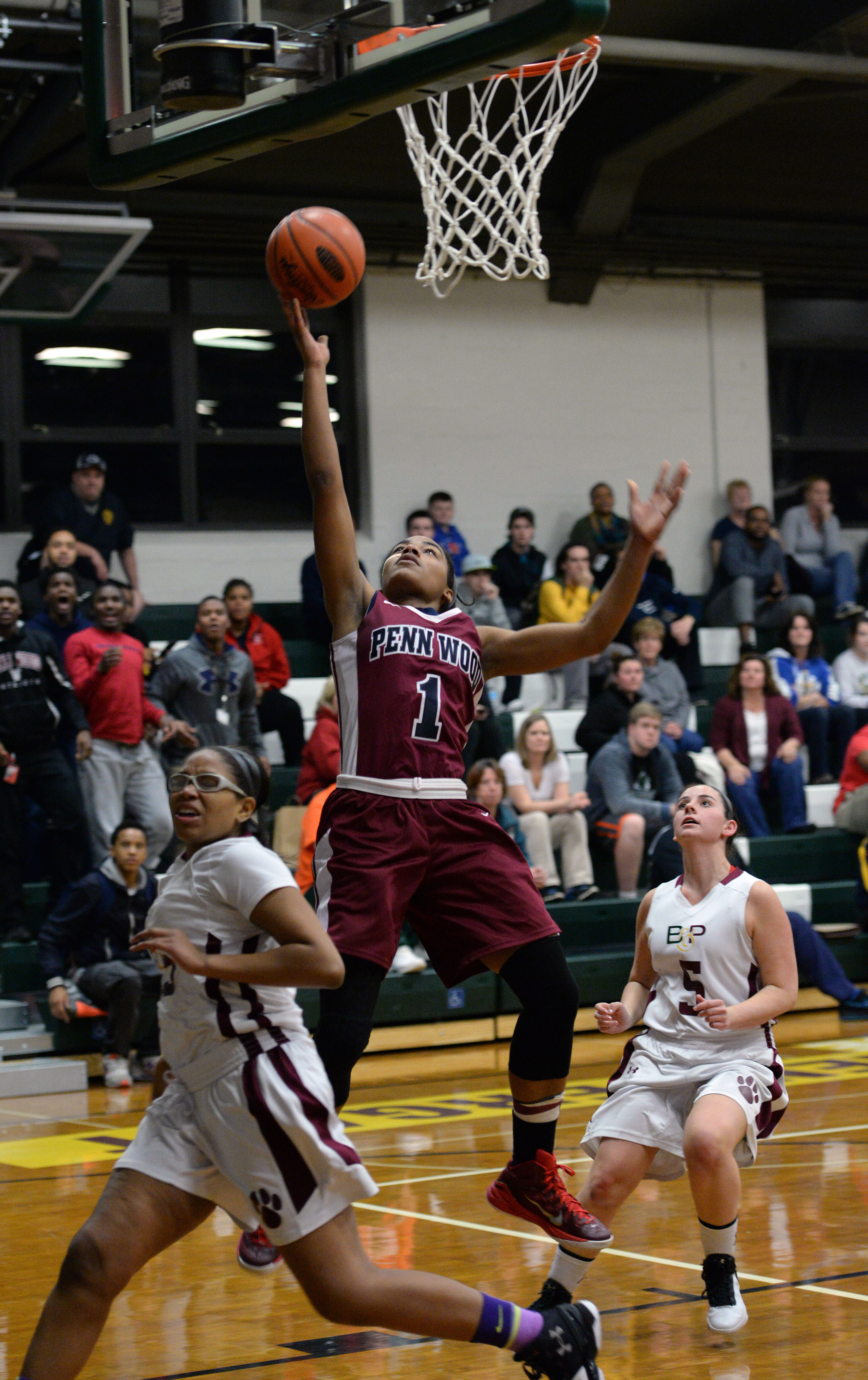 UPPER DARBY >> Nyah Garrison was having a birthday to remember when Caroline Manfre stepped to the foul line with less than a minute to play in the fourth quarter.

The sophomore Garrison scored a career-high 25 points Tuesday night, but Bonner-Prendergast wouldn’t have claimed a 59-57 victory over Penn Wood without the clutch free-throw shooting of Manfre.

Manfre was 7-of-8 from the line in the fourth period and hit the shot that gave the Pandas (3-0) the lead to stay. She kept her cool after clanking the first attempt when the game was knotted at 55-all.

“I was really nervous,” she said. “Almost had a stroke.”

Thank goodness, that wasn’t the case …

Meanwhile, Garrison hit a slew of big shots, too. She made a layup midway through the final period to even the score. The teams traded leads most of the second half once the Pandas (3-0) battled all the way back from a 15-point, first-half deficit.

Garrison, who turned 16 Tuesday, scored nine points in the third quarter to fuel the Pandas’ comeback.

“Even though we might not have had a good first half,” Garrison said, “we made it up in the end.”

Though Penn Wood turned the ball over twice in the final 50 seconds, Carle Andrews (12 points) drilled a long 2-pointer to make it a one-point game. After freshman Maeve McCann extended the Pandas’ lead back to a pair, Dahnye Redd charged down the floor in a last-ditch effort to tie the game and force overtime. The All-Delco missed her own putback as time expired.

“I thought it was in,” Bonner-Prendergast coach Tom Stewart said.

It was a tough setback  for the Patriots (1-4), who have played a stiff nonleague schedule that included a weekend trip

Penn Wood’s Carle Andrews fires a 3-pointer during Tuesday’s game against Bonner-Prendergast. Andrews finished with 12 points for the Patriots.

to Washington, D.C., for the She Got Game Classic and a season-opening loss to PIAA Class AAA power Bethlehem Catholic.

Redd was on fire early. The senior forward racked up 12 points, five rebounds and two steals in the opening period. She finished with 30 points and 10 rebounds, but it wasn’t enough to beat the Pandas, who recovered from a dreadful start to remain unbeaten. Bonner-Prendie committed eight first-quarter turnovers and trailed 30-15 in the second quarter before closing out the half on 11-2 run.

“We had the jitters in the beginning,” Garrison said. “As we calmed down and played, we just tried to shut (Redd) down and follow what Coach Stew was saying.”

The Pandas were catching their breath in the first quarter, but stayed afloat thanks in part to the effort of Princess Clemons, who missed all of 2014-15 with an ACL injury. Clemons improved as Tuesday’s game progressed, netting nine of her 13 points in the final stanza.

“It was a big win for us,”Clemons said. “Especially for me, coming back from injury and missing last year … I just want to be able to help my team.”

After Khaliah Gordon’s runner put Penn Wood ahead 55-53 —the fourth period included six lead changes — Clemons drove to the hoop to even the score again.

In the post-Alyssa Monaghan era, the Pandas, who qualified for the PIAA Class AAA quarterfinals last season, are off to an encouraging start.

“We’ve been playing really well the last three games and I just hope we can continue that,” said Manfre, who had nine points, seven rebounds, three assists and one steal. “This is a game where we really came together. I’m proud of everyone.”