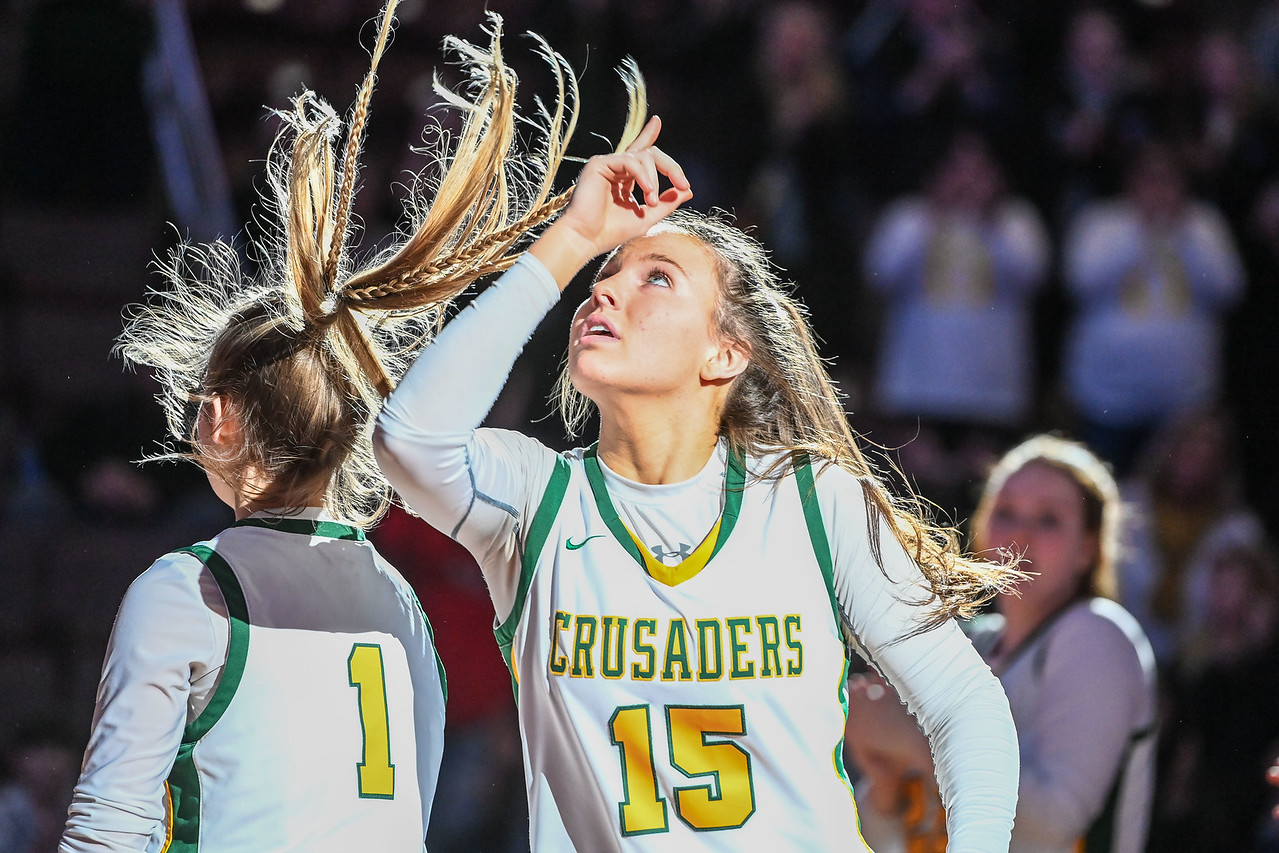 Lansdale Catholic's Gabby Casey (15) points upward while being introduced before tipoff against Archbishop Wood during the PIAA 4A girls basketball championship at the Giant Center in Hershey, Pa. on Thursday, March 24, 2022. (Mark Palczewski/For MediaNews Group)

The Lansdale Catholic girls basketball team hasn’t had much time to gel this offseason.

The Crusaders took some time off after the PIAA-4A state championship game in March and a busy summer hoops schedule in June and July kept the girls from getting together.

The A-Town Throwdown in Allentown last weekend was the first time the majority of the girls were together. The lack of chemistry didn’t matter and talent won out. The Crusaders went 5-0 in the outdoor tournament and won the championship with a 46-38 win over Bethlehem Catholic Sunday.

“We didn’t really have a rhythm in terms of this is who we are on offense and defense,” LC coach Eric Gidney said. “We just went in and I’ll say that talent is what got us through the tournament and winning it, not necessarily execution of our style of play because we haven’t been able to reinforce who we are and how we play offense. We had some new pieces and things like that and that made it a challenge, but we were just good enough to win the thing.”

The tournament featured a 15-team field with five three-team pools. LC won their pool, which included Reading and Liberty, Saturday to advance to the quarterfinals. They beat Emmaus in the quarterfinals, Pocono Mountain West in the semis and Bethlehem Catholic for the title.

Rising senior Gabby Casey was named the Most Outstanding Player of the tournament. The Saint Joseph’s University commit scored 25 points in the championship game.

“She produced a little bit more than half of our offense,” Gidney said. “She definitely came out and was like, ‘We are winning this whole thing’ and put the team on her shoulders really well.”

Newcomers included rising senior Jaida Helm, an Abington transfer, and rising freshmen Isabella Allen and Aubrey Mobley. Helm played a big role all over the floor. Offensively she knocked down some threes, drove to the basket and hit clutch foul shots. Defensively she was tough on the boards, blocked shots and drew a key charge in the final minutes of the championship game.

“Those three girls don’t really know our offensive stuff yet,” Gidney said. “They don’t really know our defense. We were very limited in the scope of what as a staff we were able to run – what plays and things like that. Really, really limited, but to still actually win the championship of that tournament was pretty impressive from that standpoint. It also leads to just tremendous optimism. What’s this going to look like once we get everything together and we get everybody on the same page?

“Even the girls that have experience… We just haven’t been able to see them. That’s been the, I don’t want to say challenge because it’s not a negative, because they’re playing AAU ball. They’re probably still used to running their AAU plays, whatever they run. The Rebels, the Belles, the Magic, whoever these girls are all playing for. To come back and run the LC stuff, it’s a weird transition right now.”

Lansdale Catholic will look to keep the momentum rolling this weekend with a three-day team camp.

Souderton’s Harter works her way to Northwestern
Girls Basketball Preview: Adamski, Olsen will be counted on at Garnet Valley