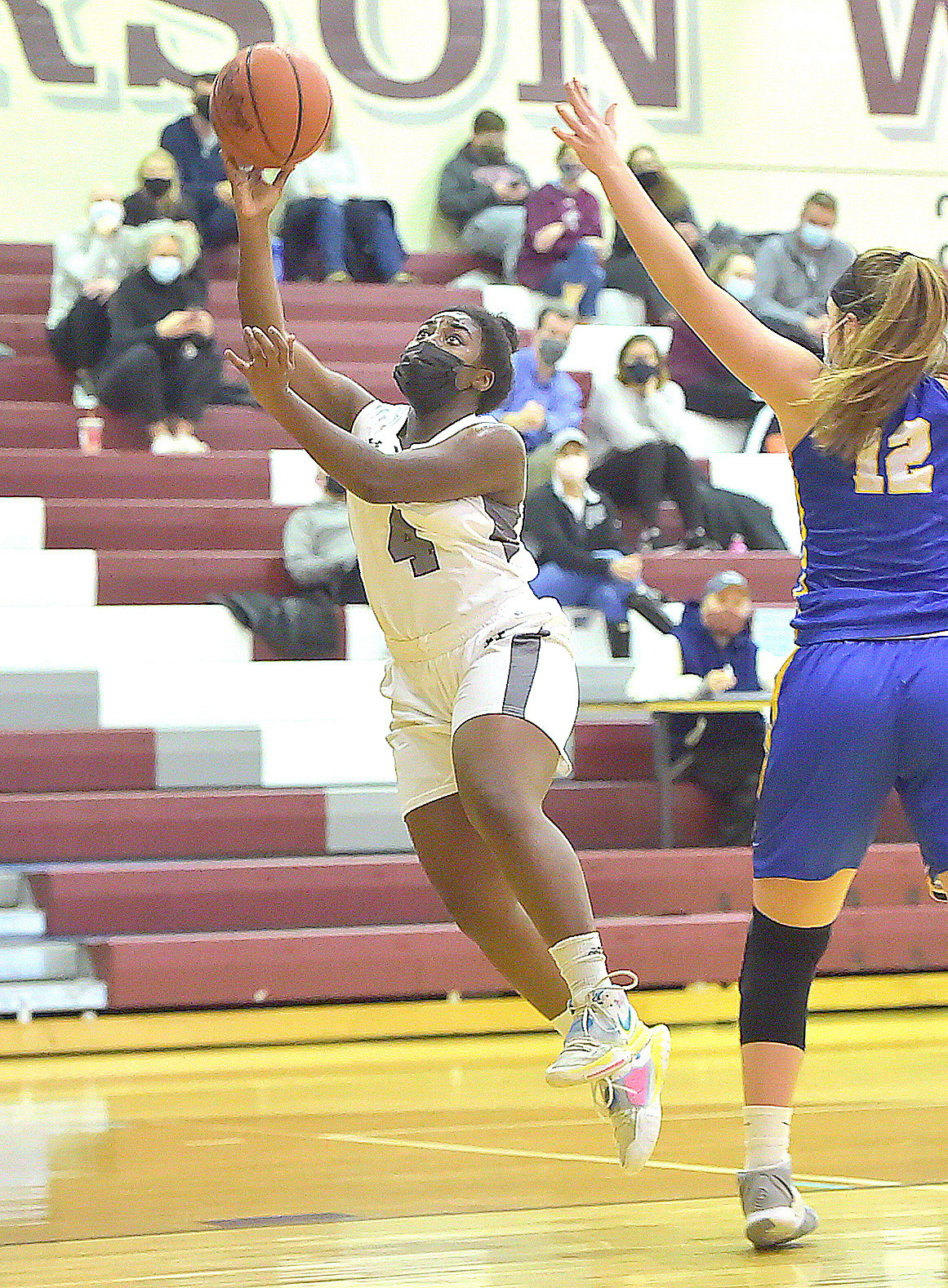 CALN >> The Coatesville girls basketball team picked the worst time to have an off-shooting night. Looking to stay in the running for a Ches-Mont Final Four berth, the Red Raiders were held scoreless for the final five minutes of the fourth quarter as West Chester Henderson pulled off a surprising 41-38 Ches-Mont League National Division victory Tuesday.
“Any win is a good win,” said Henderson coach Greta Neff. “Coatesville is tough. They got some kids who can knock down shots. We’ll take any win we can get at this point.”
The Red Raiders (6-4 Ches-Mont National, 11-6 overall) shot 26 percent from the floor on 14-of-55 shooting. They missed sevn of the 10 shots they took in the fourth period.
“It’s about understanding who we are,” said Coatesville coach Scott Barker. “Perimeter shooting, 3-point shooting is not our strength. We focus on playing good defense and taking care of the ball. I think our turnovers and our defensive breakdowns probably hurt us more than that. Henderson played a great game. They’re a good team, well coached. They executed better than us tonight.”
Henderson rebounded to gain a 22-19 lead at halftime. Coming out of the break, the Red Raiders decided to look inside and lean on Aidan Langley.
She scored the first six points of the second half to give Coatesville a 25-24 lead. Langley had eight points in the quarter and a team-high 14 points on the night.
“We wanted to try and get inside shots if we could,” said Barker. “They did a good job with their zone to limit that in the fourth.”
The Red Raiders scored five points in a row before Whitney Evans beat the buzzer with a 3-pointer to cut the deficit to 32-31 after three quarters.
Langley had two more baskets early in the final stanza to push the advantage to 36-33, before Evans hit one of her four treys to tie the score.
Alexis Fields hit a driving layup for a 38-36 edge with 5:04 left. But, little did Coatesville know, that would be the final points for them on the night.
Henderson’s Emma Adams scored off a feed from Evans to knot it at 38-38 with 3:25 left. Seconds later, Evans made two free throws to put the Warriors (4-5, 4-11) up 40-38 with 3:12 remaining.
Henderson ran the four corners as the time kept coming off the clock. Evans made one of two from the free throw line with 13.4 seconds left for a 41-38 lead.
Coatesville’s final chance did not result in a good shot as the Warriors frustrated them and Danae Ellzy’s desperation, off-balance three fell well short to complete the upset.
“They played good defense. We knew we had to get a 3 and that’s a tougher shot to get in that situation,” said Barker. “They have to defend the 3-point line. I think we did the best we could do with that.”
Evans was instant offense coming off the bench. The sophomore was 12-of-14 from the line to go along with her four makes from long distance to give her 24 points.
“We played really good today,” said Evans. “I knew if I beat their big down the court it would be easier for transition points. I looked for my teammates under the basket and tried to score.”
Evans’ ability to get to the basket helped open things up for Henderson’s forwards for key baskets.
Ellzy added 14 points for Coatesville, but it was all in the first half.
The Red Raiders won’t have to wait long to get the loss out of their mouths, as they host Boyertown today in a makeup from last Saturday. The Warriors continue a busy week by visiting Harriton for a nonleague contest.