Bell sisters finally ringing in the new season together at Ridley 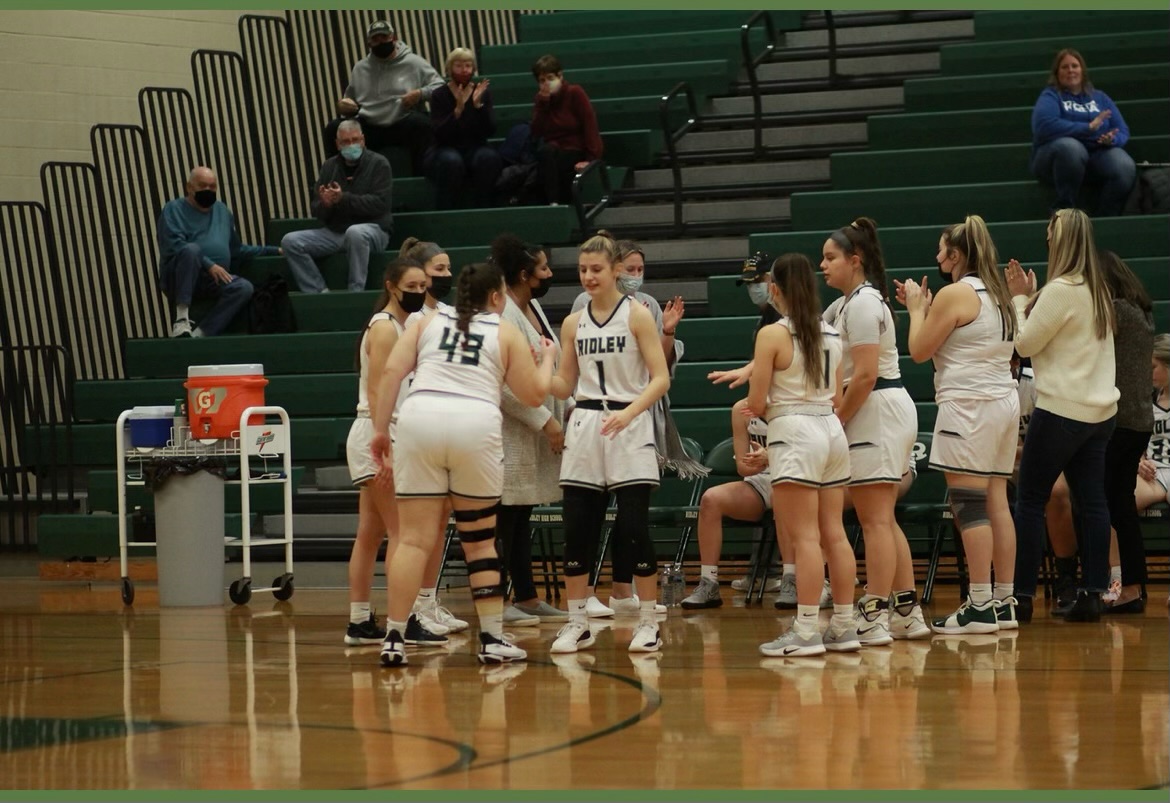 RIDLEY TWP. — Two sisters separated by two grades at Ridley have forged an unbreakable bond as a result of one’s determination to get back on the court, no matter what life throws her way.

The first time senior Jenna Bell blew out her knee was in the summer before her eighth grade year. She suffered the same injury, to the same knee, two years later.

Jenna’s dreams of playing for the 2019-20 Ridley basketball team that won a Central League championship were dashed.

Understandably, she began to wonder whether she’d ever get the opportunity to play varsity hoops. But despite the setback, Jenna showed up to practices and games to support her teammates. She was there every day.

“I sat on the bench, I cheered, I took notes. Anything I could do, I just wanted to be there,” she said.

Kailyn Bell, by this time, was in the eighth grade. She was the type of talented up-and-comer many high school coaches rave about, the middle-school kid who in a year’s time would play varsity as a freshman and make an impact. But as she worked on preparing to play in high school, Kailyn provided emotional support for Jenna, who had made it clear that another devastating, season-ending knee injury would not deter her from playing the game she loves.

“What I learned is that she’s probably the hardest worker I’ve ever met,” Kailyn said of her sister. “From the first time she got hurt, the amount of time she spent in physical therapy, working outside late at night in the driveway, working downstairs in our basement to get her knee back to where it was before. She put in a ton of work. And when she tore her ACL for the second time, I knew … it was going to be hard for her to even make that decision if she wanted to play again. Because, you know, some people don’t want to put in that work. But when I knew that she wanted to put in that work, I was like, I’m playing for her … she better be ready by the time I’m in high school.”

As freshman Kailyn helped the Green Raiders make a return trip to the Central League final last winter, she remained inspired by her big sister’s work ethic and resolve. While Kailyn played alongside then-senior captains Lindsay Boyd, Shannen Hinchey and Kylie McNicholas on varsity, Jenna was grinding away on the JV team, catching up on lost time and keeping her eye on getting fully healthy in time for her senior season. At long last, the Bell sisters would be on the same team.

Ridley High basketball players Kailyn and Jenna Bell have supported each other while waiting to play with each other for the Green Raiders.

“It’s awesome because we have never played with each other before. Last year I didn’t play that much and this year she pushed me to get better and I’ve pushed her to get better,” Jenna said. “Now that we are on the same team, it’s a perfect match.”

Ridley coach Roe Falcone, a player’s coach if there ever was one, loves what the Bell sisters bring to the program. They have different styles and personalities, but that’s what makes them such a great duo.

“(Kailyn) is a point guard. She told me she got in trouble with her dad one time when she shot a 3-pointer in an AAU game and did the “3” sign. I like that, I want that swag. I’m not the kind of coach who says ‘No, no, you can’t do that.’ I like the personality and she has that,” Falcone said. “Whereas with Jenna, she’s very cerebral and she’s a 3-point shooter. It’s funny to see how different they are but how they also support one another. They’re just great kids.”

Jenna and Kailyn were on the floor together for a scrimmage against Unionville. Kailyn drove the lane and kicked out to Jenna, who shot a wide-open 3-pointer. They joked with Falcone that their father could live forever happy after seeing his girls team up for a basket.

There will be more Bell connections to come this season, even after Jenna hit another roadblock on her journey earlier this month when she tested positive for COVID-19. She was forced to miss Ridley’s first couple of games this season. That meant a lot of Facetime calls with her sister in the same house.

“It was right before opening weekend and I’m like, here we go. It’s like they don’t want me to have good things,” Jenna said, laughing. “But that’s all right. I was sitting at home and watching the games on TV and I was sitting up and yelling at the TV, just like I would be on the bench. It just gave me motivation to work on myself and get my lungs back so I could be ready to go when I got back.”

It is not surprising to know Jenna has evolved into a player-coach. She appreciates the intricacies and attention to detail that coaching requires…and she’s pretty good at it. During her recent respite from the team, Jenna analyzed game film of an upcoming opponent and provided a scouting report of sorts to Falcone.

“When I didn’t play my sophomore year, (Falcone) always said that she wanted to keep me in check mentally and make sure I kept my head in the game,” Bell said. “I would come up to her off the bench my sophomore year and say, ‘This is what I’m seeing.’ And she would listen to me. Some coaches would not listen to the injured girl sitting on the end of the bench taking notes, but she’s listening to me and taking my suggestions.”

Jenna was cleared after the protocol period and made her season debut on Dec. 17 against Conestoga. She entered the game in the fourth quarter of a 34-22 loss to the Pioneers. In Ridley’s next game, at home against Haverford on Tuesday, she saw playing time in the final two quarters.

“It felt weird to me, it (was) something that I’m not used to. I’ve never had quality varsity minutes and I’ve never had this role before,” she said. “It definitely felt weird, but I’m getting my feet under me so I’m relaxing a little bit.”

Kailyn can’t help but feel immense pride for her sister, knowing how hard she worked and all that she had to overcome two major knee surgeries. The Bell kids plan to make the very most of their one season together on varsity and try to take in every moment.

“Ever since we were little, my dad always said, ‘My dream is to have either one of you pass to the other for a nice jump shot.’ That’s immediately what I thought when she was in the game, like I need to make this happen,” Kailyn said. “It was a great feeling to finally be able to play with my sister and be on the same court together. It was just an awesome feeling.”